Rupert Murdoch: The last of the great press barons? 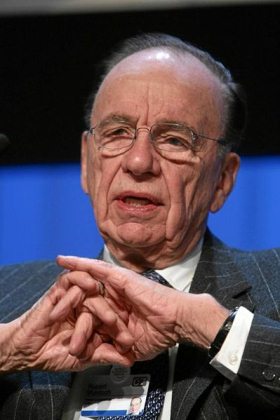 When Rupert Murdoch testified recently to the parliamentary select committee enquiring into phone-hacking by the News of the World, he paid an emotionally charged but barely noticed tribute to his father. This was Sir Keith Murdoch, who had made his name by courageously exposing British bungling at Gallipoli in 1915 and afterwards became head of the respected Herald newspaper group in Melbourne, Australia. Rupert professed to be humbled by the failings of the News Corporation he had erected on the foundation of Sir Keith’s ideals and achievements.

Most of this was myth. Keith Murdoch had depicted the admittedly frightful situation at Gallipoli in tabloid fashion and his report was a miasma of errors and exaggerations. But his sensational account appealed to Lord Northcliffe, the leading press baron of the day, whose protégé he became. Back home in Australia Keith was known as ‘Lord Southcliffe’. He employed ruthless measures in Melbourne’s circulation wars, building a drab fortress on Flinders Street and turning his work-force into a private army. Keith also used his media to bully politicians such as Prime Minister Joseph Lyons, who got him a knighthood and advanced his interests. Keith once said that he had put Lyons into office and he would put him out. At the same time Keith stressed the vital need for an ethical fourth estate. Dishonest journalism was not only a betrayal of trust, he proclaimed, it was just plain stupid ‘for the Australian public soon finds out’.

As all this suggests, Rupert Murdoch is best understood in historical perspective. He exists in direct line of succession to the media magnates of the past, those gaudy, predatory beasts in the newspaper jungle. They were men of mercury, often unstable, unscrupulous and dictatorial, who infused their organs with a restless energy and an insatiable lust for private pelf or power. Despite current wholly justified outrage about the alleged crimes of the News of the World and the resulting inclination to demonise Rupert Murdoch, he is no worse than many of his predecessors. In some respects (especially when compared with the likes of the former Mirror group owner, Robert Maxwell) he is better.

William Randolph Hearst, pilloried in Orson Welles’ 1941 film Citizen Kane, gave regular paid employment to hoodlums in a way not seen until the rise of bootlegging during the Prohibition era. They not only terrorised striking journalists on the Chicago Examiner (themselves apt to extract information by vile means) but promoted its circulation by assaulting news vendors, about 30 of whom were murdered. In Australia Rupert Murdoch was tame beside such brutal, violent, racist, blackmailing Autralian press gangsters as Ezra Norton and Sir Kerry Packer. Where Murdoch would enter 10 Downing Street by the back door, the megalomaniac Northcliffe, after an unsatisfactory meeting with Lloyd George, slammed the front door so loudly that the duty policeman thought a bomb had exploded.

Politicians feared newspaper tigers but took courage from the fact that they might savage each other, such was the salutary diversity of the press. In the Commons in 1919 Lloyd George referred to Northcliffe’s ‘diseased vanity’, tapping his head significantly. In 1931 Stanley Baldwin dished Beaverbrook and Rothermere with Kipling’s famous phrase about their exercising ‘power without responsibility – the prerogative of the harlot throughout the ages’. Franklin Roosevelt squashed Hearst so flat that he felt as if he’d been run over by a steamroller.

Rupert Murdoch, though, became a serious menace when he created an unprecedentedly large media conglomerate. He did so in part by intimidating and cajoling politicians, mounting virulent attacks on liberal foes via The Sun or Fox News and supporting right-wing allies in return for commercial concessions – such as Tony Blair’s repeal of the ban on alien ownership of television companies and David Cameron’s pledge to emasculate Ofcom. With power came hubris, which in turn spawned corruption. How far this went has yet to be determined, as have the consequences for News Corporation.

Perhaps democracy can cut this monstrous growth down to size, yet Thomas Jefferson’s caveat is pertinent. In 1813 he deplored the malignity, vulgarity and mendacity of newspapers. But he added that this was ‘an evil for which there is no remedy; our liberty depends on the freedom of the press, and this cannot be limited without being lost’.

Piers Brendon is a Fellow of Churchill College, Cambridge.