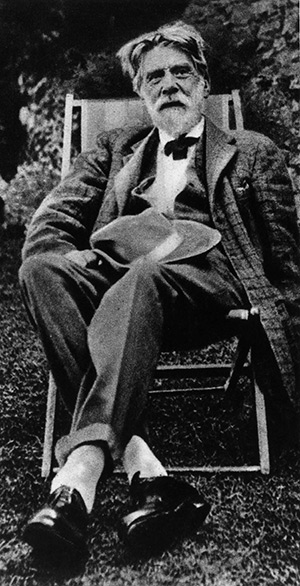 He is largely forgotten now, but at least Robert Bridges has not suffered the ignominy heaped on his predecessor as Laureate, Alfred Austin, who had the misfortune to succeed a poet manifestly in a completely different league, Alfred, Lord Tennyson. Born at Walmer in Kent in 1844, Bridges grew up in a prosperous High Church Anglican family. After the death of his father in 1853, when the boy was nine, his mother married the vicar of Rochdale and the family moved there. He was educated at Eton, where he made a lifelong friend in the composer Hubert Parry, and then at Corpus Christi College, Oxford, where he wrote poetry, distinguished himself on the river and made friends with another poet, Gerard Manley Hopkins.

Bridges trained as a doctor and was taken on at St Bartholomew’s Hospital in London, but poetry was his passion and his first volume of verse came out in 1873. He retired from medicine in 1882 and two years later married Monica Waterhouse, daughter of the architect Alfred Waterhouse, virtual squire of the Berkshire village of Yattendon. They had family money and they lived happily in Yattendon until 1905. They built a house at Boar’s Hill, outside Oxford, in 1907.

Alfred Austin died in 1913 and the laureateship was offered to Bridges, who felt it his duty to accept, though with justified misgivings. He did not write poetry readily to order and there were complaints in Parliament during the First World War that he was not writing enough. Gerard Manley Hopkins had died in 1889 and in 1918 Bridges published an edition of his poems with commentary, which brought Hopkins to public attention for the first time.

In the introduction to his Oxford Book of Modern Verse in 1936 W.B. Yeats wrote admiringly of Bridges giving lyric poetry ‘a new cadence’ with ‘words often commonplace made unforgettable by some trick of speeding and slowing … or by some trick of simplicity …’

I heard a linnet courting
His lady in the spring:
His mates were idly sporting.
Nor stayed to hear him sing
His song of love.
I fear my speech distorting
His tender love.

As well as poems, some set to music by Parry and Gustav Holst, Bridges wrote plays, hymns and translations, including ‘Jesu, Joy of Man’s Desiring’, literary criticism and essays. He also took a keen interest in revising the spelling of English. He was appointed to the Order of Merit in 1929 and died at Boar’s Hill the following year, aged 85. He was buried at Yattendon. John Masefield succeeded him as Poet Laureate.