Shut Up and Eat!

Does silence endure in Italy over Mussolini’s murderous regime?

John Foot opens his book on fascist Italy with a family anecdote: a convivial mealtime discussion in which his great-grandmother reminisced fondly about life under the dictatorship. I recall lunching at my own grandmother’s table, hearing her refer to her youth in 1930s Italy. She told a joke: over dinner, a small boy asks his father: ‘Daddy, what’s fascism?’ The father replies: ‘Shut up and eat!’

‘Shutting up’ lay at the heart of fascism and has dogged its afterlife. Despite the work of generations of historians, silences endure in Italy concerning Mussolini’s murderous regime. This matters: the resurgence of fascist parties and movements around the world makes it essential to understand the origins of totalitariansim. Instead of shutting up and swallowing the narratives we are sometimes fed, Foot digs into the real lives of Italians under fascism, in all their messy complexity. He is not the first to focus on the history of everyday life, but his fascinating book offers a new and disturbing reading of the Fascist era and its origins – a third of the text explores the years before the seizure of power in 1922.

Historians of Italian fascism often focus on the 1930s – the so-called years of consent, when the regime was at the height of its powers. Foot raises a new and unsettling argument: coercion and consent are not alternatives, but complementary. Fascism was brutal, violent and terrifying – and many people embraced it anyway. Some may even have embraced it because of its brutality, like the thug Piero Brandimarte from Turin, who complacently described the ferocious massacre of at least 11 antifascists in December 1922 as ‘pure revenge, organised and led by me’.

Accounts of fascism have often focused on its aims and ideology. Foot sets out to show how it seized and wielded its power through violence. We hear in horrifying, often moving, detail about victims and perpetrators on all sides in the fateful postwar years, though he tells us rather less about the bystanders, including the biggest bystander of all: the state. As Blackshirts attacked left-wingers across the country, local authorities turned a blind eye – or joined in. When a revolutionary socialist was elected mayor of Bologna in 1920, armed fascists attacked the crowds of supporters gathered to celebrate his official inauguration. Chaos followed and 11 people were killed. The prefect and police chief were informed at least three days earlier of the fascists’ violent intentions but did nothing. After the massacre, blame was heaped on the socialists (who formed the majority of the dead) and more than 60 local militants were arrested. The failures of police, prefects and parliamentarians, as well as the army and the king, to defend democracy and the rule of law between 1919 and 1922 gave fascist violence free reign. Their silence made space for fascist power.

Fascists weren’t the only perpetrators. The turbulent 1920s saw anarchist bombs, anti-fascist ambushes and assassination attempts against Mussolini. By the 1930s anti-fascism had been brutally crushed at home and the regime turned against new targets: Libyans, Ethiopians and Italian Jews. The Second World War brought new horrors, ultimately leading to a form of fratricidal civil war. By 1945 the legacies of Blackshirt aggression came home to roost; anti-fascists adopted extreme violence in brutal purges and revenge. In Blood and Power John Foot presents a compelling kaleidoscope of individual stories that break through fascism’s historic silences.

Vanda Wilcox is the author of The Italian Empire and the Great War (Oxford University Press, 2021). 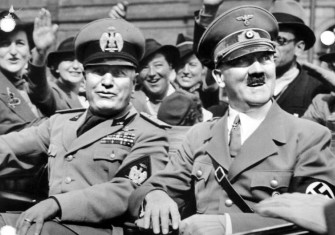