Ann Natanson reports on a new scheme to restore the Roman Colosseum to its former gory glory. 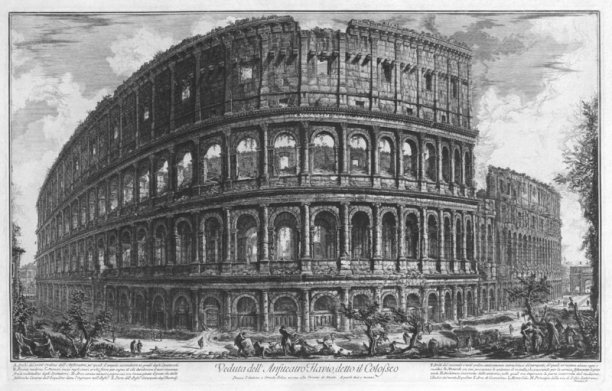 Italy’s most popular monument, with up to six million visitors a year, is feeling its age. Its massive size and long life grants it some dignity, but recent news reports place it on the level of a bedraggled theme park.

In August a hoax bomb, consisting of a tin can with suspicious-looking wires, closed down the monument for two hours and resulted in the forced evacuation of angry tourists. The mayor of Rome, Gianni Alemanno, visited the site and found to his dismay that no bomb detection scanners were in place, nor was there any continuous link up with local police. A few days later 20 fake ‘centurions’ were arrested in an attempt to end their gang wars as well as their hassling of tourists regarding payment for posing with their cardboard weapons.

Is this the monument which so struck the poet Percy Bysshe Shelley in 1818 that he proclaimed: ‘The Coliseum is unlike the work of human hands I ever saw before. It is of enormous height and circuit, and the arches built of massy stones are piled on one another and jut into the blue air, shattered into the forms of overhanging rocks’?

The construction of the Colosseum was begun by the Emperor Vespasian in ad 72 and finished by his son Titus in ad 80. The building’s first name – the Flavian Amphitheatre – was taken from the praenomen, Flavius, of the two emperors. The inaugural festivities lasted 100 days and 5,000 wild beasts are said to have been killed in one day – ostriches, tigers, lions, panthers, bears and hippos – certainly a record. Not surprisingly North African elephants became extinct in this period due to their use in arenas. Combat between gladiators and wild animals was said to be the most popular event, but there were many variations and all were fights to the death. All kinds of weapons were used – swords, nets, tridents, daggers and offensive shields – and the people involved, included professional gladiators, convicted criminals, Christians, hunters, dwarves and even women. The arena was decorated with sets representing woods and deserts and on occasion it was flooded and equipped with small boats to imitate a sea battle.

Not all Roman citizens loved arena performances. The philosopher Seneca complained that a mid-day show he attended was ‘pure murder’ and the men involved had no protective covering. Also during the intermission the crowd shouted, greedy for blood: ‘Let’s have men killed meanwhile! We can’t have nothing going on!’

Fifty years later, as an embellishment, Hadrian ordered the transfer of a huge bronze statue to a site near the amphi-theatre. The statue was 30 metres tall and known as the Colossus of Nero. The transfer was achieved, with the statue standing upright, by 12 pairs of elephants. By the end of the eighth century the statue must have been demolished as it was no longer mentioned by travellers. The amphitheatre ever after took its name from the hated emperor’s statue and not, as many believe, from its size.

The amphitheatre was the inspiration for numerous similar but smaller buildings, numbering more than 180 throughout the Roman Empire. Its form was elliptical to allow maximum capacity – between 40,000 and 50,000 places. At the lowest level the sand-covered stage or arena was topped by a wall to keep spectators safe from the lunging combatants.

Following the fall of the Roman Empire the Colosseum played many roles: as a fortress, convent and hermitage. It also suffered from lightning strikes and earthquakes but, most damaging of all, it was used as a quarry and handy source of building materials. Its stones were used to make the steps of St Peter’s Basilica and innumerable churches of the Baroque era’s building boom. Two hundred years later subsequent popes stopped the quarrying and made attempts at some restoration. The many martyrdoms of professed Christians in the arena are now remembered every Good Friday by a candlelit procession through the archways led by the pope.

From this year more care is to be taken of the Colosseum. A special appeal for a sponsor from private industry was made last year and Tod’s, the Marche-based maker of fine shoes, came forward with a 25 million euro offer to pay for a three-year project of cleaning and urgent restoration. Its owner, Diego Delle Valle, has promised not to slip in some surreptitious advertising for their pimple-soled car shoes.

As with the Louvre’s pyramid and the new entry to the Vatican Museums, body scanners and cloakrooms will be introduced to the Colosseum, as well as meeting places for tour groups. Centuries of grime deposited on the travertine marble exterior will be removed, giving it a lighter, brighter appearance.

The most important changes relate to the opening up of other floors of the monument, some never accessed before by tourists. This will allow small groups to descend with a guide to the dark corridors of the Hypogeum below the arena, where caged animals and gladiators waited to be hoisted into action. Visitors will also be allowed to climb to the third tier of the amphi-theatre where they will have wonderful views of the whole interior and outwards, looking north-west to the Forum and the Capitoline Hill. In addition they will be able to see where sailors stretched canvas sails over the whole area and visit the topmost tiers of seats, supposedly available to Roman women after a strenuous climb.

In 2014, when the work is scheduled to be completed, 85 per cent of the structure will be open to tourists as against the present figure of only 15 per cent. One of the world’s great buildings will be revealed as never before.

Ann Natanson is a journalist based in Rome.