Persepolis: the Monument of Xerxes

The monumental city of Persepolis was the pride of the Persian empire until its destruction by fire. Richard Stoneman revisits its builders, Darius and Xerxes, and their role in its construction. Rock relief of Xerxes being accompanied by two servants, Persepolis, Iran by Nick Taylor. Licensed under CC BY 2.0 via Wikimedia Commons.

In his 1967 article on Persepolis, the ceremonial capital of the Achaemenid Persian empire, George Woodcock provided a vivid account of the building of this monumental complex of palaces, known to the Greeks as 'the Persian city'. He sees the master plan as that of Darius I (r. 522-486 BC) but notably underplays the role of his son and successor, Xerxes (r. 486-465 BC),

in the completion of the complex. Most notably, Woodcock credits Xerxes with the building of the Gateway of All Lands but does not point out that its erection completely changed the direction of approach to Persepolis.

Xerxes made his mark on the plan of Persepolis as soon as he took over. How radical were the changes? One scholar supposed that the entire complex was a building site, unusable as a palace, until the reign of Xerxes' successor Artaxerxes I, but this seems unlikely. Xerxes blocked Darius' south entrance and created a new north-western stair, which Ernst Herzfeld, the excavator, called 'perhaps the most perfect flight of stairs ever built'. Its shallow ascent enabled the Persian court dignitaries to ascend, without getting out of breath or having to hitch up their colourful robes, to a grand entrance, the Gateway of All Lands, through which one still enters the complex.

The name is given by Xerxes' inscriptions: 'By the grace of Ahura Mazda, this Gateway of All Lands I made; much else that is beautiful was done throughout Parsa which I did and which my father did.' In fact 'Gate' is something of a misnomer, since the building has the form of a roofed hall with a bench, in effect a waiting room. The visitor, then as now, was greeted by the massive guardian bulls that flank the eastern doorway at the top of the stairs. Inside, the cedar beams of the roof were supported on columns 16.5m high; the walls were tiled with designs of rosettes and palm trees.

The adjoining 'harem' – as it was designated by the excavators – bears one of the longest of Xerxes' inscriptions, which describes how Darius chose Xerxes as his legitimate successor, as 'the greatest after himself'. Its layout suggests that it was residential but there is no reason to suppose that it was really a harem as known from the Ottoman Empire, this is simply extrapolation from the Greek report that the Persian king had 360 concubines (one for almost every night of the year) and the assumption that Xerxes' only interests after being humiliated by the Greeks were sex and architecture, here conveniently combined in a single structure.

Next to the 'harem' is the Treasury. This was built by Darius but was extensively altered by Xerxes, who cut off the western parts to make room for the 'harem' and created a new entrance on the east side. In this building was housed a vast archive of clay tablets, written in Old Persian and Elamite, dating from 492-458 BC, and supplying a great deal of information about life in Achaemenid Iran. (Several thousand more were found in the northern fortifications.) Work on these had scarcely begun when Woodcock wrote: they give information on the rations and payments made to some 15,000 individuals in over 100 localities. Presumably it was here that Alexander discovered the treasure of 120,000 talents in gold and silver, all of which he took away with him, a task requiring quantities of mules as well as 3,000 camels.

Why was Persepolis destroyed? Woodcock offered two alternatives: the traditional one, that it was burnt as the result of a drunken revel led by an Athenian courtesan, and the view of some historians that it was an act of policy, revenge for Xerxes' destruction of the temples of Athens in 480 BC. It has become apparent that the fire set by Alexander the Great in 330 BC was particularly fierce in the buildings erected by Xerxes, which seem to have been singled out for destruction. So the romantic legend of the drunken revel should probably be laid to rest.

But in the 470s that disaster lay far in the future. Xerxes could be proud of his achievement. 'Me may Ahura Mazda together with the gods protect, and my kingdom, and what has been built by me'. Persepolis is Xerxes' monument as much as Darius'.

Richard Stoneman's book, Xerxes: A Persian Life, will be published by Yale University Press in August 2015. 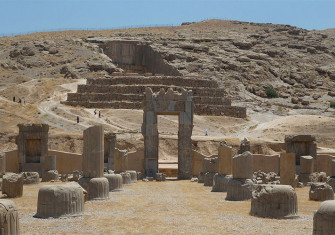