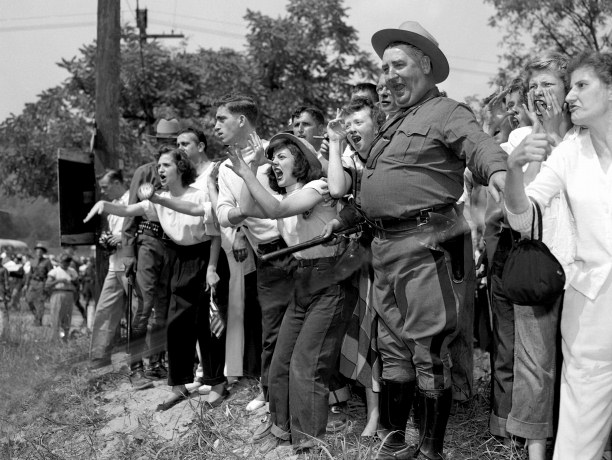 Angry locals from Westchester County, New York shout hate-filled insults at the carloads of concert-goers arriving to hear the singer Paul Robeson, the most famous African-American of the day, perform at an open-air concert in Lakeland Acres, north of Peekskill, on September 4th, 1949. A state trooper smirks and does nothing.

The first attempt to hold the concert, in aid of the Civil Rights Congress, on August 27th had to be called off when the audience was attacked, Robeson was lynched in effigy and a cross was set on fire – the symbol of the Ku Klux Klan. The police did little to intervene and 300 hostile young veterans made their presence felt. Why was there such bitterness now, when Robeson had already performed at three concerts in the neighbourhood without incident? There was not much secret about his sympathy for Soviet Russia, his anti-war stance and calls for the decolonisation of Africa – both labelled as Communist causes – or his championing of civil rights. But in June he had attended the Soviet-sponsored World Peace Conference in Paris and remarks he made there were grossly misquoted. It was claimed he said that the US government was similar to Hitler and Goebbels and that it was unthinkable that American negroes would go to war against Russia on behalf of those who had oppressed them.

The US emerged from the Second World War as a better-integrated country, but African-Americans remained the exception. Much of the country was segregated as, by-and-large, its armed forces had been throughout the war. It may have been a crusade for freedom, but it was selective in its definitions. When racism was mixed with the fear and hatred of Communism stirred up by the coming of the Cold War it made for a powerful cocktail. Hence the cries of ‘dirty nigger-lovers’ and ‘dirty Commies’ at Peekskill – even ‘dirty kikes’, since the concert organiser, Helen Rosen, a local friend of Robeson’s, was Jewish.

Once news about the scenes on August 27th circulated, left-wing trade unions decided that they would ensure its successor on September 4th did take place. Twenty thousand made it to the venue and 2,500 trade union members formed a human wall to ensure the concert was not interrupted. The real trouble came as people left afterwards. Cars were hit by a hail of stones and rocks, which had been stockpiled by locals and veterans on the roadside. The vehicle in which the singers Woody Guthrie and Pete Seeger were travelling had windows smashed, while police and state troopers did little to prevent the violence.

These events foreshadowed the anti-Communist witch hunt which was to begin under the leadership of Senator Joe McCarthy in the following year, using the hysteria stirred up by fear of the ‘Red Menace’ to persecute Democrats, intellectuals and Hollywood figures. Paul Robeson, for his part, had his passport withdrawn.

It was not until the end of 1954 that McCarthy was finally discredited.