The lessons contained in Ælfric of Eynsham’s Colloquy are impervious to time.

Earlier this summer I found myself standing in front of a group of schoolchildren dressed as Anglo-Saxon warriors, along with a collection of civic dignitaries, clergy, press and interested locals. We were gathered in the village of Eynsham in Oxfordshire to unveil a plaque commemorating a famous Anglo-Saxon resident: Ælfric of Eynsham, one of the most prolific and influential writers of early medieval England.

Ælfric came to Eynsham in 1005, after a career as a monk at Winchester and Cerne Abbas, to become abbot of a monastery founded there. As a writer, he is best known for his two great cycles of English Catholic Homilies and his collection of saints’ lives – compilations which between them were intended to provide sermons for every significant date in the church year. These collections demonstrate Ælfric’s remarkable gifts as a teacher, interpreter and communicator, as he translates and explains many different kinds of biblical, theological and historical material, adapting it into English to suit the needs of his Anglo-Saxon audience. Besides these, he also wrote letters of pastoral guidance and works for use in the monastic classroom, including a Latin grammar said to be the first textbook written in English.

Almost all Ælfric’s writing is educational in its approach; he was a teacher in everything he did, constantly thinking about how best to explain complex ideas to his audiences. It was this which made his work influential, not just in his own time but over centuries. Many of his texts survive in far more manuscript copies than most Old English works, an indication of how widely they were read; as long as his writings were useful for people engaged in preaching and teaching, they continued to be adapted and reused.

They still are. On that day at Eynsham I thought of one of Ælfric’s most appealing works, his Colloquy. This is a lovely example of his teaching, a lively dialogue in which schoolboy monks, to practise their Latin, learn through role play – not unlike those children dressed up as Anglo-Saxon warriors. The boys take the roles of workers in different trades: ploughmen, shepherds, hunters, fishermen, and so on. Their teacher questions them about their jobs and they describe their daily life. Some complain how hard their work is, while others boast about their skills and success. The relationship imagined between teacher and students is playful and friendly – the teacher teases the boys as he questions them and their replies are rather cheeky.

The boys are learning a serious lesson, though, along with Latin grammar. They’re learning how different people approach their daily work, exploring the lives of groups in society they might not otherwise have encountered. Much of the discussion focuses on the idea of being useful: which trade provides most benefit to society? The characters squabble over who is most useful, but are taught that all are valuable, because all depend on each other. Each needs the ploughman to provide them with food, but the ploughman needs tools made by the blacksmith, and so on with every trade. Society is so interconnected that all kinds of labour have value; the important thing is to put your whole self into your craft, to ‘be what you are’, so everyone may benefit from each other’s work.

Ælfric’s own life’s work was teaching, whether in the classroom or through his writings. I think he would have been glad to know that a thousand years later his Colloquy is often used (in its Old English translation) by beginner students of Old English. He cared deeply about passing on knowledge and communicating what he believed to be true and important; it would have mattered to him that his work is still useful today.

For Ælfric, teaching was a cyclical process, shaped by the repeating cycle of the church year that structures his collections of homilies. It involved sustained work of return, recollection and renewal, as the teacher, gathering up what they have learned from their own teachers, presents it afresh to another generation of students. Like the labour of the craftsmen in the Colloquy, this work is part of an interconnected process in which no one stands entirely alone. All teachers were students first: ‘Long must he study who is to teach’, as Ælfric wrote in one sermon. At the start of a new academic year, another cycle of teaching and learning begins again. In one sense Ælfric’s labours ended at Eynsham a millennium ago, but while his works are read his teaching carries on, year after year.

Eleanor Parker is Lecturer in Medieval English Literature at Brasenose College, Oxford and the author of Conquered: The Last Children of Anglo-Saxon England (Bloomsbury, 2022). Buy from bookshop.org (affiliate link). 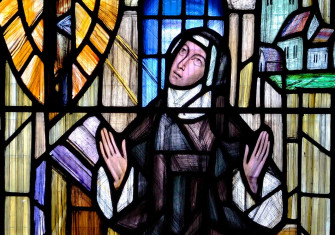 All That Is Not Good