Peter Riddick looks at the way oral history can add another perspective to our understanding of situations and events. 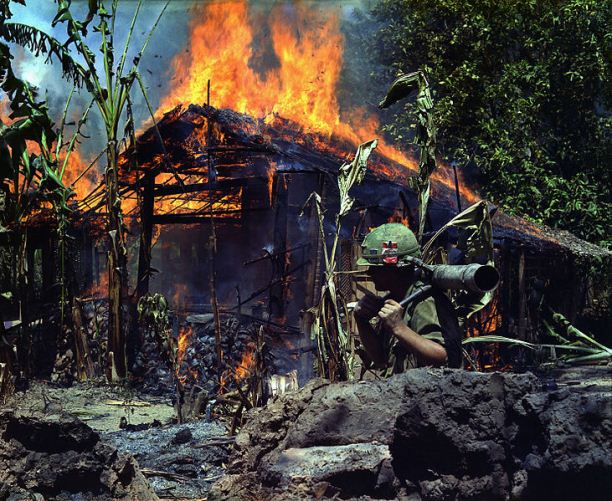 The United States' involvement in the Vietnam War during 1965-73 proved to be the most controversial episode in American history since the Civil War and has spawned a massive literature. Scholars have fiercely debated how and why the US became involved in Vietnam while American policy-makers have in lengthy memoirs generally defended their decision to intervene and their conduct of the war. Senior military commanders have for the most part sought to blame either the civilian leadership (for its adherence to a limited war doctrine which supposedly made the proper application of US military power impossible), or else a disloyal media (who supposedly misreported the war and undermined domestic political support) for America's humiliating defeat. All of this writing assumes a strategic level of analysis. Many of the junior officers and men and a few nurses who served in Vietnam, meanwhile, have movingly recounted their experiences in highly articulate and perceptive personal memoirs or (frequently semi-autobiographical) novels.

Approximately 3 million American, military personnel served between 1964-73 in the Vietnam theatre (that is, Vietnam, Laos, Cambodia, Thailand and the Tonkin Gulf area), the vast majority of whom, however, have not had the inclination (or perhaps, in some instances, the confidence of education) to write about their experiences. Oral history has a much greater number of these men and women, officers, GI's and nurses, who have not written in their own right the opportunity not only to tell but to publish for the record their various stories. In the last 15 years there have appeared a score of collections of such oral testimony, many of which are available in the UK. This article reviews some of the best work and aims to assess its usefulness to the historian trying to understand the tragedy that was Vietnam.

What is Oral History?

Oral history, to put it most simply, is 'history by word of mouth', though it is distinct from 'oral tradition', the practice in some tribal societies of members passing down their history in the form of a story. Oral history, the interviewing of people to recount their experiences in the past, has developed in recent years in two main forms. First the use of the interview as an adjunct to historical enquiry from literate sources, and second, the presentation of oral accounts in their own right. Dedicated journals which explore and promote the various applications of oral evidence have been founded in Britain, Oral History, and in the United States, Oral History Review.

Diplomatic, political and military historians have frequently used the interview to flesh out areas in which written records are sparse. Political biographers have often found interviewing contemporaries, colleagues and confidantes of major leaders invaluable in throwing light on particular aspects of their subject's personality and thought-processes, in exactly the same way as television producers have long used such 'talking heads' to add colour and authority to documentaries. This level of analysis has been dubbed 'elite oral history'. Social historians have often been more interested in interviewing those further down the social scale such as coal-miners, steel-workers, chamber-maids, and factory girls, in order to flesh out our picture of conditions for the masses in a particular area at a particular time.

The presentation of oral testimony in its own right has burgeoned in the last ten years. Collections of oral testimony, with their often moving sense of 'I was there' immediacy, sell very well, and are often bought by people who seldom read other types of history books. There are now oral histories of the First World War, the Great Depression, the Third Reich, World War II, the Korean and Falklands Wars, as well as those on Vietnam.

Though oral evidence can be an invaluable tool to the historian, it cannot be used uncritically, and there are two main areas in which problems may arise.

Most of the work or oral history and Vietnam has reached the book-shelves in the form of the second category: collections of oral testimony. There are compilations which include extensive 'elite oral history' interviews, but as earlier indicated, the analysis here is largely concerned with those involved at lower levels. Journalist Mark Baker's Nam and combat-veteran turned writer Al Santolis Everything We Had, both published in 1981, were among the first in this genre.

Baker's veterans, as in all the compilations, are allowed to speak verbatim, expletives and all. The accounts are (unusually) all anonymous, however and given the degree of confession to insubordination, mutiny and atrocity it is not difficult to see why. The selections are grouped thematically and merely separated by asterisks. As one commentator has noted, 'An extraordinary effect of reading results from these different "voices" drifting into a single narrational voice'. The accounts are almost unrelievedly negative, cynical or embittered. The contributors are almost all enlisted men who served in the ground forces (with very few in the Navy or Air Force), with a smattering of junior officers and nurses. What emerges is a horrifying kaleidoscopic picture a la Apocalypse Now, of the chaos, anarchy, even madness of a war the wherefores of which few understood in a country all found profoundly alien, a war which, degraded or destroyed everyone who came into contact with it. (Source 1)

While Nam gives us a profoundly negative and predominantly 'grunts'-eye view' of the war, the contributors to Everything We Had are generally up-beat about their experiences. The 33 contributors (all listed, with details of name, rank, unit, location and dates of service) also represent a broader sweep of US military personnel who served in Vietnam. Everything We Had is thus the story of specific people in specific places, rather than a kaleidoscope of particularly vivid and harrowing images meshed together into a whole by an editor, as is the case with Nam. (Source 2)

Washington Post reporter Myra MacPherson 's Long Time Passing (1984) sets out to chronicle 'the Vietnam generation' and the range of subjects is thus wider still: deserters, draft-dodgers, antiwar activists and relatives (particularly parents) of servicemen and women who died in the war as well as a wide variety of veterans. MacPherson seldom reproduces large chunks of first-person narrative (as Baker and Santoli do) but rather weaves the contents of over 500 interviews, quoting and observing frequently, into an epic, fascinating and heartwrenching story of the impact the war had on America as a whole, and not just those who fought it. (Source 3)

Wallace Terry’s Bloods (1984) is a dedicatee oral history of black veterans by a black journalist who visited Vietnam during the war. In World War II black troops were not thought fit to serve in the line with their white comrades; in Vietnam blacks (and hispanics), invariably poor and thus less able to obtain deferments than white, middle-class college boys, were substantially over-represented in the lower ranks in the field. Relatively few were officers or pilots, fewer still commanders. As Vietcong propaganda was wont to point out, blacks were fighting for rights in Vietnam which they did not enjoy at home, particularly in the South. The twenty accounts in Bloods are harrowing and tragic, replete with atrocity, and show me ordinary black soldier frequently facing harassment and abuse from white comrades and superiors, as well as attacks from the Vietnamese enemy. (Sources 4 and 5)

Santoli's later compilation, To Bear Any Burden, a title which incorporates John F Kennedy's Inaugural Address aoi lonition to his countrymen for a new world, is notable in that he bothers to consult the Vietnamese (mainly Southern including some recanted Vietcong, now living in the West) about the conflict which devastated their country, and aims to trace the story back to 1954 and the Geneva Accords, rather than just to 1965, when Johnson massively escalated the US commitment. To Bear Any Burden is an explicitly revisionist account designed to reaffirm the righteousness of the cause and to suggest how it could have been won. Santoli's 48 interviewees, who include officials of civilian bodies such as me Agency for International Development and prominent interpreters of the war as well as soldiers, commanders and selected Vietnamese, were chosen with this larger goal in mind. (Sources 6,7, and 8)

There have been several oral histories of nurses who served in Vietnam published in the last ten years, and all make compelling reading. These books reflect a concern at the relatively slight interest accorded nurses who served in the war and the trauma they experienced. Notionally 'non-combatants', eight nurses were killed, scores injured by the effects of hostile fire and most, having experienced at first hand the bloody results of combat, suffered Post Traumatic Stress Disorder (PTSD), the classic psychological disfunction associated with combat veterans. (Source 9)

Some of the most outstanding writing on the Vietnam War has been by journalists, many of whom, covered the war, and so it is with oral history: none of the books under review here is by a professional historian.

Nearly all of the gathering of oral testimony on Vietnam has been done by Americans, and. most of it on Americans (with relatively little canvassing of Vietnamese, especially civilians), and as such has remained ethnocentrically preoccupied with Vietnam as an American tragedy, rather than one for Vietnam. As one analyst has acidly observed, 'Vietnam' is no longer for Americans a country with distinct geographical features and people, rather: 'Vietnam is [now] our word, meaning an American failure, a shorthand for a disaster, a tragedy of good intentions, a well-meaning misuse of American power, a noble cause ruined by a loss of will and no home front, a loathsome jungle where our army of children fought an army of fanatics'.

Only MacPherson aims to locate the Vietnam experience in the wider context of American history, and Santoli's Vietnamese, as has been noted, were carefully selected with an ulterior motive in mind, though it is true that the nature of the political regime in Vietnam precluded a wider survey. Baker and Terry's veterans are mainly from the lower ranks of the US military and thus provide a predominantly 'grunts'-eye' view of the war. The other accounts provide a much greater range of experience and begin to illuminate something of the multidimensional nature of the conflict. Baker and Terry's approach nonetheless gives the inarticulate, the uneducated, the illiterate and the obscure an opportunity to have their accounts publicised in a way that they could not be without oral history. The oral accounts taken together, though they cannot, of course, illuminate questions of grand strategy or explain why the US became involved In Vietnam, and are not without some of the problems earlier identified, are nonetheless indispensable to our understanding of what the Vietnam War was and what it did to those, whether there or not, who lived through it.

Peter Riddick has taught History and Politics at Berkhamsted School. This article is a much abridged version of an article published under the same title in the April 1995 issue of Archives (The Journal of the British Records Association), XXII, No. 93, pp60-76, and appears by permission.