Roger Hudson reflects on a photograph of Blondin, the tightrope walker whose crossings of Niagara Falls became ever more bizarre. 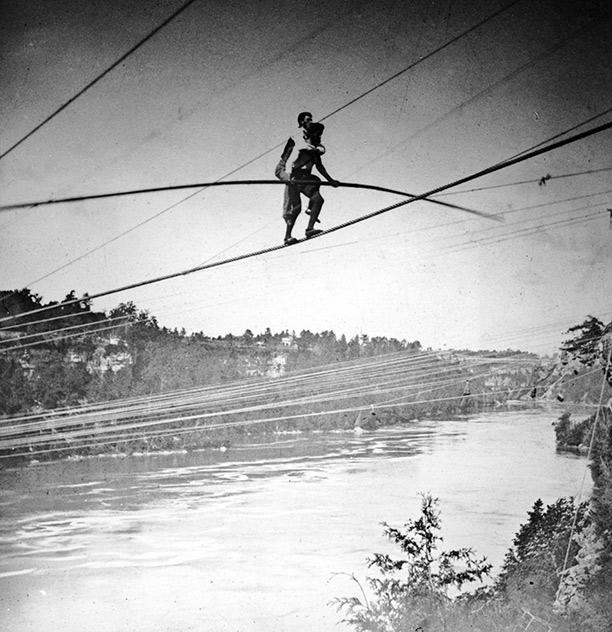 The famous Blondin made his first crossing of Niagara Falls on June 30th, 1859, watched, it was calculated, by 100,000 people. It is now August and he is introducing variations into his act: wearing a blindfold, pushing a wheelbarrow, on stilts, sitting down midway then cooking and eating an omelette. Here his manager Harry Colcord is carried piggy-back, exhorted beforehand by Blondin:

Look up, Harry … You are no longer Colcord you are Blondin … be a part of me, mind, body and soul. If I sway, sway with me. Do not attempt to do any balancing yourself. If you do we will both go to our death.

They will make the journey several times that summer. The 35-year-old Frenchman Jean-François Gravelet, ‘Blondin’, used a manila hemp rope three inches in diameter, strung 160 feet above the water, linking New York State with Ontario, Canada, a little below the Falls, a skein of telegraph wires in the background. His balancing pole was 30 feet long and weighed 40 pounds – how much his unfortunate manager weighed is not recorded. His career went from strength to strength after this and at its height he was said to be earning $500,000 a year from his performances in many countries. He was reckoned to have crossed Niagara 300 times by his death, in bed in Ealing in 1897, and to have walked 10,000 miles on his various ropes.

This is one of the images taken by William England for the London Stereoscopic Company on his visit to the USA and Canada, like that of Washington’s Mausoleum reproduced in inFocus last February. He used twinned cameras to take almost identical pictures of the same scene which, when viewed in a stereoscope, produced a 3D effect. Those he took of Blondin were by far the most commercially successful, selling in tens of thousands. The only comparable earlier pictorial exploitation of a sensational event was during the ballooning craze of the 1780s in England and France, when countless prints of the first flights by humans were produced. The pictures England took on the same trip of railways, docks, bridges and cities were rather more important since they enabled the Old World to see for the first time how the New could match it blow for blow.

England was only one of a number of British photographers who were showing what could be done with the new medium in the 1850s. Moving round with their own mobile horse-drawn darkrooms, where the glass plates could be prepared and then developed after being exposed, they got photography firmly out of the studio. Roger Fenton thus began war photography with his coverage of the British, French and Turkish forces in the Crimea in 1855, while Francis Frith, later the pioneer of the picture postcard, enabled his country-men to get an idea of Ancient Egypt, the Nile and the Holy Land for the first time via his photographs, which were published in a 25-part work between 1858 and 1860.