It took an Irish Gothic novelist to tie up centuries of demonic mythology surrounding this leathery, nocturnal mammal. 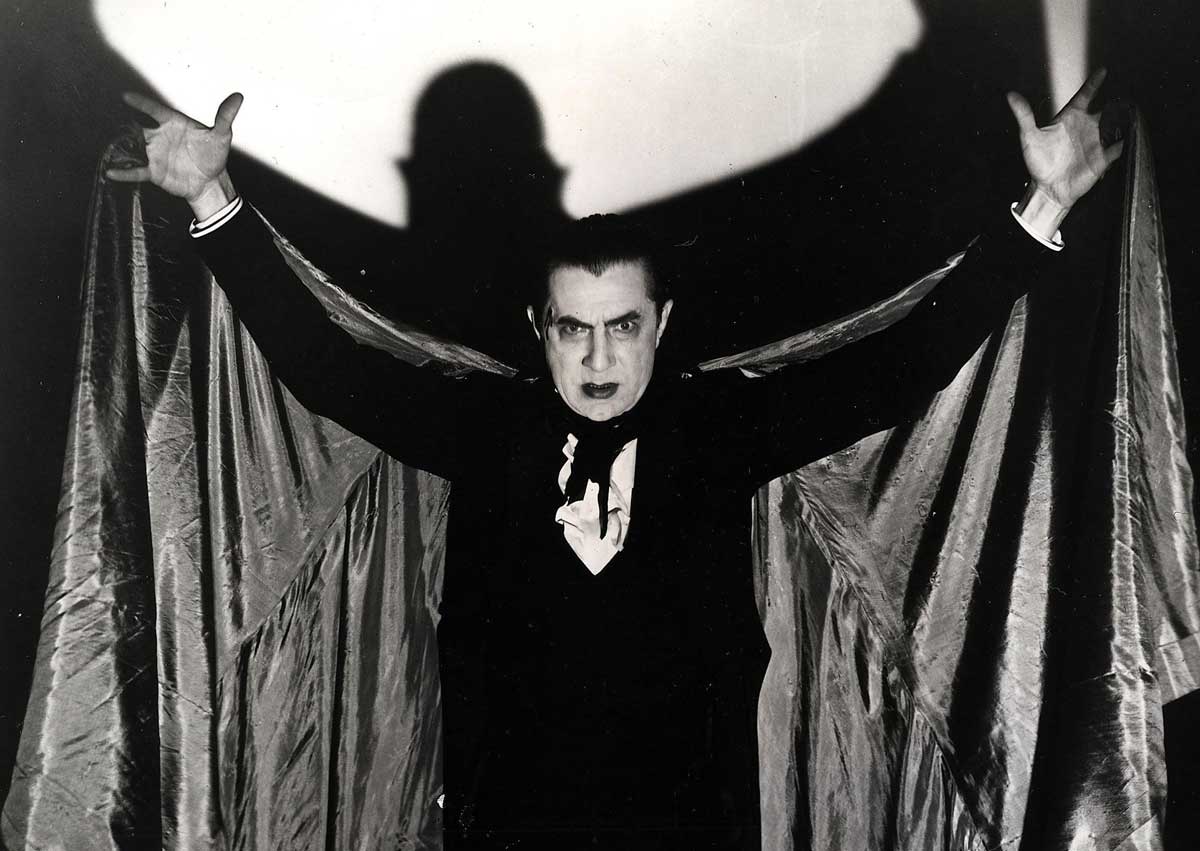 What would vampires be without bats? In Bram Stoker’s Dracula (1897), locus classicus of the modern vampire, the two were inextricably linked. With his ‘sharp, white teeth’, pointed ears, ‘highly-arched nostrils’ and cloak ‘spreading out around him like great wings’, the Count looked nothing if not bat-like. He could even transform himself into one, ‘buffeting its wings’ against Lucy Westenra’s window, looming over Renfield’s cell and stalking his pursuers as they plot his demise. And it is as a gigantic, blood-crazed bat that Dr Van Helsing most vividly describes him.

Since the publication of Stoker’s novel, the connection has only become stronger. Thanks to film adaptations starring Bela Lugosi (1931), Christopher Lee (1958) and Gary Oldman (1992) among others, the image of the vampire as a ‘bat-man’ has been so firmly fixed in the popular imagination that, despite some recent attempts to ‘humanise’ the monster (e.g. Buffy the Vampire Slayer and the Twilight series), the two are now virtually synonymous.

But where did this come from? How did the vampire get his (or her) bat?

Bats have long evoked negative reactions among Europeans. Although the varieties of vespertilionidae indigenous to the continent are generally quite small and feed predominantly on insects, their nocturnal habits, snub noses and leathery wings have earned them a reputation for wickedness and devilry since the earliest times.

At first, this was expressed only in passing. In Homer’s Odyssey, for example, the souls of the suitors summoned by Hermes squeak ‘like bats’, while in Aristophanes’ Birds, the chorus relates that, when Pisander sacrificed a camel to his own soul, ‘that bat of a Caereophon came up from hell to drink’ its blood. So, too, in the Old Testament, bats are identified as ritually unclean (Leviticus 11:19; Deuteronomy 14:18) and as the future recipients of ‘gold and silver idols’ when the Lord ‘rises to shake the earth’ (Isaiah 2:20).

With the coming of Christianity, the connection was made more explicit. Attention initially focused on the supposed physiological resemblance between bats and demons. In his Apologeticus, Tertullian asserted that all spirits had wings and that this was a property of both angels and demons. Developing this further in the mid-fourth century, Basil of Caesarea argued that demons, like bats, ‘fly through the air’ not with feathers, ‘but by means of a fleshy membrane’. Later, however, bats were also endowed with a wider, moral signification. Since it was thought that bats could not see in daylight, the 13th-century Bestiario moralizzato di Gubbio suggested that it was ‘an emblem of those lost in the darkness of sin, who refuse to show themselves to those who could take care of their souls’.

By the dawn of the 14th century, such associations had become a commonplace of European art and literature. In the Commedia, for example, Dante described Satan as having six great wings, each ‘like a bat’s’, but bigger than the sails of any ship. Similarly, in Duccio’s Temptation of Christ on the Mount (1308-11), the Devil is given a coat of thick, black fur, membranous wings, pointed ears, a snub nose and hooked heels; and in Buonamico Buffalmacco’s Pisan fresco of the Triumph of Death (1336-41), the demons swooping down to carry souls off to Hell all have superbly leathery pinions. Later, the Aurora consurgens, a 15th-century alchemical treatise, included a depiction of a hermaphrodite, in which the female ‘half’ is shown gripping a bat; and a German woodcut from c.1490 (often known as the ‘Frau Welt’ broadside) used a pair of enormous bat wings to allegorise either the desire for fame, or the sin of envy.

Vampires were another thing entirely, though. When they entered the popular imagination in the early 18th century, descriptions were often confused; but most accounts had little doubt about what the vampire’s essential attributes were. According to Don Antoine Calmet, the author of the bestselling Traité sur les apparitions des esprits et sur les vampires … (1751), vampires were ‘revenant corpses’, that is, people who were dead, but who had somehow come back to life to torment others. Rampaging through the countryside of Hungary, Serbia and Moravia, they lived off blood, which they sucked from humans or animals; they could turn other people into their own kind, even indirectly; and they could only be killed by having their heads cut off, their hearts torn out, or their bodies burnt to a cinder. Yet, while Calmet noted that the word oupire or vampire meant ‘leech’, he saw no reason to associate them with animals of any kind, least of all bats.

This was common sense, though. No matter how nasty vampires may have been, Calmet had to acknowledge that they were human beings, rather than demons. They were not victims of a ‘curse’; they did not transform themselves into anything else; and they had no attributes – beyond an unspecified sucking – which pointed to an affinity with any non-human creatures. Nor were they particularly sinful. Indeed, given that Calmet suspected ‘vampirism’ was really just a way of describing the results of acute malnourishment, he came close to portraying ‘vampires’ merely as the victims of socio-economic deprivation. As such, it would have been downright unfair, not to say inaccurate, to have linked them with an animal which had such a hellish reputation.

Shortly after the publication of Calmet’s Traité, however, things began to change. Back in the early 16th century, news had reached Europe of hitherto unknown species of bat, living in the caves and forests of South America and the Far East. Though reports were sketchy at first, all agreed that they sucked blood. As we now know, these are generally quite small creatures, which rarely approach humans, except when driven by extreme hunger but, in the imagination of the conquistadors, they were transformed into gigantic creatures, praying on men at every turn. In 1511, Pietro Martire d’Angiera described seeing ‘bats as large as pigeons’, swooping down on the camp and biting soldiers as they slept. Needless to say, such vivid testimony was eagerly repeated by naturalists. Writing 80 years later, Ulisse Aldovrandi gleefully reported that, in the Indies, there were bats the size of doves which attacked people without mercy. In the decades that followed, the image of huge, flying beasts, hungry for human blood, became an accepted zoological truth.

With the dawning of the ‘vampire craze’, this picture was overlaid with a new element. Struck by the similarity between the preferred diet of vampires and that of the newly discovered bats, the Dutch taxonomist Carl Linnaeus could not resist dubbing one of the newly discovered species a ‘vampire bat’. As it happened, the species he chose – the Malasyian flying fox (Pteropus vampyrus) – is a fruit bat, rather than a blood-sucker; but, like his predecessors, he assumed that, since it was unusually large, it was just the sort of animal to tackle a fully grown man and drain his veins dry. Others soon followed suit, adding variations of their own. Developing the association between size and bloodthirstiness further, Thomas Pennant argued that the vampire bat used its enormous wings to fan its victims to sleep, so that it could drill its sharpened tongue into their veins without them noticing; while, in 1796, John Stedman maintained that, in Guiana, it had a wingspan of up to a metre and gorged itself until it could no longer fly – or its victim died.

As vampire bats were growing in stature, bats also lost some of their earlier associations. Though they continued to be linked with wickedness, the steady march of science had begun to loosen some of the iconographical ties by which they had previously been constrained. No longer confined to demons and sin alone, they now came to be linked with all manner of evil spirits and malign influences. Perhaps the clearest example is Francisco Goya’s The Sleep of Reason Produces Monsters (c.1799). This shows a man – possibly Goya himself – asleep at a table, assailed by a host of nocturnal animals, including owls and bats, sometimes said to symbolise folly and ignorance, but more likely representing irrational fantasy or madness.

Curiously, neither of these two developments had much impact on how vampires themselves were seen. Although there was an explosion of vampire literature in the early 19th century, the persistent ‘humanity’ of vampirism, coupled with the limited purchase of the relevant scientific literature, seems to have prevented vampires from being portrayed as ‘bat-creatures’, or endowed with bat-like characteristics. Some works of the period, such as John Polidori’s novel The Vampyre (1819), were consciously conservative, deviating little from earlier tales. Others, such as Samuel Taylor Coleridge’s Christabel (1797-1800) and Robert Southey’s Thalaba the Destroyer (1801), were more imaginative, portraying vampires as women and seizing on the latent eroticism of blood-sucking to explore ‘forbidden’ or ‘defective’ desires. But with the exception of A[rthur] Y[oung]’s short story ‘Pepopukin in Corsica’ (1826), which depicts a vampire rising from the grave and flying over the Alps, none displayed much interest in forging a connection with animals in general, or bats in particular.

The publication of Charles Darwin’s account of his journey aboard HMS Beagle in 1839 marked a turning point. Though this book was notable primarily for Darwin’s first engagement with the question of natural selection, it also described the first direct observation of a true vampire bat (Desmodus rotundus) feeding on blood. It caused an instant sensation. The effect on vampire literature was huge. As the second edition of Darwin’s work was being rushed out, vampires were made to look and behave like bats for the first time. In the penny dreadful Varney the Vampire (1845-7), the protagonist is given ‘glaringly white … fang-like teeth’, with which he bites the necks of his victims; and, on the cover of the collected edition, he is even shown wearing a bat-like cloak. The idea was quick to catch on. Though bats were not always named, vampires appeared with sharpened teeth and/or capes in Alexandre Dumas père’s play Le Vampire (1851) and Joseph Sheridan’s Carmilla (1872), among others.

The detail in the devil

It was one thing for a vampire to look like a bat; it was quite another to be a bat. Given that vampires had always been regarded as essentially human, this posed something of a problem. If a vampire was to be more than just a simulacrum, he (or she) would have to become a shape-shifter; in that case, a whole new backstory would be needed. Vague ideas about malnutrition or being bitten by another vampire no longer cut the mustard.

A variety of solutions were put forward. In ‘Margery of Quether’ (1884), for example, Sabine Baring-Gould narrated the story of an old woman who sat in a church, praying for eternal life for so long that she eventually metamorphosed into a vampire bat and lived in the belfry. More compelling were those which pointed to a more supernatural origin. In The Vampire (1863), William Kingston describes a group of women who become sex-crazed witches at night, capable of transforming themselves into owls, ducks, or bats. But even these left questions hanging.

It fell to Bram Stoker to fill in the gaps. Drawing on a range of folkloric sources – including Emily Gerard’s essay on ‘Transylvania Superstitions’ (1885) – Stoker suggested that, while Dracula had once been a mighty warrior, he owed his vampiric immortality either to his mastery of black magic (which he had studied at Scholomance) or to some unspecified arrangement with the powers of darkness. In either case, Stoker gave the impression that his vampirism was demonic, underscored by the fact that ‘Dracula’ means ‘the devil’ in Old Romanian. It is this which allowed him to bend the laws of nature and transform into a bat. The detail, it seems, was in the devil, all along.