A Nationalism Born of the Great War

The 1914-18 conflict changed the nature of Scottish identity. 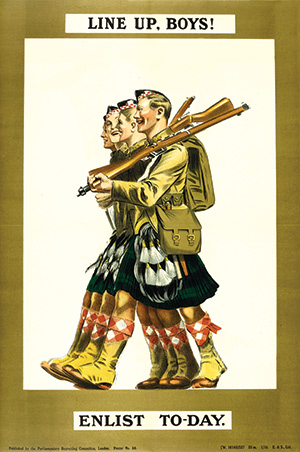 It is well-known that the First World War stimulated nationalism in Australia and India during the 1920s, but its impact on the Scots is less recognised, especially south of the border. In 1914 the Union with England was secure and most Scots regarded their nationalism and distinctive culture as compatible with Britishness. However the stability of the Union was conditional on material advantage. Moreover, several decades of pressure for Home Rule in Ireland had led many Scots to seek their own parliament within the framework of the Union. In 1913 a majority of MPs voted for a Scots Home Rule bill. However, the political disruption caused by the Great War checked this development, largely because it led to the decline of the Liberals, who had dominated Scots politics and were pro-devolution. Between the wars Scotland was increasingly represented by the Labour and Conservative parties, who were less interested in constitutional reform and hostile to any challenge to the Union.

Yet the First World War had a radicalising impact on Scottish society. The mortality rate for the British Army was 12 per cent, but for Scottish troops a horrendous 26 per cent. As a result Scots commemorated their losses in a more sombre fashion than the English, culminating in the erection in 1924-27 of a significantly titled National War Memorial, designed by Sir Robert Lorimer, at Edinburgh Castle, which soon became a place of pilgrimage. The memorial symbolised not just war deaths but the loss of the imperial greatness that had underpinned the Union with England. In 1919, fearful that the end of the war signalled the disappearance of their economic gains, Scottish workers organised a 40-hour strike to oppose the abolition of rent restrictions and wage controls. The mass demonstrations in Glasgow that followed were denounced as a ‘Bolshevist uprising’ in Westminster; the installation of 12,000 troops, six tanks and hotel-top machine-gun nests made Scotland seem like a country under foreign occupation.

The strikers were basically correct. By 1920 their economy, based on shipbuilding, textiles, steel and heavy engineering, collapsed. For the rest of the century unemployment remained much higher in Scotland than south of the border, recovery from depression was much slower and manufacturers began to relocate, closing their offices in Scotland, which gradually became a colonial economy. As a result emigration remained high, reaching around 400,000 in the 1920s. This in turn undermined Scottish self-esteem and fostered anti-English opinion.

One symptom of the mood was an attempt to revive national sentiment through a literary renaissance, led by the poet Hugh MacDiarmid and others, who denounced the Scottish political elite as ‘toadies and lickspittles of the English ascendancy’. However, the literary revival made nationalism seem more marginal and its immediate effects were slight. In 1928 a left-wing National Party of Scotland was formed, followed in 1932 by a right-wing Scottish Party, the two amalgamating in 1935 to become the Scottish National Party of today. As the party enjoyed little electoral success before 1939, it proved easy to ignore the gradual, long-term unravelling of the economic-imperial basis of the Union that followed the Great War. Yet this was the process that created the seedbed from which an effective modern national movement eventually emerged, leading to the referendum of 2014.