In 1820 the discovery of an ancient Greek statue with missing arms posed more questions than answers.

On 8 April 1820 Olivier Voutier was digging on the Greek island of Milos (or Melos) when he spotted something extraordinary. A 23-year-old ensign in the French navy, he had a passion for archaeology and had come ashore that morning to explore the ruins of a theatre. He had already made a few interesting finds, but just then something made him look up. A farmer named Yorgos Kentrotas had been prising stones out of a nearby wall. Having stopped suddenly, he was now staring intently into an ancient niche he had uncovered. Strolling over to where the farmer was standing, Voutier was amazed to see a statue sticking out of the earth. He persuaded the farmer to dig it out and soon found himself standing before a marble torso. Some of its hair was missing, there was a big gap in the side and there were scratches and bumps all over. Even so, he could see that it was exceptional.

Voutier and Kentrotas soon uncovered the bottom half, buried beneath the niche, together with the missing chunk from the side. With some difficulty, they put the three pieces together and stood back to admire their find. The statue was of a woman, nude from the waist up, with loose drapery covering her legs. She was turning slightly to the left, with her head held to one side and a yearning look in her eyes. But where were her arms? Although some later authors claimed that the statue had been found with one still attached, a sketch Voutier drew that afternoon shows that both were missing. When Kentrotas scouted around a bit more, he turned up two herms (square pillars with carved heads on top), a bit of arm and a hand holding an apple. But there was still no clue as to how these fragments fitted onto the statue – and no trace of the other arm.

The crisis of archaeology

How the Venus de Milo ended up in France is unclear. Some accounts claim that it was dragged away by French sailors after a fight with Turkish marines on the beach. Others say that Kentrotas and the island authorities were simply strong-armed into selling.

Either way, the statue caused a sensation when it arrived in Paris. Yet no sooner had it been delivered to the Louvre than the difficulties began. In the early 19th century it was customary to ‘restore’ statues before exhibiting them. To do this, you had to have some idea of what they originally looked like. But in this case, it was easier said than done. If the Louvre’s experts were to stand any chance of establishing what the missing arms had been doing, they first had to decide who the statue was of, when it was carved and whether it had been remodelled in antiquity.

Unfortunately for them there were no straightforward answers. Voutier had assumed that the statue was of Venus and that the fruit in her hand was the apple of discord. But not everyone agreed. Some, suspecting that the hand came from another work, thought that it was a statue of Victory; others, the nymph Melos. It was the same story when it came to dating the discovery. Most were convinced that it belonged to the classical period of Greek art (c.450-333 BC). One scholar even attributed it to Phidias himself. But again, there were doubts. On the journey from Melos to Paris, the statue had been badly damaged. Three more large pieces had broken off the hips. The Louvre’s restorers gamely stuck them back together with plaster and a few bits of wood – not noticing that the statue now looked a little different. To make matters worse, the base of one of the herms had also been detached. Remarkably, this fragment seemed to fit neatly into the gap at the base of the statue, giving the impression that it had formed part of the same work. What made this so significant was an inscription indicating that it had been carved by ‘[Alex]andros son of Menides citizen of Antioch’. Since Antioch had only been founded in around 300 BC, this suggested that the statue belonged not to the classical period, but to the Hellenistic (c.333-30 BC), the art of which was then regarded as inferior.

The confusion exposed a weakness at the heart of archaeology. Still in its infancy, it lacked a critical methodology. Though most scholars were formidably learned, all they had to go on when piecing fragmentary works together were their own preconceptions of what ancient Greek art ‘should’ have been like – meaning that their ‘reconstructions’ were little better than guesswork.

The most striking example came from Antoine-Chrysostome Quatremère de Quincy. Convinced that the statue was of Venus, he speculated that she had originally appeared alongside the god Mars and that her arms had been reaching out, as if to stop him from leaving. These, he argued, had been broken off when the two were separated sometime afterwards. The hand holding the apple, the arm fragment and the inscribed base must have been later Hellenistic additions which could safely be dismissed.

There was no real evidence for most of this. It was a hunch, and a rather bizarre one at that. But that was how archaeology worked and no one saw any reason to disagree.

A revolution in archaeological thinking was not long in coming. The unexpected hero behind it was Jean-Gaspard-Félix Ravaisson. A dreamy, otherworldly scholar, he was quite spectacularly boring. Whenever he gave a lecture, his audiences would fall asleep or leave within minutes. He might never have had any impact on archaeology – or the mystery of the Venus de Milo’s arms – but for a fortuitous accident.

In June 1870 Ravaisson was appointed as the Louvre’s new conservator of antiquities, just weeks before the Franco-Prussian War broke out. Fearing that the advancing Prussians might plunder the museum, he had the Venus de Milo packed in crates and hidden in the basement of a nearby police building. When it was eventually returned to the Louvre after the war had ended, however, it was found that the plaster holding the statue together had broken apart in the damp air. This gave Ravaisson a unique opportunity to examine the Venus from inside, upon which he realised what a mess the earlier restorers had made. The two main parts had been pieced together in such a way that the torso leaned unnaturally to the right. Worse, to hide the mysterious disappearance of the inscribed base, the whole thing had been set on a new plinth, which made it list even more. This gave a misleading impression both of the statue’s posture and the position of its arms.

Once Ravaisson had restored the statue’s correct posture, he could begin thinking about where the missing limbs really went. But, like Quatremère de Quincy, he was convinced that the Venus had been one of a pair. Without a shred of evidence, he went on to identify the ‘missing’ figure with another statue in the Louvre’s collection known as the Borghese Mars – which he later came to believe was actually a statue of Theseus. He made sculptures of his own to show how they might have fitted together. In the most satisfying of these, Venus is half-turned towards Theseus. Her left hand, holding the apple, rests on his right shoulder; with the right, she reaches out to touch his chest.

This marked a turning point. For all his flights of fancy, Ravaisson had still been dimly aware that, if archaeologists were to unravel the mystery of the Venus de Milo’s arms, they needed to begin by looking at the statue itself. This was a crucial insight. From that point on, archaeology would be dominated by a new and more self-consciously ‘scientific’ approach and evidence, rather than gut feeling, would be king.

But there was still a problem. Given that the remains of the ancient past were often fragmentary and confusing, how should one go about filling in the gaps in pieces like the Venus de Milo? Should you try to weld all the available evidence into a single, coherent picture? Or should you be more selective?

Two figures towered above this debate: Adolf Furtwängler and Salomon Reinach. Furtwängler was the embodiment of the ‘holistic’ approach. Blessed with a formidable memory, he was brilliant at finding patterns amid chaos. He had built his career on cataloguing the pottery found at Mycenae by Heinrich Schliemann. By sorting through thousands of fragments slowly and methodically he had been able to discern subtle shifts in shape and ornamentation – and eventually assembled a complete chronology for the evolution of Mycenaean pottery. This technique he later applied to art. In Meisterwerke der griechischen Plastik (1893), he was able not only to identify lost masterpieces of Greek sculpture from later Roman copies, but also to draw up a timeline of the contributions made by individual artists.

This inspired his approach to the Venus de Milo’s arms. Comprehensive as ever, Furtwängler refused to dismiss anything found with the statue. He accepted that the left hand held an apple, that the statue stood alone and that the inscribed base (which had somehow gone missing) belonged with it. As such, he recognised the Venus as a Hellenistic work and suggested that it had originally stood next to a square pillar. The left hand was resting on top, palm upwards, while the right hand reached gracefully round towards the left thigh.

Reinach thought otherwise. Granted, he wasn’t above making a few mistakes now and then. But he had a sharp analytical eye and was excellent at sifting through layers of evidence. This was never truer than with the Venus de Milo. He came to believe that Furtwängler’s holistic approach was simply too uncritical. It was like trying to do a puzzle with too many pieces: although, with a little effort, you might be able to make them all fit together, you needed the right ones to get the real picture.

Reinach was convinced the missing inscribed base could not belong with the statue. At first, he was just going on Voutier’s account of the discovery; but when the base turned up in a corner of the Louvre and fitted perfectly with the herm, it was clear that he was right. As for the date, he was unsure. With the evidence for a Hellenistic dating now ruled out, he was tempted to ascribe it to the classical period – but after comparing it with others which had recently been turned up on Melos, he was less sure. Yet his most dazzling insight concerned the arms. Rather than proposing a speculative reconstruction, or claiming to have all the answers, he frankly admitted that – given the paucity of evidence – they were a mystery.

Many of Reinach’s ideas were wide of the mark, but this last one was spot on. Unlike those before him, he accepted that, insofar as the Venus de Milo’s appearance was concerned, uncertainty was the only legitimate conclusion. This marked archaeology’s coming of age. It illustrated that what distinguishes scholarship from guesswork or holistic cataloguing is the recognition that evidence has limits – and that, sometimes, puzzles cannot adequately be solved.

Barring any new discoveries, we may never know what the Venus de Milo really looked like. And perhaps that isn’t a bad thing. Far from being discouraging, its incompleteness only adds to its mystery and its appeal. It forces the viewer not only to imagine what might have been, but also to interrogate how we approach the ancient past. Armless fun, you might say. 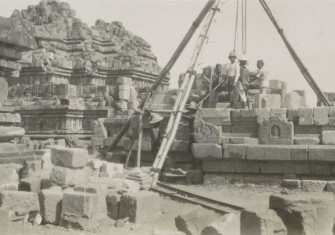 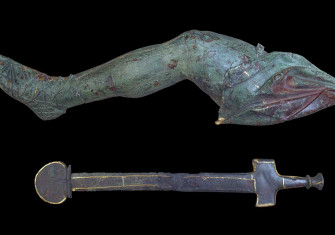