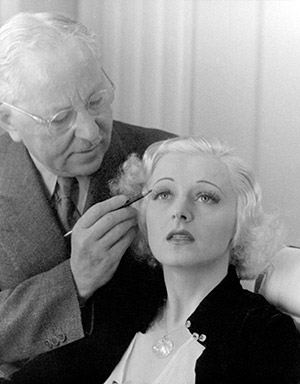 The kingpin of the modern cosmetics industry, sometimes credited with coining the term ‘make-up’, made his name and fortune in Hollywood. He began life in unglamorous circumstances in Russian-ruled Poland, where he was born in Lodz at some time in the 1870s, one of many children of a humble Jewish family. He was apprenticed to a cosmetician and wigmaker, delighted in the work and, after serving his four years compulsory service as a conscript in the Russian army, in 1894 took himself to Moscow and opened a shop where he made and sold cosmetics, perfumes and wigs. He soon acquired aristocratic clients and the Russian Grand Opera made him its cosmetician. Although he was now making good money, Factor felt hemmed in by the prevailing antisemitism and unable to make full use of his abilities. In 1904 he and his wife and children sneaked away on a ship to New York and quickly moved on to St Louis.

Things did not go well at first and Factor spent a few years running a barber’s shop, but in 1908, hearing about the motion picture business that had begun to develop in Los Angeles, he sensed an opportunity, moved there and opened a small shop. The type of cosmetics and wigs used in the theatre, where the audience saw the performers at a distance, were completely unsuitable for the eye of the movie camera. Factor devised products that worked far better and the film companies welcomed them. Filmstars from Mary Pickford to Jean Harlow and Joan Crawford took to using them off screen as well as on. In the 1920s Factor began an advertising campaign that claimed that every woman could look like a movie star by using his make-up. It worked and in 1928 he opened a Los Angeles factory employing 250 people. When he died at his home in Beverly Hills ten years later, Max Factor was one of the best-known names in the United States.