A Matter of Judgement

An inherent tension between the past and the present becomes explicit when we make our assessments of historical figures, argues Suzannah Lipscomb. 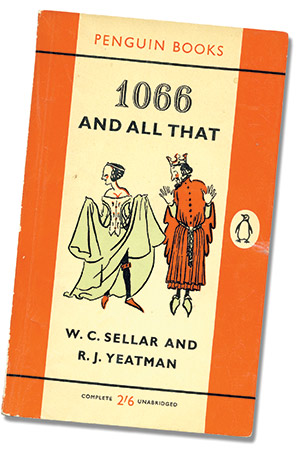 Were the lampooning authors of 1066 and All That actually onto something with their list of ‘103 Good Things and 5 Bad Kings’? Is it ultimately the business of a historian to be umpire, referee and magistrate?

Traditional undergraduate historiography would demur. The medievalist David Knowles argues: ‘The historian is not a judge, still less a hanging judge.’ E.H. Carr thought the historian ought to approach his subjects rather like French newspapers approach their politicians: ‘History does not turn aside to pronounce moral judgements on the private lives of individuals who appear in his pages … [the historian] has other things to do.’ Carr concluded therefore: ‘Henry VIII may have been a bad husband and a good king. But the historian is interested in him in the former capacity only insofar as it affected historical events …’ Even so, few today would contend that Henry VIII’s colourful marital life does not constitute a series of ‘historical events’.

Perhaps the best and most evocative warning against making pronouncements on the past came from R.G. Collingwood:

To pass moral judgements on the past is to fall into the fallacy of imagining that somewhere, behind the veil, the past is still happening ... as if [it is] now being enacted in the next room and we ought to break open the door and stop it. These things have been; they are over; there is nothing to be done about them.

Moral judgements by historians risk the application to the past of present- day standards – or prejudices – when the chief duty of a historian is to approach the past on its own terms. Yet I would venture that judging the past is one of the primary ways that the public engages with history and that it can even have serious historical merit, if the judgement is framed within the principles of its age.

Take Carr’s study of Henry VIII. Historians have tussled over the question of whether Henry was a tyrant. Geoffrey Elton always argued that Henry was not, because he acted within the confines of the law, in contrast to the Oxford English Dictionary’s first definition of a ‘tyrant’: ‘One who seizes upon the sovereign power in a state without legal right; an absolute ruler; a usurper.’ This is reflected in a 16th-century definition. In 1583 Sir Thomas Smith stated that ‘a tyrant they name him, who by force comes to the monarch against the will of the people, breaks laws already made at his pleasure … [and] makes other without the advice of his people’. Henry VIII did none of these things. He made laws with the consent of his people in Parliament and abided by them.

Yet one of these laws, passed in 1539, ordered that royal proclamations would henceforth have the same status in law as statute. In other words, Henry used Parliament to eradicate the need for it and to make his word – quite literally – law. Similarly he condemned to death, through Parliament, an unprecedented number of people who were available for trial by the use of acts of attainder – acts of Parliament by which the accused was declared guilty and his property and life forfeited without trial or the need to cite precise evidence or name specific crimes. This is how Henry’s fifth wife, Katherine Howard, and first minister, Thomas Cromwell, Earl of Essex, were dispatched.

These actions reflect what the OED acknowledges to be an ethical component to tyranny: the exercise of ‘power in an oppressive, unjust, or cruel manner’. This is reminiscent of other 16th-century definitions. Erasmus, writing in 1516, noted that a ‘tyrant governs by fear, deceit and evil cunning … [and] brings it about that everyone is under his thumb’. William Thomas in 1548 (in the first biography of Henry VIII) argued that:

The principal token of a tyrant is the immoderate satisfaction of an unlawful appetite, when the person, whether by right or wrong, hath power to achieve his sensual will, and that person, also, who by force draws unto him that which of right is not his.

This makes tyranny an ontological category, defined by an avariciousness of character. By these standards, Henry VIII may surely be accused of tyranny.

What purpose is there in this subjective value judgement? The role of the historian is to explain why Henry acted as he did and the consequences of his actions. Yet it is impossible to know how he would have been perceived and his deeds received in his own age without judging him by those contemporary standards. Similarly, the present-day public wants to know who Henry was. In giving the answer we cannot, as Macaulay wrote of Charles I, ‘leave out of our consideration his conduct in the most important of all human relations; and if in that relation we find him to have been selfish, cruel and deceitful, we shall take the liberty to call him a bad man’.

Suzannah Lipscomb is Convenor for History and Senior Lecturer in Early Modern History at the New College of the Humanities, London. Follow her on Twitter @sixteenthCgirl