The son of a fisherman's revolt against Spanish taxes on fruit in Naples, on 7 July 1647, was part of a wider challenge to Spanish overlordship throughout the Habsburg domains. 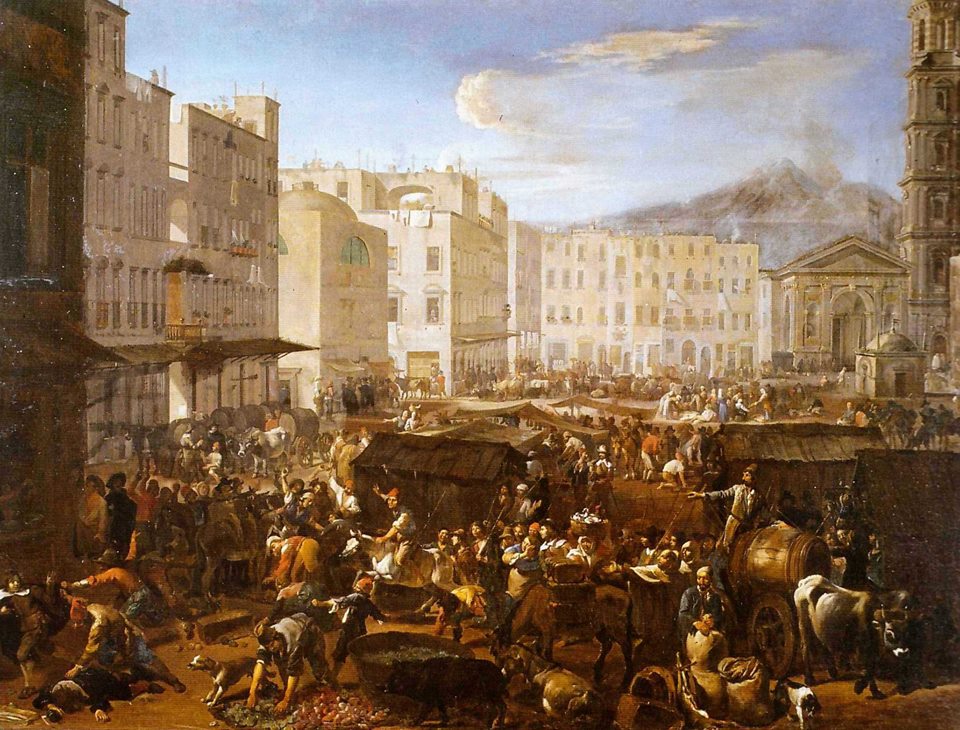 The extraordinary nine-day wonder that saw a Neapolitan fishmonger's son at the head of popular insurrection against Spanish overlordship should be seen in the general context of challenges to the status quo throughout the Habsburg domains which for a time threatened the territorial unity of Spain itself in the wake of the strains and setbacks provoked by the Thirty Years' War.

Those pressures which had eventually brought about the downfall of Philip IV's chief minister Olivares in 1643, continued to tempt the Spanish to exact more resources from their possessions in Italy, particularly Naples, which Philip IV described as `a gold mine which furnished armies for our wars and treasure for their protection'.

By the mid-seventeenth century, Naples, which had been ruled by Spain since the previous century, had a population of over 300,000 - an overcrowded wealthy but socially-volatile city on which the Spanish viceroys levied heavy taxes, particularly on fruit and a range of other foodstuffs and daily necessities. At the same time the Viceroys had generally assumed that a policy of `divide and rule' and the throwing of scraps of patronage to the native Neapolitan nobility, would maintain Spanish rule as it had always been.

Among the latter's critics however, was the cleric and academic Giulio Genoino, who for three decades had attempted to influence the Spanish authorities in the direction at constitutional change to involve the Third Estate in the deliberations of the council that governed the city under the Spanish Viceroy. Returning to Naples in the 1640s after periods of imprisonment and exile for his views, Genoino took up as his protege the young Tommaso Aniello - or Masaniello as he became Known - son of a fisherman from Amalfi, who had been engaged in smuggling, spent time in prison but was now a well-known figure on the streets and in the markets of Naples.

The new Viceroy sent by Spain to Naples in February 1646, the Duke of Arcos, had come with instructions to raise large sums of money in a hurry for the faltering Habsburg empire. The new takes he Introduced included another levy on fruit and despite an outbreak of popular protest at the end of 1646 the Viceroy reneged on a previous promise to abolish it.

Under the tutorship of Genoino, Masaniello made contacts among the street urchins of the market under cover of recruitment for a midsummer entertainment. The authorities seemed oblivious to the potential menace nor did they take warning from riots over the water in Sicily, over economic problems and bread shortages.

On July 7th Masaniello staged a demonstration in the fruit market where two of his relatives refused to pay the excise on fruit. Things escalated into a riot with street urchins pelting the police called to restore order. Genoino arrived to orchestrate the protest but Masaniello took things into his own hands - and led a mob of nearly a thousand which ransacked the armouries and opened the prisons, leaving him in charge of the city.

With his troops outnumbered and disarmed, the Viceroy tried to placate the insurgents by abolishing taxes and proclaiming Masaniello as Captain-General of the People, but by now the momentum of events carried the latter and Genoino to demand more reforms. With the Archbishop of Naples acting as a mediator Genoino and Masaniello demanded parity between people and nobility on the city council and a new charter for Naples.

The Viceroy gave way but the nobles of Naples were resistant: there was an attempt to assassinate Masaniello but then on July 13th, dressed in finery and a golden chair he was confirmed Captain-General in a solemn ceremony in the cathedral.

This, however, was the apex of Masaniello's fortunes with him rapidly and uncannily echoing the irrational behaviour of his populist Roman predecessor 300 years before, Cola di Rienzi (whose rise and fall was chronicled in May's `Freeze Frame'). After escaping from house arrest on July 16th. Masaniello went to the Church of the Carmine where me Archbishop was celebrating mass for the Feast of Our Lady of Carmel, and blaspheming, denounced his fellow-citizens. He was again arrested and taken to a nearby, monastery where he was murdered and his head paraded on a pike around the streets of Naples to a populace that had grown tired of his novelty.

The fall of Masaniello did not restore order: still nervous, the Viceroy tried to leave the city's governance in the hands at Genoino who proved unable to resist demands from the streets. extremists took over and a second revolution took place in August which culminated in Geneino's exile and the proclamation of a Neapolitan republic under French protection.

It was not until April 1648 that the Spanish eventually recovered Naples when Philip IV's illegitimate son, John of Austria, was handed back the keys of the city, The Masaniello revolution had passed into history as one of those lightning episodes in Italian history that showed the tension between resentment at foreign control and the dead indolence of a status quo that delayed national unification until the nineteenth century.