Hugh Purcell tells how Kitty Bowler, a young American, captured the heart of Tom Wintringham, the 'English Captain' at Jarama. 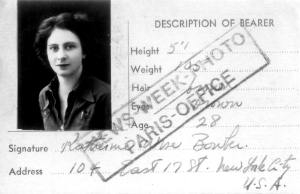 In Barcelona in September 1936 it was said that everybody was ready for the unexpected; sometimes it happened. Kitty Bowler, an American journalist, was wandering past the city’s Café Rambla when she eyed ‘a moving forest of bare knees. Only England could produce anything so incredibly tall and fresh as these boys. Then a soft-voiced bald man touched my arm: “You must join us,” he said’. He was Tom Wintringham, a ‘big shot’ in the Communist Party of Great Britain (CPGB) and soon to be the ‘English Captain’ at the Battle of Jarama. Only a few days later he proposed to Kitty, in his words, ‘curtly, nervously, without prejudice to any other interest either might have in people a thousand or three thousand miles away’.