Amid the instability of post-revolutionary Haiti, torn between Britain and France, Henry Christophe rose from lowly roots to become its ruler. Paul Clammer remembers his vital role in shaping a new kingdom. William Wilberforce wrote to his fellow abolitionist Zachary Macaulay on January 7th, 1815 about a letter he had received unexpectedly. It weighed 85 ounces, so Wilberforce was relieved that the post office had waived the due postage of nearly £38 in favour of a more modest seven shillings.

The letter was from Haiti, once the French colony of Saint Domingue, but then marking a decade of independence after its successful slave revolution. The country had been split in two by civil war soon after gaining its freedom, with the north declaring itself a kingdom. Wilberforce’s correspondent was its secretary of state and bore the title of Duc de Limonade. He was writing on behalf of his king, Henry Christophe, who wanted to open a dialogue of mutual support with the abolitionists.

Wilberforce was beside himself: ‘How strikingly do we see the just and good dispensations of Providence produced by ways’, he wrote, ‘in which at the time we little see the point to which we are tending!’ Haiti, having thrown off the yoke of slavery, could shine a new light on the abolitionist cause. Emancipation would mean the march of civilisation rather than a descent into anarchy and, for Wilberforce, the regal Henry was the figure to prove it. 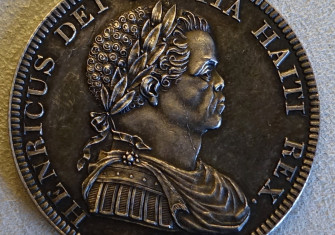