Joan of Arc born at Domrémy

The Maid of Orléans was born on January 6th 1412: she has been an incarnation of French national identity and pride for six centuries. 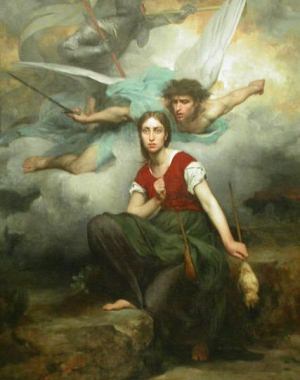 The Maid of Orléans was only 19 years old when the English burned her alive, but such is her fame that there are more than 20,000 books about her in the Bibliothèque Nationale in Paris. She herself did not know when her birthday was or exactly how old she was, but one Perceval de Boullainvilliers in a letter written in 1429 said she was born on the night of the Epiphany in 1412 and that is the date now widely accepted.

Joan came from the village of Domrémy in the Lorraine area of northeastern France (now Domrémy-la-Pucelle in her honour). Jacques d’Arc, her father, was a farmer of modest means though of some consequence in the village and her mother, Isabelle or Romée, taught Joan to say her prayers. Joan grew up pious and strong-minded. When she was about 12 or 13 it seems that she started to see visions and hear voices of figures that she identified as St Michael the Archangel, St Catherine of Alexandria and St Margaret of Antioch. They told her that she had a divine mission to fight and defeat the English. She would hear their voices many more times in her life and the saints could not have suited her better. There was no more formidable warrior-saint than the Archangel Michael and St Catherine and St Margaret were both virgin martyrs who refused to take orders from men.

The French monarchy was in desperate straits. Henry V’s victory at Agincourt in 1415 was followed by further French defeats and in 1420 the Treaty of Troyes recognised Henry V as the heir to Charles VI of France (who suffered repeated bouts of insanity). The treaty disinherited his son, the Dauphin, also Charles, whose position was weakened further when the Duke of Burgundy allied himself with the English.

In 1422 Henry V and Charles VI died within two months of each other, leaving the new English king, Henry VI, less than a year old, as titular King of France. His uncle and regent, the Duke of Bedford, took over operations in France.

By January 1429 large areas of France were under English or Burgundian control and the English were besieging Orléans, one of the few cities still loyal to the Dauphin. Joan of Arc now took action. Aged about 17, she must have been astonishingly impressive and she persuaded one of the local lords to give her an escort to the Dauphin’s court at Chinon. She travelled there dressed as a man. According to a report at the time, her escort thought she was daft and intended to dump her in a ditch, but somehow found themselves doing whatever she said. At Chinon, prompted by one of her divine voices, she instantly recognised the Dauphin from among the other nobles, although she had never seen him before. She persuaded him to authorise her to go to Orléans and drive the English away.

Borrowing items of armour so that she could dress herself as a knight and brushing aside the irritation of many of the French nobility, she led French troops to victory in a series of shrewdly directed attacks that forced the English to abandon the siege and retreat. In the last action she was wounded in the neck by an arrow, but still led her men in the final decisive charge.

French morale blossomed and the Dauphin appointed Joan to joint command of his army. She led it in a succession of victories to Reims, which opened its gates in July. She was present when the Dauphin was crowned there as tradition required, as Charles VII.

Many of her defeated opponents thought Joan must be a witch, directed not by the voices of saints but by the devil. The Duke of Bedford called her ‘a disciple and limb of the Fiend’. Her dressing as a man added to this impression. In May 1430 she was captured by the Burgundians and sold for 10,000 francs to the English, who had her tried for heresy. The ecclesiastical court condemned her and she was burned at the stake in Rouen on May 30th, 1431. Care was taken to make her death as agonisingly slow as possible.

Canonised in 1920, Joan has been an incarnation of French national identity and pride for six centuries and every aspect of her life has been pored over, disputed, denied or reassessed. That an uneducated teenage peasant girl should have had such an impact makes her one of history’s marvels. 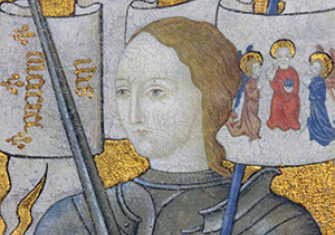 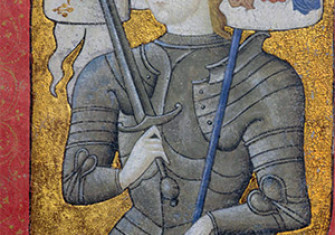