Ivan became Grand Prince on March 27th 1462, following the death of his father. 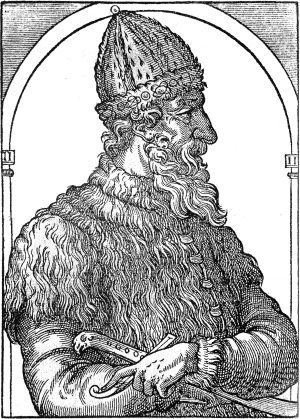 In the 13th century Moscow was the capital of a small state which paid tribute and provided forced labour to the Khans of the Golden Horde, Tatar masters of a an area stretching from eastern Europe to Siberia. Over time the Muscovite princes gradually expanded their territory until they gained independence under Ivan III, known as the Great.

Born in Moscow in 1440, Ivan gained first-hand experience of politics, family treachery and war from his childhood. A struggle for power was in progress between his father, Vasily II, and Vasily’s uncle Yuri and his sons, who seized Vasily in 1446 and blinded him. Ivan was handed over to his cousins, but Vasily soon regained power and trained Ivan to follow him. Becoming grand prince at the age of 22 on his father’s death, Ivan campaigned against the Tatars. His first wife, to whom he had been betrothed at the age of 12, died in 1467 and in 1472 he married the niece of the last of the Byzantine emperors and later took the Byzantine double eagle for his coat of arms. Meanwhile he succeeded in conquering the far larger principality of Novgorod to the north, which he claimed had allied with the Lithuanians against him. He shrewdly took over the ancient Novgorod Chronicle and made it a propaganda vehicle for his regime.

Other campaigns extended Ivan’s territory and in 1480 he succeeded in gaining independence from the Tatars. He dealt with a rebellion by two of his brothers, whose estates he annexed, and plots against him by his wife and their eldest son. He added part of the Ukraine to his domains and by the time of his death in Moscow at 65 in 1505 Ivan had tripled Muscovy in size and taken a grip on the running of his realm. Little is known about his personality, except that he enjoyed women and getting drunk, but he was a key figure in the evolution of modern Russia.