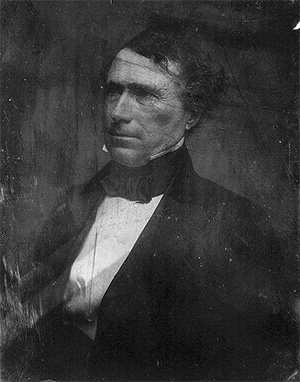 Franklin Pierce was no one’s initial choice as fourteenth President of the United States, not even his own. The Democratic convention of 1852 took forty-nine ballots to settle on him as its candidate after failing to agree on any of the more fancied runners. Pierce was comparatively unknown, a lawyer and former Senator from New Hampshire. He had held a command in the Mexican War in the 1840s, though an unfair allegation of cowardice and his heavy drinking gave opponents a chance to sneer at him as ‘the hero of many bottles’. Even so, he won the election handily, defeating General Winfield Scott for the Whigs.

At his inauguration the new president caused some surprise by affirming instead of taking the oath, a decision he never explained, and he was the first president to deliver his speech from memory. In it he expressed the vain hope that the slavery issue was now ‘at rest’ and that there would be no further ‘sectional or ambitious or fanatical excitement’ about it. He signalled his support for the expansion of the United States and in his term of office he tried to buy Cuba and sent Commodore Perry to open up Japan. It was in Pierce’s time that the United States took its first official step to the creation of an overseas empire. It was a question of bird droppings, required as fertiliser. In 1856 Congress authorised the annexation of any uninhabited or unclaimed island from which guano could be recovered, and more than seventy Pacific and Caribbean islands were commandeered in the next thirty years.

Pierce’s presidency, however, was not considered a success. Far from being ‘at rest’, tensions over slavery in the South were sharpening. Pierce was a firm believer in states’ rights and the overriding importance of preserving the Union. Anti-slavery campaigners called him a ‘doughface’, a northerner with southern principles, and considered him far too close to his secretary for war, Jefferson Davis of Mississippi (the future President of the Confederacy). The last straw was the Kansas-Nebraska Act of 1854, which brought the two territories into the Union. Southerners in Congress would not accept a ban on slavery in the new states. The decision that the settlers should decide the matter for themselves created a tremendous uproar, split the Democrats and caused the creation of the new Republican party.

Pierce’s support for the Act cost him any hope of a second term. The Democratic convention of 1856 rejected him in favour of James Buchanan of Pennsylvania, who won the election. John C. Frémont carried eleven states for the Republicans. Pierce retired to New Hampshire, where he died in 1869, aged sixty-five.