Hussein made King of Jordan

On August 11th, 1952, the Jordanian parliament declared that King Talal was suffering from schizophrenia and was unfit to rule and that Hussein was now King of Jordan. 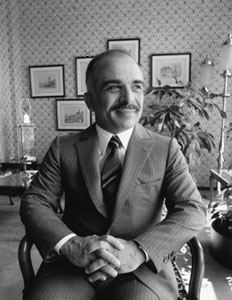 The crown prince of Jordan was staying with his mother in a hotel in Switzerland when a letter was delivered to him on a silver salver on August 12th. It was addressed to ‘His Majesty King Hussein’ and it gave him a shock. Hussein’s father, King Talal, was normally a gentle, well-meaning person, who had been unable to stand up to his own larger-than-life father, King Abdullah. Few people could, but Talal’s mental condition had begun to cause misgivings. After Sandhurst and the Iraqi Military Academy, in 1934 he had married his mother’s niece, Zein. Their eldest son, Hussein, was born in Amman the following year and there were two more sons and a daughter.

The family lived modestly and presently Hussein was sent to school in Egypt, to Victoria College in Alexandria, which was run on British public-school lines. When he was fifteen, in July 1951, his grandfather King Abdullah took him to visit the Great Mosque in Jerusalem. As they went in, Abdullah was shot dead by an assassin. Hussein was only a few feet away and the fanatic fired another shot straight at him, but the bullet ricocheted off a medal on Hussein’s chest. The assassin was killed by the royal bodyguard and Hussein, still in shock, was flown back to Amman. At this point, Talal was in a Swiss clinic recovering from a nervous breakdown, but his wife Zein fought his corner in the capital until he was able to return to Jordan in September to be crowned. Hussein was now sent to Harrow School in England, where the headmaster summed him up as headstrong, vigorous and determined. The matron thought him highly-strung and often lonely.

His schooldays were almost over, for his father’s condition was deteriorating. In May the following year a council of regency was appointed to take over Talal’s functions while he went to France for treatment. His wife, Hussein and the younger children went with him. Early in June it was announced that the king’s condition had got worse. Queen Zein was now frightened of him. She tookHussein and the other children to Switzerland and refused to let her husband know where they were. When Talal arrived in Lausanne to look for them, she was given police protection against him. On June 23rd he was allowed to talk to his wife and by the 27th he had been persuaded to go back to Jordan, while Zein and the children remained in Switzerland.

On August 11th the Jordanian parliament regretfully declared that King Talal was suffering from schizophrenia and was mentally unfit to rule, that his reign was at an end and that Hussein was now King of Jordan. Hussein was still only sixteen and a regency council was appointed to act for him until he came formally of age the following year. Talal accepted the situation gracefully and retired to Istanbul, where he was to die in 1972. Queen Zein stayed in Jordan. Hussein, meanwhile, would remain on the throne of Jordan for forty-six years, surviving numerous assassination attempts and attempted coups and winning a civil war against the Palestine Liberation Organisation inside Jordan in 1970-71 before dying at Amman in 1999 at the age of sixty-three. It is hardly surprising that when he wrote his autobiography, he called it Uneasy Lies the Head.