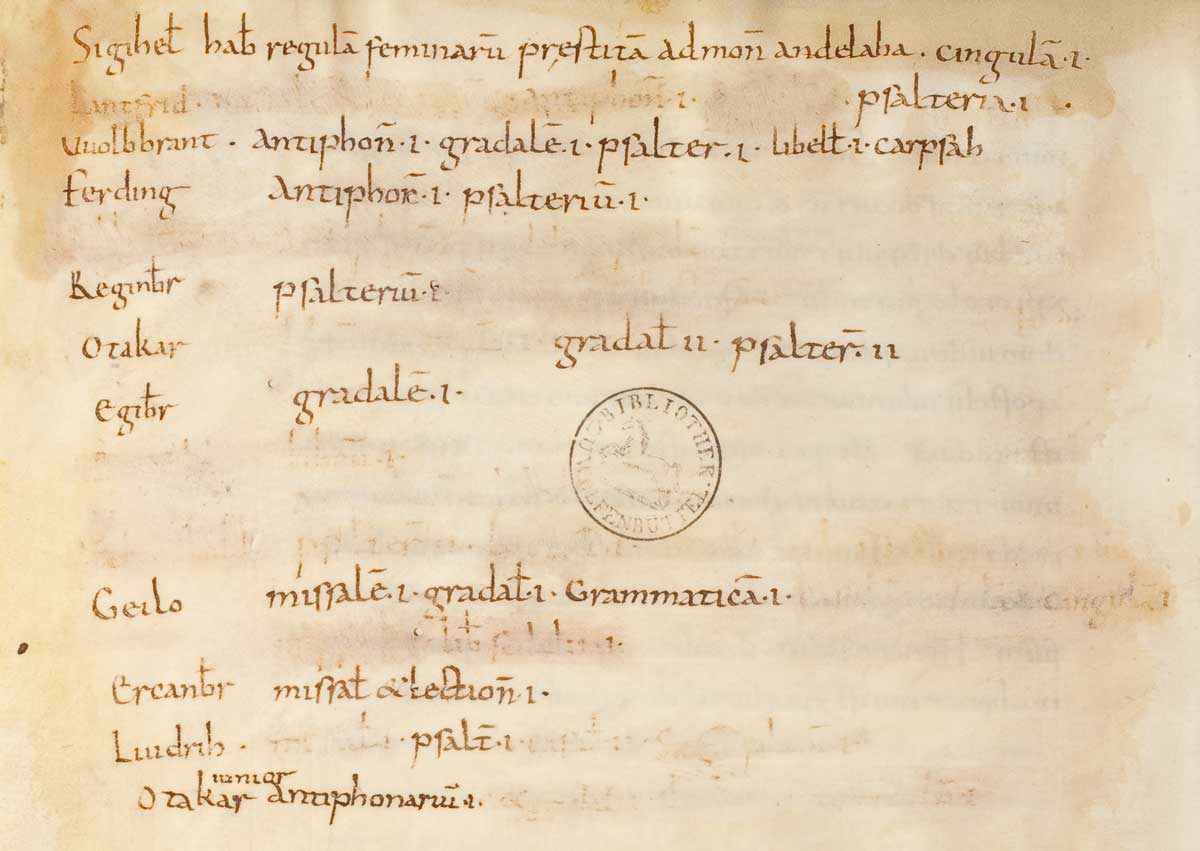 When we picture the libraries of the Middle Ages, we see heavy tomes chained to wooden benches, far away from an accessible open space. It is a place forbidden, guarded jealously by the hooded librarian of The Name of the Rose, Malachi of Hildesheim – a domain of men. No books can leave this prison.

This is, however, at least partly, a misleading picture, rooted in our prejudice about how we picture the way early medieval literacy and book culture functioned. Fortunately, we have glimpses of how this world of reading looked in reality. The answer is held by the manuscripts themselves; not in their initials decorated in gold and blue, but in the final pages and marginal notes that preserve the record of the daily lives of early medieval libraries.

At the very end of the ninth century the monks of Wissembourg Abbey, today eastern France, started to keep a track of who borrowed books from them. They did this in a quick script on the last pages of a beautiful copy of Hilary of Poitiers’ commentary on the Gospel of Matthew, preserved in the Herzog August Library in Wolfenbüttel, Germany. Early medieval libraries lent books often and lending books for copying was, in fact, seen as an act of Christian charity. The books were borrowed not only by other monasteries but also by local priests and lay people.

The list kept by the meticulous monks of Wissembourg was perhaps maintained until the middle of the tenth century. It is a living list. Writing on parchment can be scratched out, but traces left by the pen remain, which allow us to decipher the hidden letters. That is why we know, for example, that a certain Lantfrid borrowed an antiphonary (a book containing religious chants), but because his name was scratched out, he was a good patron and gave it back. There is no way of knowing if the librarians kept track of every returned book; it would be highly unlikely that all the books that were not scratched out from the list had not been returned. After all, a single one of those volumes could be made from more than a hundred animal skins; a fortune in the tenth century.

These lending lists (for the Wissembourg one is by no means the only one) preserve a unique window into the communities created by monastic libraries. Many members of those communities were local priests, such as Geilo. Under his name we see that he has borrowed some liturgical manuscripts, among them a missal (noted next to his name as ‘missalem’), which is a hint at his priestly identity. But he also borrowed a book on grammar (‘grammaticam’). Perhaps he wanted to perfect his Latin, or maybe he had encountered a difficult text and needed some help.

But not all users of the library were priests; and their interests were wide-ranging. The lists show lay people borrowing texts associated with deep theological disputes, such as papal decretals or works of Rabanus Maurus (a leading poet and theologian of the Carolingian period). This made the boundary between the monastic library and its community porous, but at the same time bound them together.

Quite a few of the users were women, too: voracious readers as it turns out. Their names show that they were mostly interested in religious literature and could certainly read, if not write. Sigihel, for example, borrowed a book on how to lead a more devout life. Psalters were particularly popular: they were borrowed by ‘lady Liutgard’ and ‘another Liutgard’ as well as ‘wife of Reinbold’ and the ‘widow of Gerold’. These women’s interest in religious books is important for several reasons: it means they could read them on their own, that they could shape their personal devotion and that they had a standing allowing them to be entrusted with books. This is information we would not otherwise have.

Those lay people who had the chance to learn to read and write in the early Middle Ages were often instructed in monastic schools. But literacy was by no means as widespread as it is today and remained a privilege. In the final pages of another manuscript, we find a rare glimpse into the world of female education. In a collection of school texts used for instruction in a monastery of secular canonesses in Essen in the ninth century is a letter from a schoolgirl to her teacher:

Mistress Felhin, allow me to stay up this night with mistress Adalu and I swear with both my hands that I will not stop reading or singing on behalf of our Lord throughout the night. Farewell and do as I ask you.

Just below the letter, in a different script, presumably that of mistress Felhin herself, we find that the schoolgirl was successful. Valete in domino, ‘Go with the Lord’, writes the headmistress. The canonesses in Essen had a substantial library at their disposal.

The communities created by libraries included not only clergy and members of religious communities, but also lay men and women, who used the books to pass time, to pray and to gain knowledge. As it is today, learning to read and write was a chance to change your life and to ask for – and sometimes get – what you wanted.

Mateusz Fafinski is a postdoctoral researcher at the University of Lausanne.