In Ukraine, it’s not just the future which is at stake. It’s the past, too.

Not long ago, looking for a short history of Ukraine in a central London bookstore, I was offered the following memorable advice: ‘Look under Russia’.

I did. And between shelves groaning with the glories of Russian history, from the love affairs of Catherine the Great to the crimes of Joseph Stalin, I found two thin volumes on Ukraine, a country of some 46 million people. One was decorated with an impressionistic painting of the 2004 Orange Revolution. I bought both. I doubt very much they were immediately replaced.

‘Looking under Russia’ is, perhaps, an appropriate metaphor for Ukrainian history.

Since the Pereiaslav/Pereyaslav treaty of 1654, Ukraine has only enjoyed statehood independent from Russia at moments of extreme geopolitical dislocation, such as in the final days of the First World War, in the wake of the Russian Revolution of 1917. Russian nationalists today appear to view Ukrainian independence as a similar aberration, the consequence of what Vladimir Putin labelled the greatest geopolitical disaster of the 20th century: the collapse of the Soviet Union in 1991.

Though wrong, the idea that Ukrainian history is really just an annex of the sumptuous many-roomed mansion of Russian history is common. To some degree it is understandable. Ukraine and Russia have shared triumph and tragedy from the birth of Kyivan/Kievan Rus (the first proto-Russian state) through the wars against the Poles in the 17th century to bloody struggle against fascism in the 20th.

The historical links between the two countries, ancient and modern, are manifold and profound. The Orthodox churches of Ukraine and Russia share a patron saint – St. Vladmir or St. Volodmyr – whose statue (spelt the Ukrainian way) stands proudly on a street corner in west London. On the edge of Kyiv, the Ukrainian capital, a huge concrete museum complex inaugurated in the early 1980s commemorates the Great Patriotic War (1941-45). Outside, a silvery figure of a woman, 200 feet tall, holds a sword aloft in one hand, and a shield with the emblem of the Soviet Union in the other. This is a memorial to shared sacrifice – eight million Ukrainians died in the war – and a shared victory. Seventy years after the end of the war, and nearly a quarter century after the collapse of the Soviet Union, such narratives are still powerful.

For a long time, Russians saw Ukrainians as being little more than country bumpkin relatives. Theories of Slavic ethnogenesis described the two peoples as siblings born of the same Slavic womb: the ‘Great Russians’ (Russians) on one hand and the ‘Little Russians’ (Ukrainians) on the other. Ukrainian literature, which began to emerge in the 19th century, was patronisingly viewed as the picturesque product of a peasant society, essentially subordinate to Russia’s own literary canon, even when it produced such great poets as Taras Shevchenko. The fact that the flowering of Ukrainian national culture was strongest in western Ukraine, then part of the Austro-Hungarian Empire, made some Russians dismiss the whole thing as an anti-Russian ruse sponsored by external forces, a familiar refrain to those heard today.

In the Soviet period the idea of Ukrainian nationhood was viewed with similar suspicion, now additionally freighted with suggestions it was intrinsically counter-revolutionary. In April 1918, as Russia imploded in revolution, a conservative German-backed regime was set up in Kyiv. Its leader Pavlo Skoropadsky revived the title of Hetman, an ancient Cossack military title last held by a man who had died aged 112 in 1803, in a remote Russian monastery which the Soviets would subsequently turn into a gulag. Later, in the Great Patriotic War, some Ukrainians signed up with the Germans to fight the Soviets – some even joined the SS. Nationalist anti-Soviet actions continued into the 1950s – providing the basis in historical memory for the contemporary lumping together of even moderate Ukrainian nationalists with right-wing extremists as ‘fascists’ and ‘bandits’.

In the Soviet era Ukrainian national identity was never completely subsumed into Russian or Soviet identity. Sometimes this could be useful to the Soviet state. In 1939, when Galicia, Volhynia and Bukovyna were annexed to Soviet Ukraine as a result of the Molotov-Ribbentrop pact and Stalin’s co-invasion of Poland, the Ukrainian Supreme Soviet sent this message to Stalin: ‘Having been divided, having been separated for centuries by artificial borders, the great Ukrainian people are reunited forever in a single Ukrainian republic’. In 1945, professions that Ukraine was not a Soviet vassal but in fact an independent Communist state allowed Ukraine to join the United Nations as a founder member alongside the USSR, thus giving Moscow an extra vote in UN proceedings.

The process through which the borders of modern Ukraine were defined, both in the west and on the Black Sea, was part and parcel of Russia’s own headlong expansion through three centuries of Eurasian history. In the 1700s and 1800s, as the Russian geopolitical imagination became obsessed with the idea of turning the Black Sea into a Russian lake – perhaps even going so far as to seize control of Constantinople/Istanbul – the Ottoman Empire was bloodily and repeatedly pushed back from its redoubts on the northern side of the Black Sea. The Ukrainian provinces were the territorial beneficiaries. The country became ever more tightly integrated into the economics and politics of the growing Russian empire, serving as its breadbasket, and as its route to the sea.

At the end of the 18th century, German-born Catherine the Great founded the port of Odessa – and its hinterland of New Russia – with the help of a Spanish-Irish Neapolitan and, later, a French aristocrat. The city filled with Greeks, Bulgarians and Jews. Pushkin was sent there as punishment, and promptly started an affair with the wife of the city’s Russian governor. Among countless others, Odessa would ultimately produce Trotsky and Akhmatova, two titans of Russian politics and culture, before becoming the site of some of the worst massacres of the Holocaust.

Further east, through war, colonisation and the ethnic cleansing of its Muslim population, Crimea, the last remnant of the Mongol Golden Horde, was turned into the finest jewel in the Russian Empire. As proverbial pleasure garden for late imperial flings (as recounted by Anton Chekhov), then fantasy holiday camp for Soviet factory managers and key to Russia’s southern flank (as base of the Black Sea fleet) Crimea became firmly embedded in Russians’ psychological geography as their own private playground. Less than a century after the Tsars had conquered it, Stalin chose Crimea as the place to redraw the map of Europe once more in 1945.

Nine years later, when former Ukrainian party boss Khrushchev transferred Crimea to the Ukrainian SSR in celebration of the 300th anniversary of the Pereiaslav/Pereyslav treaty, there was no thought that the internal borders of the Soviet Union would ever become international borders. It was only in 1991, as a result of an attempted coup (which took place, ironically enough, while Mikhail Gorbachev was on holiday in Crimea) that the peninsula spun out of the ultimate control of Moscow, with the Soviet superstructure itself being legislated out of existence.

The idea that Crimea became part of an independent Ukraine essentially by accident is gospel truth among Russian politicians. It is but a short step to view Ukrainian possession of Crimea as historically illegitimate. And therein lies the beginnings of a dangerous game. What happens next? Perhaps Ukrainian independence itself, or that of the Baltic states, is equally seen as the consequence of a set of historical circumstances which some might now like to reverse.

Where does a concern for history shade into revanchism? And how far does one’s historical perspective extend back into the past? Visions of the Crimea as eternally Russian wilfully forget the Muslim population which Russian and then Soviet power displaced and deported – sometimes violently, always tragically, and with little historical recognition. As late as the turn of the last century, before the cataclysms of the 20th, the Crimean Tatars represented nearly half the people of Crimea. Khrushchev recognised the deportation of the Tatars as one of Stalin’s crimes in his famous 1956 speech to the 20th Party Congress. It was not until the 1990s that many were able to come back.

Russia’s version of Ukrainian history, wrapped up in its own narrative of imperial rise and fall, from the Romanovs to the Soviets, helps explain Moscow’s attitude towards its southern neighbour – not in terms of objective interests, though these are real enough, but in terms of emotion, in terms of who is right and who is wrong. What makes things truly bad, from the Russian perspective, is that Ukrainians by and large no longer share the Russian interpretation of their history. The past looks different these days from Kyiv (still more from Lviv). Instead of Ukrainians cherishing their supporting role in Russia’s geopolitical greatness – which essentially means the power and prestige of the state – Ukrainians have come to cherish alternative narratives of their history, based around freedom and resistance. Rediscovering their past has been a critical part of asserting Ukrainian independence. Accepting the possibility of multiple histories, not just one, is a hallmark of democracy.

Episodes once viewed as the historical glue of the Russo-Ukrainian relationship have become contested. While Russians tend to see the Pereislav/Pereyaslav treaty of 1654 as a moment of reunification for the Russian and Ukrainian peoples, many Ukrainians see the same treaty as a temporary alliance between military leaders which the Russians subsequently interpreted to their advantage. In 2009, on the 300th anniversary of the Battle of Poltava – perhaps the most important battle in Russia’s 18th century history – then-President of Ukraine Viktor Yushchenko was blasted by Russia for suggesting that the Ukrainians who fought with the Swedes against the victorious forces of Russian Tsar Peter the Great were true patriots.

Similarly, while the famines of the early 20th century used to be viewed as a common experience of Soviet suffering, even as part of the forging of the Soviet industrial miracle, some now argue that the famines were, in effect, a Moscow-led assault on Ukrainians in particular. Some go so far as to suggest genocidal intent. The incorporation of western Ukraine into the Soviet Union in 1939 can still be seen in its traditional light: as the re-unification of the Ukraine under Soviet leadership. But for the old aged pensioners of Lviv – and increasingly for their grandchildren – it may be remembered as the beginning of a 50-year Russian occupation. And while Ukrainian nationalists in the Great Patriotic War used to be roundly condemned as nothing more than opportunistic, antisemitic fascist lowlifes – which some of them no doubt were – more savoury elements may now be rehabilitated, as in the modern Baltic states, as patriots caught in a vice between the equivalent totalitarianisms of Nazism and Communism. Some Ukrainians make what is, for many Russians, a sacrilegious parallel: Putin as Hitler.

For both Russians and Ukrainians, the interpretation of Ukrainian history is personal. As in all borderlands, the contradictions and complexities of the tangled past are reproduced over and over in the stories of families and in the identities of individuals. For the governments in Moscow and in Kyiv, history is political too. Narratives of the past can be spun to justify, oppose or defend different courses of action in the present. History can be a tool of influence – a tool of long-term psychological warfare even – used to manipulate the here-and-now, to give added emotional resonance to geopolitical imperatives or to claims of political legitimacy.

Bluntly put, history can be a kind of territory. In Ukraine, it is not just the country’s land which is being tussled over. It is the country’s past as well. If Russia and Ukraine are to live as respectful neighbours side by side, they will have to find a way to live with each other’s history too. 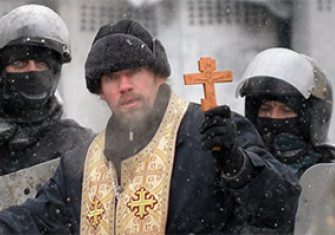 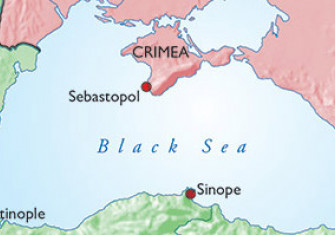