The turmoil in Ukraine has a strong religious dimension. Catherine Wanner asks if a common Christian heritage may yet help maintain relations with its Russian neighbour. 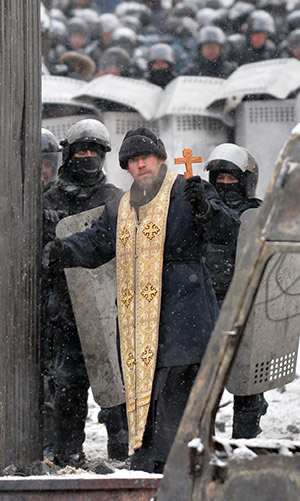 When the protests began in Kiev earlier this year an anarchist group put up a sign that read: ‘Country under reconstruction. Sorry for the inconvenience.’ Following February’s spectacular fall from grace of President Viktor Yanukovych, the country’s reconstruction has barely begun. Tearing down a vicious and corrupt regime will turn out to be the easy part. Building a viable government that accurately identifies the needs of the Ukrainian people and actually serves them will be the challenge. One thing is clear: religion will surely play a key role in this process. Clerical involvement in the protests, even in the new government, reveals the extent to which Ukraine has not only moved away from its Soviet past but also from modern Russia.