Alison Barnes reveals a new discovery about the Eddystone lighthouse: the first of its kind to be built on rocks in the sea. 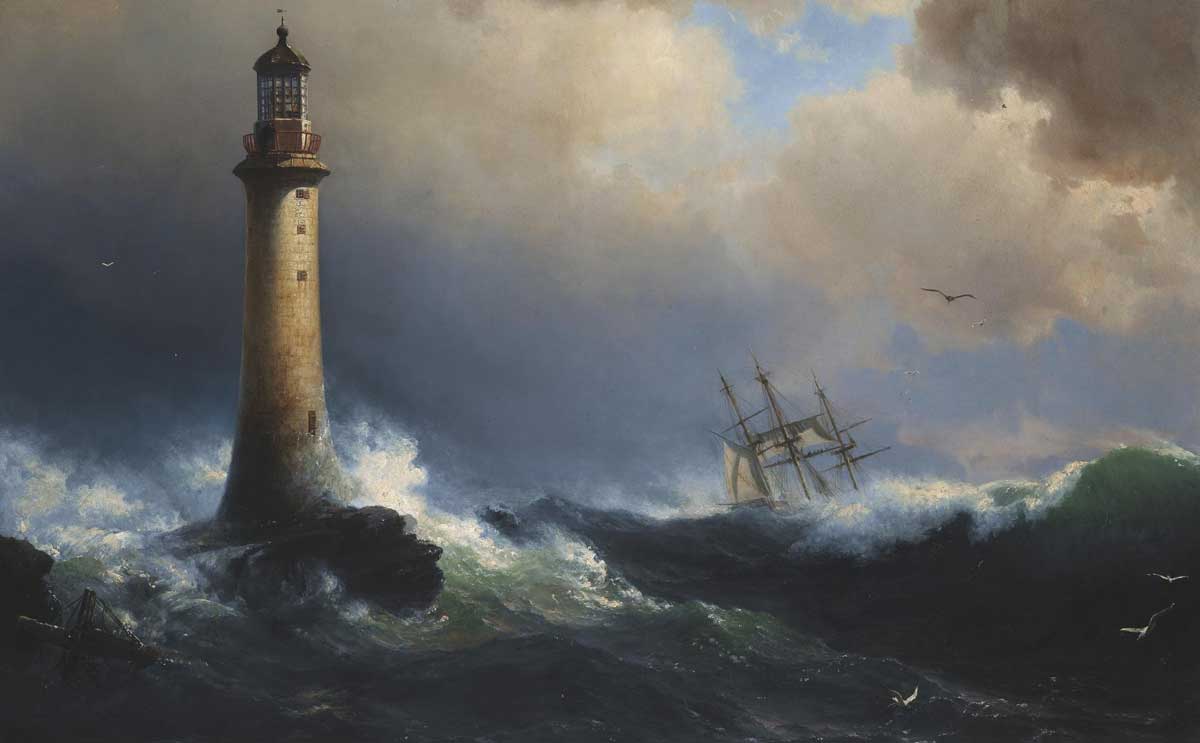 Fourteen miles south-west of Plymouth lies the treacherous Eddystone reef, a collection of shark-tooth rocks upon which, over the centuries, numerous men have lost their lives. However calm it may be near Plymouth, the sea at the Eddystone is usually a maelstrom of churning waves and leaping spray, as the complex currents around the reef meet the westerly winds blowing in from the Atlantic.

With the great increase in maritime trade that Plymouth enjoyed in the latter part of the seventeenth century, the Eddystone reef, straddling the entrance to Plymouth Sound, became an increasingly serious menace to shipping, about fifty vessels being wrecked on it every year. When in 1690 William III established a new naval base at Dock (later Devonport), to the west of Plymouth, he decided a lighthouse would have to be erected on these ‘infamous Rocks’.

The Surveyor-General of Works, Sir Christopher Wren, was occupied in rebuilding St Paul’s Cathedral and the City churches after the Great Fire of 1666, so could not construct the pharos. But Henry Winstanley, a close friend of both William and Wren, would, the King  considered, be the ideal man to tackle the project and could be granted time off from acting as the monarch’s Clerk of the Works at Audley End and Newmarket Palaces.

Not only was Winstanley an accomplished architect who had designed a dozen important English country houses, but, next to Wren, he was probably the most ingenious inventor of his day. He also possessed a will of iron and a powerful charisma that inspired total loyalty in his friends and subordinates alike.

Born at Saffron Walden, Essex, in 1644, Winstanley attended Walden Grammar School, then went to work in the estate office at nearby Audley End House, owned by the Winstanleys’ friend James Howard, third Earl of Suffolk. In 1669 the mansion was bought by Charles II.

Winstanley was promised the position of Clerk of the Works when he was old enough, and meanwhile went on a Grand Tour. On his return to England in 1674, he spent a year in London learning the art of etching from Wenceslaus Hollar.

In 1679 Winstanley was granted the clerkship of both Audley End and Newmarket palaces. In 1683 he married, and to amuse his wife Elizabeth he created for their home, Littlebury House, Essex, contrivances such as self-opening doors, perpetual motion machines, clockwork ghosts and a mechanical butler – the first English robot.

In 1691 Winstanley agreed to construct a lighthouse on the Eddystone reef ‘at his sole expense’ in exchange for part of the shipping dues. He financed the enterprise by renaming Littlebury House the ‘House of Wonders’ and opening it to the public, and constructing a ‘Mathematical Water Theatre’ in Piccadilly, where he put on displays with fountains and fireworks. Both ventures were hugely popular and generated the steady income he required.

Negotiations with Trinity House, the Attorney-General, Parliament and the King about the building of the lighthouse continued from February, 1692, until June, 1694, and were conducted on Winstanley’s behalf by his agent Walter Whitfield.

There was then a two-year delay. But finally, on July 15th, 1696, Winstanley and his team of twenty workmen left their Admiralty guardship, the Terrible, anchored close to the Eddystone reef, and were rowed over to House Rock, where they were going to construct the pharos.

In 1696 no one in Europe or America believed that it was possible to erect lighthouses on remote rocks. Putting his faith ‘in God’s assistance’, however, Winstanley was determined to build the first rock lighthouse in the world, and eventually did achieve his object.

Only during the summer could boats land at House Rock to unload men and building materials. But even then there were countless days when it was too stormy or foggy to do so. House Rock, although the most suitable rock on the reef, was steeply sloping, desperately slippery and soaking wet at all times because of perpetual spray, and the freak waves that broke over it even at low water. The men working on it were always drenched to the skin and sudden billows frequently carried off not only vital tools and equipment but the day’s rations of food and drink.

On June 24th, 1697, when England was at war with France and the Terrible momentarily absent, a new danger threatened when a French privateer swooped down on House Rock, partially destroyed the half-built lighthouse, took Winstanley to St Malo as a captive and set his workmen, stripped naked, adrift in their two longboats. Louis XIV, who admired Winstanley, ordered his release, however, and he was back at work on the Eddystone by July 6th.

On November 14th, 1698, the lighthouse was finished, and that night Winstanley lit the ‘60 Candles and great hanging Lamp’ that illuminated it, to the delight of the people of Plymouth.

During the winter gales of 1698, it became clear that the lighthouse was too flimsy to withstand the buffetings of wind and waves, so was replaced by a much sturdier structure in 1699. This remained in situ until the Great Storm of November 27th, 1703, when, tragically, the pharos, Winstanley, his keepers and a Plymouth workman were all swept away by the tempest, never to be seen again.

Until recently there has  been only one authentic pictorial record of the 1698 Eddystone lighthouse; an engraving by I. Sturt based on a drawing (now lost) made by Jaaziell Johnston ‘Painter’. This depicts an 80 ft-high tower with a solid circular stone base, octagonal stone middle section, open, wooden gallery, glass lantern and a weathervane supported by enormous wrought-iron brackets. A ladder leads up to an external staircase.

Last December, however, I discovered at the Bodleian Library two unknown plans of the lighthouse executed by an Admiralty draughtsman on August 8th, 1698, which provide us with an immense amount of new information. They show the back of the lighthouse and the staircase layout for the first time. And tell us that the building had two four-light windows and several doors.

The plans also reveal that by early August 1698, Winstanley had discarded the large, dangerously top-heavy weathervane brackets made for him by his friend Jean Tijou, the ironsmith, in favour of the small ones that he also used in 1699 when he built the new 120 ft-high lighthouse around the shell of the 1698 structure. Jaaziell Johnston must have done his drawing in July 1698 when most of the external work was complete, but this change had not yet been effected.

One of the plans from the Bodleian briefly names each storey of the building. But the second provides a full written description, giving the height and diameter of every room (they were all 14ft wide) and what each was used for. Thus, for example, the 5ft 6in-high cellar was ‘to stow coles in’. Above this was the 8ft 6in-high kitchen. And over the wooden gallery reposed the ‘Lodging Chamber’. Johnston wrongly thought that the 7ft 6in-high bedroom (state room) was over the cellar and the kitchen was at the top of the lighthouse, and labelled them incorrectly on his drawing.

Winstanley’s 1698 Eddystone lighthouse was a superb effort for its day. And it proved to a sceptical world that it was possible to erect beacon towers on desolate, sea-girt rocks.