Iraq faces an ongoing crisis of sovereignty, 90 years after independence.

On 3 October 1932 Iraq joined the League of Nations. Symbolically, the assembly’s vote to admit Iraq, which terminated Britain’s mandate over the country, marked its independence. But true sovereignty remained elusive. For Iraq’s monarchy, installed by British officials in 1921, independence brought a sense of anxiety, not triumph.

The end of the mandate came with a condition: the Anglo-Iraqi Treaty of 1930 allowed Britain to maintain military bases in Iraq and kept the country dependent on British aid and advisers. The Iraqi monarchy and government officials worried about the country’s vulnerability to foreign meddling. In response, they turned inward. Iraq mainly used its army and air force to police its domestic populations, including Kurdish nationalist rebels, Shia Arab tribes and, most devastatingly, the small Assyrian and Yazidi communities.

In 1933 the Iraqi government ordered its newly expanded army to suppress a potential Assyrian uprising in northern Iraq. The Assyrians were a mainly Christian indigenous community who, within Iraq’s borders, were largely refugees. The Ottomans had killed hundreds of thousands of Assyrians alongside Armenians in genocidal operations during the First World War. Throughout the mandate many Assyrian men had been armed by the British; they now aspired to form an independent enclave in the mostly Arab and Kurdish region.

The state’s reaction was merciless. The Iraqi army pursued and killed Assyrians, the air force bombarded Assyrian villages and irregular local forces joined to loot and destroy Assyrian homes and property, killing and displacing thousands. In August 1933 the army cornered hundreds who had fled the violence and taken refuge in the village of Simele where it slaughtered them. The commonly accepted Iraqi claim that only a few hundred male combatants died is, according to survivor testimonies, a lie.

When troops returned from the massacres, crowds greeted them with enthusiasm in Mosul and Baghdad; as far as most Iraqis were concerned, the Assyrians were imperial collaborators and the army had eliminated a threat to the nascent state. More Iraqis than ever enlisted but, under the provisions of the 1930 treaty, the military they joined was armed and advised by Britain.

In 1935 the Iraqi state used some of the practices it had established while crushing the Assyrians to face down revolts by rebels in Kurdistan and among Shia tribes in the mid-Euphrates region. A commentary in an Iraqi newspaper in May of that year lauded the use of their British-made warplanes, which it called ‘Iraqi airplanes bolder than eagles’, to quell the Shia uprisings ‘without shedding a drop of blood from the sons of our dear nation’.

But worse violence was to come in the autumn when armed Yazidis attacked representatives of the Iraqi state in their homeland of Sinjar, an act of resistance against mandatory conscription. The government responded with the same brutality it had unleashed on the Assyrians. Iraqi forces killed 200 Yazidis, destroyed 11 villages and placed Sinjar under martial law. It then transported Yazidi prisoners of war to Mosul, where they paraded the captured men. As military officers and police looked on, a jeering crowd of locals rushed to stab and throw stones at the captives, killing at least one. The Yazidi prisoners were subjected to rapid military tribunals; on thin evidence nine were sentenced to death and hundreds to long prison terms. Non-Muslim minorities were sometimes indistinguishable in the eyes of the state. Some Assyrians in Mosul were also arrested and charged with complicity in the Sinjar uprising.

The Iraqis who celebrated their military and eagerly lined up to enlist in the 1930s believed they were building a free Iraq. Yet, 90 years after its independence day, Iraq is still dependent. It has suffered multiple invasions by Britain and, more recently, by the United States. Its larger neighbour to the north, Turkey, maintains military bases in Iraqi territory and bombards Iraqi villages in its war against Kurdish militants. Iran, its other neighbour to the east, funds and trains a coalition of militias, which now constitute a substantial portion of Iraq’s security forces. Ancient artefacts now enrich foreign museums. For more than a century Iraq’s ostensible partners and liberators have dominated it and extracted from it: not only its oil but land, water, heritage and talent.

Iraq’s youth still struggle for a sovereignty that is endlessly deferred. In 2019 thousands staged demonstrations and sit-ins against corruption, failed governance and foreign interference, rallying behind the slogan: ‘We want a country.’ Some 500 of those protesters were murdered, largely by the security forces backed by Iran. In Iraq’s north, Turkey’s confrontations with Kurdish militants have also had terrible consequences. In July 2022 Turkish artillery struck a tourist resort near the city of Zakho, killing and maiming Iraqi families. One month earlier a Turkish drone killed a 12-year-old Yazidi boy. This atrocity met with a muted response from Baghdad. Meanwhile the tentacles of the US – its special forces and covert agents, the neoliberal restructuring of institutions, the scars of its invasions and airstrikes – are everywhere.

Iraq is not doomed; through every blow, its dissident tradition has endured. But generation after generation has paid a heavy price.

Arbella Bet-Shlimon is Associate Professor of History at the University of Washington and author of City of Black Gold: Oil, Ethnicity, and the Making of Modern Kirkuk (Stanford University Press, 2019). 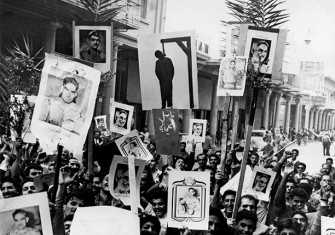 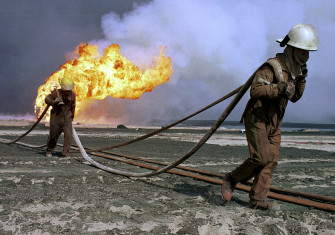 Learning Lessons in the Middle East