‘Crazy Jane’ was ubiquitous in the late 18th century, the archetypal figure of those driven mad by disappointed love. 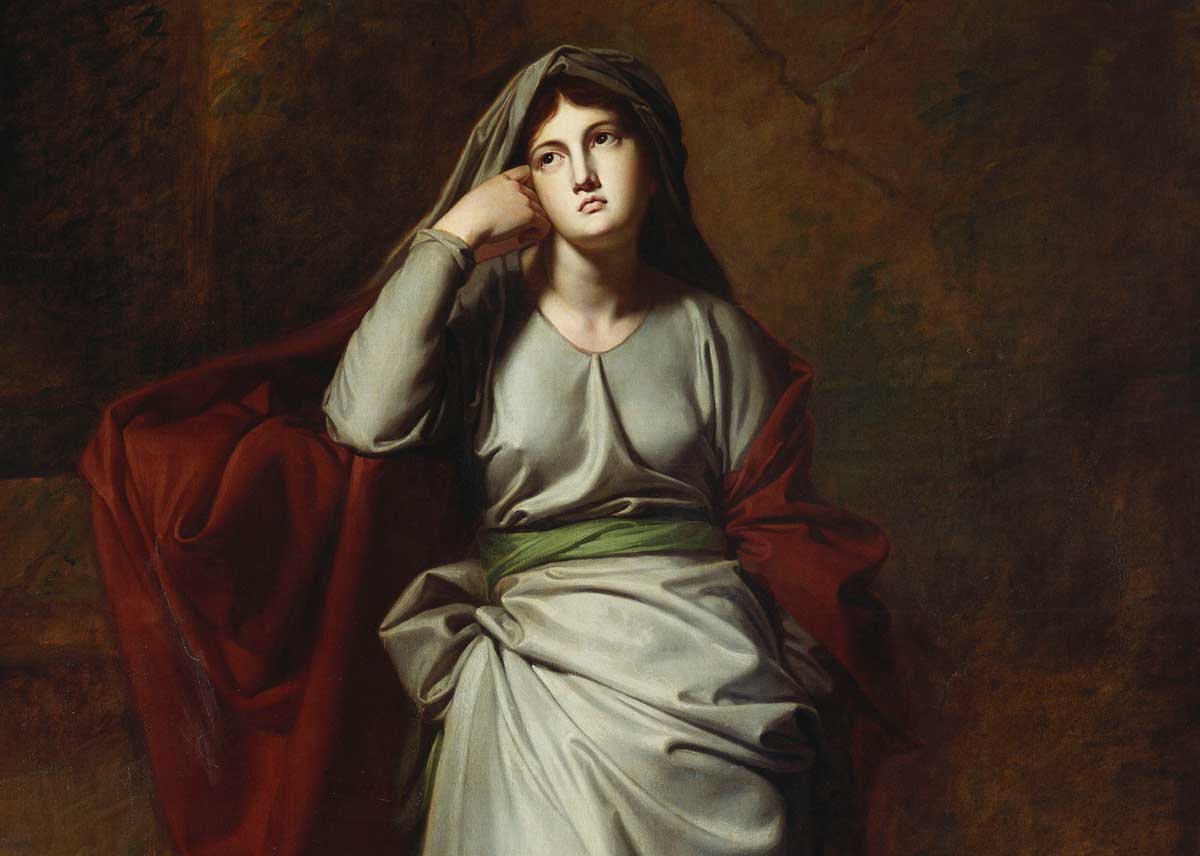 In 1796, Matthew ‘the Monk’ Lewis published a four-stanza poem telling the tragic tale of his ill-fated heroine, ‘Crazy Jane’. By 1799, Lewis’ words had been put to music and Jane’s story of heartbreak and mental collapse was shared across the country in music halls, assembly rooms and alehouses. On 1 May 1800, the Morning Post reported that, at ‘Mrs Methven’s Masquerade’ in Ranelagh, ‘Lord Pomfret unsexed himself in the character of Crazy Jane’. A few years later, a military fete in Horsham commemorating the victory of Trafalgar featured a ‘Crazy Jane’ among a parade of other popular characters.

Crazy Jane was by no means the only ‘love-mad’ female character popularised in the 18th century’s latter decades. Mourning the death of a lover, or abandoned after an affair gone wrong, this compelling archetype had already proliferated through a number of ‘crazy’ characters, including Maria from Lawrence Sterne’s Tristam Shandy (1767) and Sentimental Journey (1768) and Crazy Kate from William Cowper’s The Task (1785). Perhaps the best-known example of this is Shakespeare’s Ophelia. Pining after Prince Hamlet and mourning the death of her father, Ophelia had served as the original love-mad woman, but during these later years, the image became increasingly common.

A late 18th-century individual might have met Crazy Jane at a masquerade, read of Crazy Kate’s solitude in a periodical, seen a painting of Insane Maria at the Royal Academy of Arts, or watched a rendition of Hamlet with Ophelia taking centre-stage. Items including china, watchcases and pillboxes all bore their likenesses: Maria was regularly represented on Wedgwood china and, at one point, a ‘Crazy Jane Hat’ even circulated at London’s fashionable parties.

Each different interpretation of the distraught heroine shared a range of easily recognisable features. With downcast eyes, tear-stained cheeks and shabby dress, she was beautiful and melancholic, weak and unthreatening. Setting was also important: a dreary plain might show humble poverty, a stormy seascape could suggest psychic turbulence, or a bucolic wood her natural affinity with nature.

Part of her popularity was undoubtedly the ways that she appealed to the fashionable trend of sensibility. In the late 18th century, being visibly affected by the suffering of others was a way to demonstrate one’s sensitive virtue: shuddering, trembling, crying or sighing were markers of refinement. While the love-mad woman was by no means a new trope, having forerunners in Renaissance theatre and poetry, her emotional sensitivity now saw her resonate anew.

But sensibility fails to explain the scale of interest she provoked. While many scholars have dismissed her as overly sentimental – a pathetic construction of a mild melancholia that acted as a forerunner of the Victorian hysteric of the late 19th century – perhaps there were additional aspects of her character that caught the public imagination in this moment. As love-mad stories abounded across new forms of media, certain descriptions proved erotic, even dangerous. The earliest iterations of Crazy Jane, for example, alluded to sexual misbehaviour: one line of Lewis’ poem, describing Jane’s ill-fated sexual antics with her dishonest lover, Henry, read: ‘He was false, and I undone.’ Successive versions of Jane’s story only made her more transgressive. A chapbook of 1813, published by Sarah Wilkinson, described how Jane’s lover delighted her in a secluded grove, where she enjoyed the ‘seductive power of [Henry’s] tongue’. The cynical contemporary reader may have rolled their eyes in the face of earlier interpretations that framed Jane as naive and innocent: the character had become far more sexy, dangerous, erotic and exciting. Love’s madness was not just a literary phenomenon. Medical theory in the 18th century posited that women (and occasionally men) were driven insane by disappointment in love. Asylum case notes provide plenty of examples where love’s madness was given as a cause of insanity and, subsequently, of incarceration. William Black’s Dissertation on Insanity (1810) placed ‘Love’ as the fifth most common cause for admission of patients to London’s Bethlem Hospital; when visiting in 1772, a French tourist, Pierre Jean Grosley, commented that ‘all the people here were here because it was occasioned either by love or religious enthusiasm’; in 1804 the artist Joseph Farington wrote in his diary that ‘a Medical man who attended Bedlam had said that the greatest number of those who were confined were women in love’.

Such sources suggest that love’s madness is a more troubling malady than it first appears – a genuine pathological condition. Madness through love was a very real threat, not just one confined to literature. For those who had experienced the throes of heartbreak first-hand, the more unnerving aspects of a love-mad heroine’s story might have provoked intensely private recollections of brushes with sorrow, or, worse, mental illness. Perhaps, then, the popularity of the trope was more about protection, rather than celebration. Acquiring an object linked to love’s madness, such as a tea-waiter decorated with Maria’s face, or a chapbook that told Jane’s story, may have proved reassuring. The threat of love’s madness, and its associations with sexuality, morality and illness, was effectively downsized, safely stowed and contained. Buying, using and then putting them away in the safety of one’s home allowed the owner to take control of love’s madness, maybe imbuing these items with strange, almost talismanic properties. And at least the owner of these products was not in as bad a state as the melancholic Maria or wretched Ophelia. At the same time, they served as objects through which the owner might contemplate their own love life, relationships or even mental health.

Be she performed, read or owned, the love-mad woman was evidently many things. While she could serve as a harmless or consoling icon of sentimentality, there is more to her appeal. She might have prompted a titillating frisson due to the more sexualised aspects of her love-mad tale, an eye roll from an incredulous spectator, wistful thoughts about a past lover or a pang of fear about one’s own mental decline. Certainly, iterations of late 18th-century love’s madness could be sweet and saccharine, alluring or provocative, or menacing and marginalised – as succinctly embodied by the beguiling, moralising and ambiguous figure of Crazy Jane.

Anna Jamieson is Associate Tutor in History of Art at Birkbeck, University of London.