Newly discovered letters get us closer to understanding the tragic truth of royal murder-suicide at Mayerling.

Two gunshots echoed from Mayerling hunting lodge in the early hours of 30 January 1889, sending shockwaves through the Austro-Hungarian Empire. Crown Prince Rudolf was found dead alongside Baroness Mary Vetsera, his 17-year-old mistress. Mary had been shot by Rudolf, who, several hours later, turned the gun on himself.

In the following weeks the imperial family sought to erase all memory of the baroness’ presence at Mayerling, knowing that her murder would deny Rudolf a Catholic burial (his suicide was excused by an abnormality in the brain). This, combined with the mixed messages the royal household sent out to the public about Rudolf’s death, began a game of whispering and finger-pointing that continues today.

Mary, like many young girls her age, collected pictures of Rudolf. After seeing him from afar in April 1888, she wrote in her calendar that a ‘passion was born’. By that autumn she was determined to meet him and, having written him a fervent letter expressing her desire, her wish was soon fulfilled.

A meeting was arranged in the Hofburg, where Rudolf’s cousin, Marie Larisch, acted as chaperone. In a letter to her friend and old piano teacher, Hermine Tobis, Mary wrote that the Crown Prince begged Larisch to bring her back as soon as possible.

The two met often between then and January 1889, but it was not until 13 January that their affair was consummated. ‘We both lost our heads’, Mary wrote to Hermine, ‘and I became a woman! Now we belong to each other in body and soul.’ Her letter makes it clear this was Mary’s first sexual experience. This not only disproves the abortion theory (her pregnancy would not have been evident by the time of their deaths) but also casts shadows on the aristocratic authors and diarists who took the opportunity to malign the Vetsera family and describe Mary as a sexual adventuress and even a ‘titled trollop’, as Count Carl Lonyay named her in 1949.

The encounter meant so much to the baroness that, two days later, she bought a cigarette case engraved with the words ‘13th January, thanks to fate’ and requested in her farewell note to her sister that she leave flowers on her grave every year on this date.

On 28 January Marie Larisch took Mary to the Hofburg for the last time. Mary was then driven to the inn Roter Stadl by Josef Bratfisch (the carriage driver who often brought Mary to her rendezvous with Rudolf). Rudolf followed shortly after and joined Mary and Bratfisch to ride onwards to Mayerling.

Rudolf’s hunting guests, Prince Philipp Coburg and Count Josef Hoyos, arrived the next day. Rudolf excused himself from the hunt and a family dinner in the Hofburg, complaining of a cold. Afterwards, Coburg returned to Vienna for the dinner, while Rudolf and Hoyos dined together. After Hoyos retired, Mary and Rudolf were entertained by Bratfisch. Gifts were exchanged and Mary said to the carriage driver that it would be the last time they would see each other. Early the next morning, the pair was discovered dead by the panicked valet, Loschek, who heard gunshots and found the door to the Crown Prince’s bedroom locked.

The half-truth of the Crown Prince’s suicide soon became known, but only after a series of announcements that initially tried to report natural causes of death.

Mary’s body was rushed out of the hunting lodge in secret. Her uncles forced a broomstick up the back of her clothes and sat with her corpse between them in a carriage. She was hastily buried at the cemetery at Heiligenkreuz. Her mother, Helene, was not allowed to visit and the memoirs in which she sought justice for her daughter were suppressed. Most of the copies which revealed Mary as a victim were confiscated by the police chief, Baron Krauss. One escaped and was printed in a French daily newspaper.

The disappearance of these memoirs and the continued refusal of the imperial family to speak the truth led to over 100 years of rumours and conspiracy theories. Although the contents of Mary’s farewell letters were suspected, their whereabouts were unknown. It was not until they were found deposited in an Austrian bank in 2015 that we gained a clearer picture of a young girl ready to enter eternity alongside the man she loved.

‘Just a few hours before my death, I want to say “adieu”’, she wrote to her sister Hanna. ‘We are both going blissfully into the uncertain beyond.’ She stated to her mother that, in agreement with Rudolf, she wished to be buried next to him. What is clear throughout her letters is that she went willingly to her fate: ‘I am happier in death than in life.’

Yet in death, Mary was not permitted her rest. Her remains were disturbed multiple times, most notably in 1992 when Helmut Flatzelsteiner stole her body from its tomb. Under the guise of finding out how an ancestor died, Flatzelsteiner had the remains examined. Gunshot wounds are visible on her skull and the bullet’s entry point is on the left. The right-handed Mary was shot by her lover.

What, then, motivated the couple’s suicide? Romantic films would have us believe it was their impossible love. This was certainly the case for Mary. Documents written by Mary reveal a young woman who felt intensely and who, months before Mayerling, said that she would die for Rudolf – ‘for what does life mean to me?’ she asked. She reveals her motive clearly to Hanna in her final letter: because she could not marry for love, she would follow Rudolf into the unknown.

Though he certainly had feelings for Mary, Rudolf’s incentives were different. His dreadful childhood, disastrous marriage and his father blocking him from political involvement had created a perfect storm. Too scared to die alone, Rudolf had already proposed a suicide pact to others, including his long-term lover, Mizzi Caspar. When she rejected him and unsuccessfully tried to alert the police, Rudolf turned to Mary, taking advantage of her feelings and youthful naivety. In doing so, he inadvertently began to turn the wheels that ultimately led to the fall of the monarchy.

Lucy Coatman is a postgraduate at Central European University, Vienna, researching the Habsburg family in the 19th and early 20th centuries.

Death in the Vienna Woods 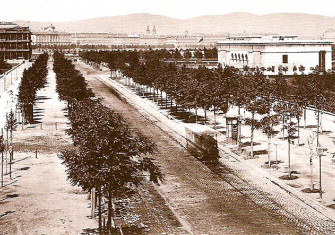