Jane Austen and the King of Skiffle

A folk favourite loved by Jane Austen and Abraham Lincoln, ‘The Irishman’ has revolutionary roots that have been forgotten.

The London Folks themselves beguile,
And think they please in a capital stile;
Yet let them ask as they cross the Street,
Of any young Virgin they happen to meet,
And I know she’ll say, from behind her Fan,
That there’s none can love like an Irishman

Copied neatly into a handwritten folio of ‘Songs and Duetts’ that Jane Austen kept on her piano is a song titled simply ‘The Irishman’. With its boastful refrain that ‘there’s none can love like an Irishman’, the piece asserts the superiority of an Irish lover by dismissing the romantic prowess of men from a range of other nationalities. Popular myth has favoured the belief that the song recalled to mind the dashing young Irish lawyer Tom Lefroy with whom Austen flirted briefly in 1795. Recent scholarship has demonstrated that this was probably not a serious relationship, but the romantic fantasy has been hard to shake off. In fact, Austen’s copy of ‘The Irishman’ could have predated her acquaintance with Lefroy altogether, since her folio is undated and the printed music from which she must have transcribed the song was first published at the start of the 1790s.

Often described as a folk song, ‘The Irishman’ was actually written for the pro-revolutionary musical The Picture of Paris, which premiered at Covent Garden Theatre in London on 20 December 1790. The play was a spirited celebration of the new National Assembly in France with a finale depicting the taking of the Federation Oath by King Louis XVI, but the French Revolution’s rapid descent into the violence and mass slaughter of the Reign of Terror meant that the musical’s buoyant republicanism was soon out of step with British popular opinion. One song from the production was destined to catch on, however: performed by the popular Irish tenor John Johnstone, ‘The Irishman’ played on stereotypes of Irish amorousness that were easily separated from the play’s revolutionary themes. A reference to the French ‘Monsieur, a slave no more’ in the second verse chimes with the original musical’s final chorus of ‘Oppression’s heavy hour is past’, but this is the only clue to the song’s pro-revolutionary setting. When ‘The Irishman’ was included in a benefit concert for Johnstone in 1794 the line had already been altered so that the French lover was simply ‘from Gallia’s shore’.

Like most of the music in The Picture of Paris, ‘The Irishman’ was the joint production of the Della Cruscan poet Robert Merry and musician William Shields, but their authorship was soon forgotten. Austen’s copy does not record this information and only a few of the printed music anthologies that reproduced the song in the 1790s bothered to identify ‘Mr Merry’ as the author. This might have been deliberate dissociation given Merry’s revolutionary sympathies: he travelled to France in 1792 where he was invited to attend the king’s trial (but declined) and was himself nearly guillotined by mistake. He remained a figure of interest to the British government upon his return. By the early 19th century the origins of ‘The Irishman’ had faded further still, but the song itself remained a regular feature of popular music anthologies and songbooks, particularly Irish folk collections such as The Hibernian Cabinet (1817) and The Sprig of Shillelah: A Collection of the Most Humorous and Popular Irish Songs (1852). There were occasional variations in lyrics – the French lover sometimes became ‘a slave once more’ – but the majority of the song remained unchanged. At the same time ‘The Irishman’ had crossed the Atlantic, where it was included in a Fourth of July musical show at the New York Theatre in 1803. Reputed to be a firm favourite of President Abraham Lincoln, ‘The Irishman’ was even quoted in a speech by future president Andrew Johnson, who described it in 1858 as ‘the first song I ever heard’.

A century later, in 1958, a new version of the song was recorded by the ‘King of Skiffle’ Lonnie Donegan, whose energetic interpretations of American folk music kickstarted the British rock ‘n’ roll movement and put guitars into the hands of young people throughout the country. But by the time the retitled ‘Nobody Loves Like an Irishman’ appeared as a flip side to Donegan’s version of the Woody Guthrie classic ‘Big Grand Coulee Dam’, the song’s theatrical origins had been forgotten. Donegan even added an extra verse and published the sheet music under his own name (a practice not unusual in the music industry at the time). The melody and other lyrics remained largely unchanged and Austen would easily have recognised the song from Donegan’s recording. But it was one of the song’s original verses that caused the BBC to immediately ban the song, since it featured a potentially offensive reference to the Quran, in which a stereotyped Turkish man is imagined praying purely for personal gain. Racial tensions in Britain were already strained in 1958. Later that same year Donegan would use his star power to combat violent racism as a member of the Stars Campaign for Interracial Friendship (SCIF). The group used concerts, interviews and celebrity-endorsed publications to counteract the racist ideology of Oswald Mosley’s fascists in the wake of the Notting Hill riots, and Donegan remained an active member of SCIF until its dissolution following Mosley’s defeat in the 1959 General Election.

Despite the BBC’s ban, Donegan’s record was a huge hit and his version of ‘The Irishman’ became one of his most popular songs in Ireland: when the Irish folk duo Foster and Allen covered the song in 2000 it was Donegan’s words and music that they used. The recent revival of ‘The Irishman’ as a souvenir of Austen’s mythical romance with Tom Lefroy has refocused attention upon its origins, but it is Donegan’s recording that preserved its place in the history of Irish folk music.

Corrina Readioff is Honorary Research Fellow at the University of Liverpool. 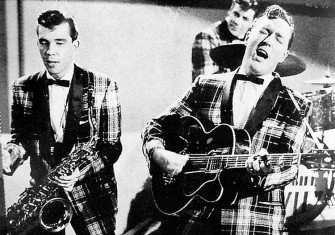 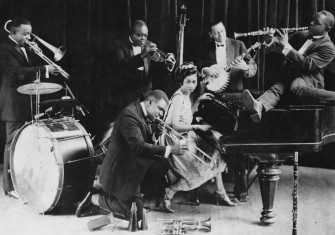