The popular image of Socrates as a man of immense moral integrity was largely the creation of his pupil Plato. If we examine evidence of his trial, argues Robin Waterfield, a different picture emerges, of a cunning politician opposed to Athenian democracy.

The great Athenian philosopher Socrates is widely lauded as one of history’s wisest men, a reputation forged by his pupil Plato.

In the course of his Apology of Socrates, Plato tells a curious story. The Apology consists of the speeches that, according to Plato, Socrates delivered at his trial in Athens in 399 BC, and at one point Socrates feels he needs to explain why he has a certain reputation for wisdom. He says that his close and impulsive friend Chaerephon once paid a visit to the Pythia, the oracle in Delphi, to ask whether Socrates was the wisest man alive. The oracle proclaimed it so.

suffer from a false conceit of wisdom.

The story has a kind of internal plausibility. It would indeed have been a life-changing event to have the oracle at the most important sacred site in Greece publicly declare that Socrates was the wisest man alive. It would have been somewhat like the Pope declaring one a candidate for future sainthood; it could well have impelled Socrates on his mission of questioning people. There’s only one snag: the story is false, a fiction created by Plato for his own purposes. 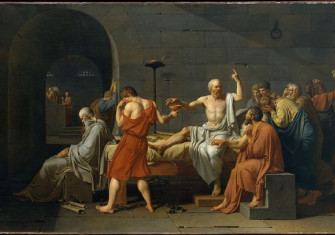 Was Socrates A Democrat?