Travelling the world with the diaspora, jerk is an artefact of Jamaica’s troubled colonial history and a powerful testament to the island’s centuries-long quest for freedom. 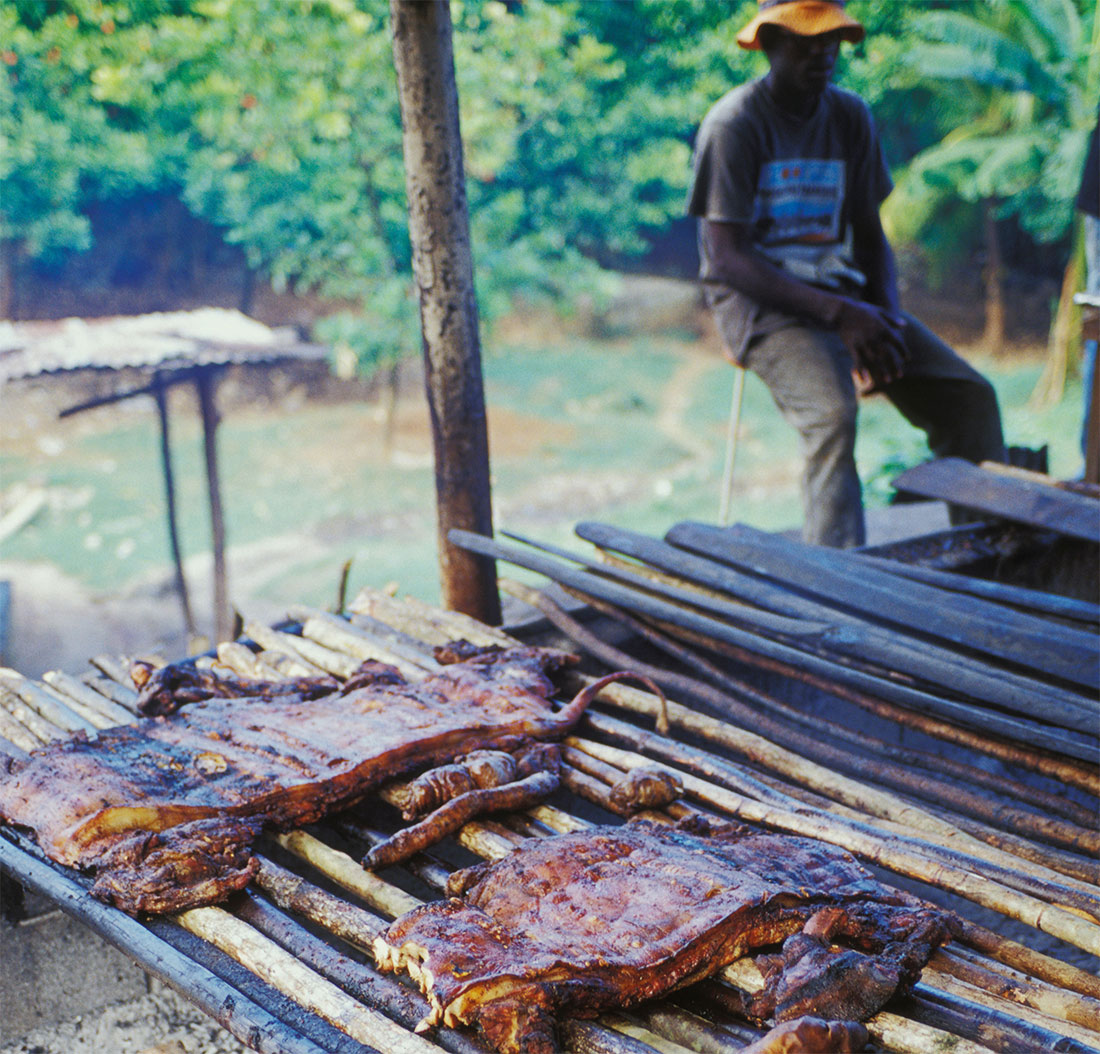 People don’t come to Boston Beach – on Jamaica’s north-eastern coast – just for the waves lapping at the sand, or the palm trees swaying in the breeze. What really draws them in is the jerk. Lining the road to nearby Fairy Hill are countless stalls cooking great slabs of chicken, pork or fish on homemade grills made from old oil cans. Part of what makes it so special is the flavour. Unlike in many other parts of Jamaica, the stallholders here have no time for sauces or marinades. Instead, they season the meat liberally with allspice and Scotch bonnets and grill it slowly over a glowing bed of pimento wood, sometimes for as long as six hours. This not only makes it uncommonly succulent, but also amazingly smoky and hot. Much more important, however, is the link with the past. Though none of the stalls in Boston Beach are more than a few decades old, the recipe they use has remained virtually unchanged for almost 150 years. Handed down from generation to generation, it is not only an artefact of Jamaica’s troubled colonial history – but also a powerful testament to the island’s centuries-long quest for freedom.

Like many other foods, jerk’s origins are shrouded in mystery; but most scholars agree that it was a product of slavery. When the British conquered Jamaica in 1655, the Spanish settlers abandoned their properties and set most of their African slaves free. Escaping into the interior, these slaves took refuge in the densely forested Blue Mountains, where they soon formed loose, heterogeneous communities with other runaways and the indigenous Taínos. For the next seven decades, these ‘Maroons’ – as they became known – waged a guerrilla war against the British, sweeping down from the hills to raid towns and villages and terrorise local garrisons.

Amid the cloud-topped peaks, the Maroons eked out a precarious existence. The shallow mountain soils allowed for little more than subsistence farming; and, while raids on plantations sometimes yielded much-needed supplies, they were hardly a reliable source of food. Many therefore fell back on hunting wild pigs. Most likely brought over from South America by the Taínos’ ancestors, they roamed the slopes in abundance. They were, moreover, unusually fine quality. As the British cartographer Richard Blome observed in 1672, ‘Jamaican pigs were far better tasting, more nourishing, and much easier to be digested [sic] than those of Europe.’ Once killed, they were prepared using a method which the Maroons had probably learned from the Taínos. According to the Irish naturalist, Hans Sloane, the hogs were ‘cut open, the bones taken out, and the flesh … gash’d on the inside into the skin, fill’d with salt and expos’d to the sun, which is called jirking’. Bird pepper – which grew wild in the hills – was sometimes used, as well. Though somewhat peculiar to modern eyes, this method was particularly well adapted to the itinerant Maroons’ needs. It was simple, let nothing go to waste and it was discreet. Given that no fire was needed, there was little risk of attracting the attention of British patrols. Best of all, the end product was uncommonly tasty. Sloane thought it like ‘bacon, if broil’d on coals’; but it was probably closer to what we now call jerky.

How it acquired the name ‘jerk’ is unclear. Most likely is that it came from the Quechua word ch’arki. Used throughout South America to describe a sort of dried meat, this had been preserved in the speech of the Taínos and later rendered into Spanish by the Maroons as charqui or charque. With the slow penetration of English, this ultimately became jirk or jerk.

In the late 17th century, the British found themselves increasingly on the back foot. To provide labour for the rapidly growing sugar plantations, the colonists began bringing in ever larger numbers of slaves from Africa. Among these were big populations of Fante and Coromantees – warlike and highly militarised peoples from the Ashanti Empire in modern Ghana. Encouraged by the success of Maroon raids, these warriors soon rose in rebellion. Establishing themselves in the eastern (or Windward) parts of the interior, they formed some of the best organised and most durable Maroon societies. Already heavily outnumbered, and further weakened by the Civil War at home, the British were unable to hold anything but a narrow strip of land along the coast. After a series of humiliating setbacks, they were grudgingly obliged to accept Maroon control of the Blue Mountains.

In 1728, however, British policy changed. No longer willing to tolerate the threat to trade, the government sent a fresh army to reassert control of the island – sparking what would become known as the First Maroon War. The British strategy was founded on separating the main groups – now known as the Windward and Leeward Maroons – and then picking off the weaker and less well-organised Windward Maroon groups. But the Maroons proved surprisingly resilient. Under the leadership of ‘Nanny’ – a remarkable Ashanti woman – a stronger Windward society had formed, which succeeded in forcing a stalemate.

Exhausted, the British agreed to terms. In 1739, the governor, Edward Trelawny, signed a treaty with the Leeward Maroons, granting them a fair amount of land on the same terms as colonists and a degree of political autonomy. In return, they undertook to fight for the British whenever called upon, and – crucially – to return runaway slaves for money. Although a further treaty was signed with the Windward Maroons the following year, this created huge tensions, and a second, even bloodier, war erupted, which ended in 1796.

The peace which followed occasioned a dramatic shift in the character not only of Maroon society, but also of jerk. No longer obliged to hide, the Maroons increasingly settled down; and now that the opportunities for making money by hunting slaves had largely disappeared, they turned to more settled forms of economic activity. Many – especially those Leeward Maroons who had established palenques (farmsteads) – became commercial farmers. For others, jerk now became their principal source of income. 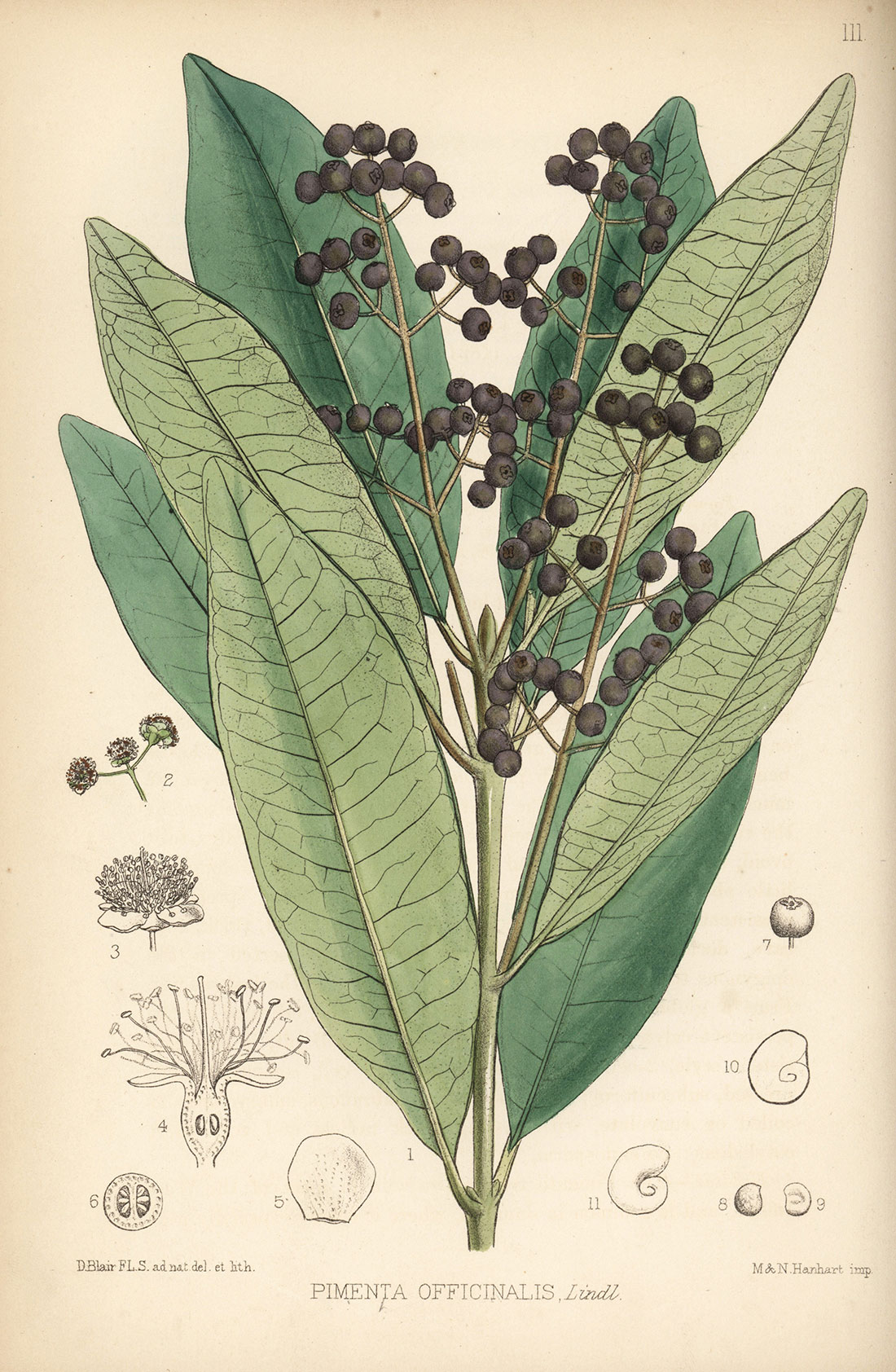 According to the planter John Stewart, the Maroons had come to hunt wild pigs ‘with dogs’ which kept them ‘at bay while the huntsmen [took] aim at [them] with their guns’. Once felled, the hogs were then gutted and the flesh prepared using a new technique. With the Maroons no longer having  to look over their shoulders, as it were, they were able to use fire and place a higher premium on succulence. The seasoning had also changed. Flavour – rather than preservative value – was now their principal concern, with bird pepper and salt being edged out by Scotch bonnets and allspice. As the Gothic novelist Matthew ‘Monk’ Lewis reported, the flesh was first dressed and then:

placed on a barbecue (a frame of wicker-work, through whose interstices the steam can ascend), filled with peppers and spices of the highest flavour, wrapped in plantain leaves, and then buried in a hole filled with hot stones, by whose vapour it is baked, no particle of the juice being thus suffered to evaporate.

Once cooked, the meat was removed, allowed to cool and taken into the towns for sale.

By the mid-19th century, jerk sellers had become a common sight. A striking portrait was provided by the naturalist Philip Henry Gosse, who would later become notorious for claiming that fossils were a lie. The jerk seller, Gosse wrote, was generally:

armed with a fowling piece and cutlass, and belts that suspended on one side a large plaited bag, known as a cuttacoo, and on the other a calabash, guarded with a netted covering, in which he carried his supply of water. On his back, braced round his shoulders, and suspended by a bandage over the forehead, was generally seen the wicker cradle, that help inclosed [sic] a side of jerked hog, which he sold passing along, in measured slices, to ready customers, as an especial delicacy for the breakfast table.

Jerk sellers were, however, not to last. As plantations expanded and the island’s economy diversified, the Maroons increasingly left the mountains to pursue a new life in coastal regions, such as Boston Beach – and took jerk with them. Though some continued to sell meat on the streets, it gradually became less of a Maroon preserve. Towards the end of the 19th century, even the British Army started cooking it. Except in certain areas, which clung doggedly to the ‘old’ ways, the recipe had begun to change, as well. Instead of burying the meat – which town-dwellers soon found impractical – the meat came to be suspended on a ‘gridiron’ raised about two feet above a charcoal fire. Scotch bonnets became the dominant ingredient; and, to accommodate non-Maroon tastes, onions, scallion, ginger, wild cinnamon, nutmeg and thyme were also introduced, albeit irregularly.

Jerk’s popularity was cut short by trade. Following the appearance of American bacon on the Jamaican market in the early 20th century, many people abandoned their traditional ‘wild’ pork for the Yankee novelty; and for a time, jerk was almost forgotten.

From the 1930s onwards, however, it enjoyed something of a renaissance. Due partly to the emergence of Rastafarianism and partly to the development of a more acute sense of Jamaican cultural consciousness, a growing effort was made to recover and reclaim Maroon culture – including its cuisine. As such, jerk became identified not only with Jamaican national identity, but also with a rejection of colonial oppression. The recipe, of course, had to change, particularly among Rastafari. Due to the prohibition on eating pork and to the greater availability of alternatives, chicken and fish were used instead, while the avoidance of salt may have led to the growing predominance of marinades and sauces.

Following independence, the Jamaican diaspora was to take jerk around the world. Putting down particularly deep roots in Britain and America, it was soon to become as much a favourite in Handsworth, Brooklyn and Notting Hill as it was in Kingston. New ingredients were added to reflect local diets; and, especially in recent years, ever more inventive versions have begun to appear. Yet it still remains a powerful culinary monument to Jamaica’s past – and, especially in Boston Beach, an authentic taste of liberty.