A History of Salt Cod

The Portuguese national dish with a global past of ingenuity and exploitation. 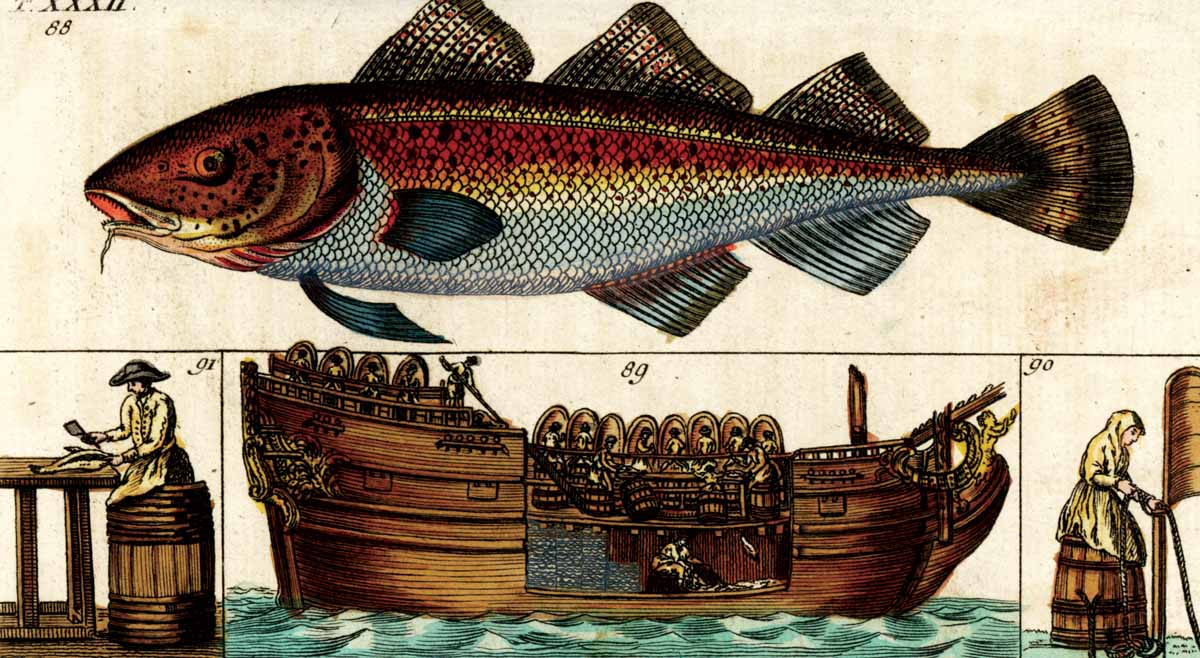 Just below the church of São Francisco – not far from the Maria Pia bridge – Porto’s medieval walls descend from the hills and run along the banks of the River Douro. Known locally as the muro dos bacalhoeiros (wall of the cod-fishers), this short, salt flecked stretch is bounded by the quays where, in centuries gone by, fishing boats docked on their return from the North Atlantic. For almost 600 years, sailors bustled hither and thither, unloading cargoes of salted cod, merchants haggled over prices and stallholders sliced up the freshly arrived fish for eager customers, using the guillotine-like blades attached to their benches. Today, the quays may be quieter, but salt cod (bacalhau) is a no less conspicuous presence.

A culinary embodiment of Porto’s maritime past, it can be found for sale in countless shop windows along the riverfront, and dominates the menus of restaurants perched atop the walls.

Often said to be Portugal’s national dish, the bacalhau here is prepared in many different ways. It can be stewed with cream and potatoes (bacalhau com natas), baked into balls (bolinhos de bacalhau), or even cooked into a comforting casserole with eggs, olives and onion (bacalhau à Gomes de Sá). But, however you take your salt cod, its rich flavours conceal an even richer history. Reaching from Norway to Newfoundland and from the Arctic to Africa, it is a tale populated by Vikings and Basques, colonists, traders and explorers – and haunted by the spectre of slavery and extinction.

The Atlantic Cod (Gadus morhua) – from which virtually all salt cod is made – is a remarkable beast. Measuring up to 1.2m long and weighing as much as 40kg, it roams the icy waters of the North Atlantic, from Cape Hatteras to Greenland and from Iceland to the Barents Sea, with an almost aristocratic assurance. Like the haddock, it is perfect for human consumption. Its white flesh is dense, flaky and low in fat; its bones are easy to separate; and, while it is most often caught using nets, it can be landed with nothing more than a baited line.

Fishermen on both sides of the Atlantic have been eating cod since the earliest times. Recent archaeological research has revealed that it was an important part of the Native Americans’ diet; and it is probable that it was caught in Scandinavia’s coastal waters before historical records begin. But the practice of preserving cod is much more recent.

Most likely, it began in the late eighth or early ninth century, when Viking shipbuilders began constructing the first craft with keels. Graceful, elegant and able to cut through rough swells with ease, these early longships allowed the Vikings to roam further than they had ever done before. But if they were going to make the most of this opportunity, they needed some way of feeding themselves during their long journeys. Cod offered the ideal solution. Though the Vikings were happy enough to catch it en route when they could, they preferred to preserve it before they set out and lay it in store, to be safe. After hauling the cod out of the water, they would slice it open, remove its spine and innards and dry it in the open air – sometimes on wooden racks, but more often on the rocks by the shore. With just 15-20 per cent water content, the resulting ‘stockfish’ was durable – and as its name may suggest, hard as wood (stokfisk in West Frisian means ‘stick-fish’).

The first evidence of stockfish is found in Egil’s Saga, of which the oldest surviving manuscript dates to c.1240. It reports that in 875, Thorfold Kveldufsson brought a supply of stockfish to Iceland from Heldeland in central Norway. It is also said that Leif Erikson took a supply with him to Newfoundland in c.1001. But stockfish did not remain a Viking preserve for long. At about the time of Leif’s journey, it was adopted by the Basques, whose prowess as a seafaring people was to become no less pronounced than that of the Vikings. Thanks to them, it was soon introduced to other seafaring peoples throughout Europe, including the English, the Portuguese and the Neapolitans. 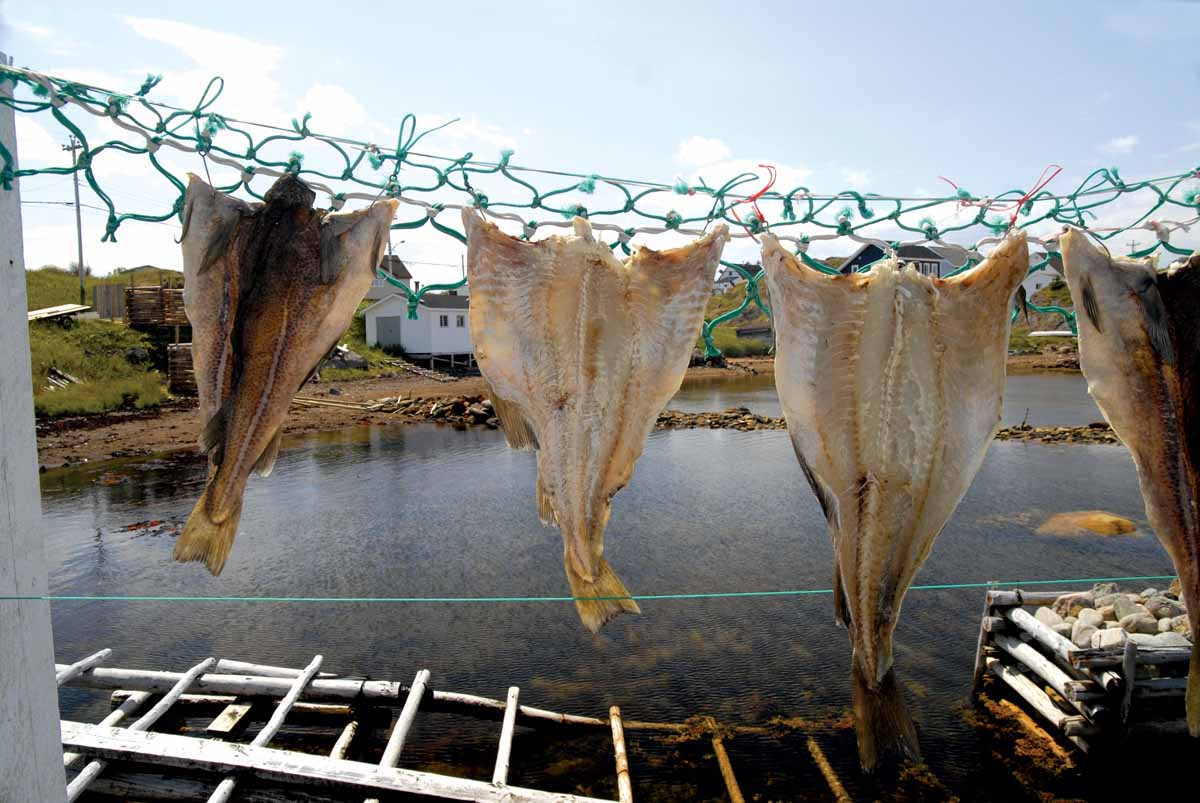 Stockfish required careful preparation. Before it could be cooked, it had to be soaked in water for just long enough. Too long and it would become soggy; not long enough and it would be like shoe leather. But it was nevertheless highly versatile and could be cooked into any number of delicious recipes, from simple stews to lutefisk, still a Scandinavian classic. And the more non-Nordic sailors began to appreciate its merits, the more diverse the dishes became. After being shipwrecked on the island of Røst in 1432, for example, the Venetian captain Pietro Querini is said to have popularised a version of what was later to become known as baccalà alla vicentina. If stockfish’s initial popularity was due to its suitability for long voyages, however, it owed its lasting fame to the Christian calendar. Throughout the pre-modern period, the Christian calendar was peppered with fasts, on which no meat could be consumed. Though in coastal regions fresh fish could be counted upon, this was not true elsewhere. Stockfish offered an alternative. Easy to keep, cheap to buy and delicious to eat, it ensured everyone could be sure of something tasty for dinner, no matter what.

It was only with John Cabot’s (re-)discovery of Newfoundland in 1497 that salt cod made its appearance. On reaching the coast of North America, Cabot gained access to the richest and most plentiful supply of Atlantic cod on the planet. Given the huge popularity of stockfish in Europe, he and his contemporaries quickly realised the enormous profits to be made from exploiting this resource. There was only one problem: while it was easy enough to dry cod in the arid air of Scandinavia, the muggy climate of Newfoundland made such a practice impossible. The only solution was to salt it before drying it.

After a catch was made, ships would put into shore and prepare the fish in much the same way as before. Once the cod had been gutted, slices of flesh were packed between layers of salt in barrels. This reduced the water content to around 60 per cent. After a suitable period, the fish was then removed and dried as much as possible, to bring the water content down even further, to about 40 per cent. This was enough to last a long Atlantic voyage and it produced a more versatile product, lapped up by European markets. It was especially popular in the Iberian peninsula, where its name bacalhau (in Portuguese) or bacalao (in Spanish) was taken from the Dutch kabeljauw, itself derived – somewhat awkwardly – from the French word for fresh cod (cabaillaud). But it was also eagerly consumed by the Italians and the Dalmatians, some of whom – rather confusingly – used the same word (baccalà) for both salt-cod and stockfish.

Little more than a century later, salt cod had became one of the mainstays of Atlantic trade. By 1660, English fishermen were salting no fewer than 150 shiploads each year for the European market. Buoyed by demand, fishing stations were established along the New England coast. In less than ten years, settlers founded more than half a dozen different ‘cod’ settlements in Massachusetts alone. And the money came rolling in.

But it was sugar which transformed salt cod from a valuable commodity into an economic sensation. By the late 17th century, much of the Caribbean had been given over to sugar production. The cane was grown on large plantations and was notoriously labour-intensive to grow. To keep costs down, plantation owners relied increasingly on slaves, brought over from West Africa. But there was a problem: in order to grow enough food to sustain large numbers of slaves, plantation owners would have to devote great swathes of their land to crops or animals – which they were unwilling to do. Their solution was to give the slaves salt cod instead.

The New England fishermen could hardly believe their luck. Although salt cod was relatively easy to produce, the salting and drying process could go wrong in any one of a number of ways. Since Europeans had become rather particular about the quality of their salt cod, defective produce had previously been thrown away. But plantation owners weren’t so picky. Concerned only to feed their slaves cheaply, they would take whatever the New Englanders could supply – provided the price was right. This meant that the New Englanders could turn waste into profit – and a profitable new trade was born. Before long, producers abandoned European markets to concentrate on making low-grade salt cod for the Caribbean.

This was only the beginning. It did not take producers long to realise that, if they were going to send ships laden with salt cod to the Caribbean, they may as well reinvest their profits in valuable Caribbean products they could sell back in New England. By the 1640s, captains were coming back with holds full of salt, sugar, indigo, cotton, even tobacco. But the real money was in slaves. New England ships would cross the Atlantic, buy slaves in the Cape Verde islands or West Africa, sell them in the Caribbean, then take cargo-loads of spices and fibres back to New England. They would then return with the salt cod needed to feed the slaves they had sold earlier and the whole process would begin again. It was a classic case of market-making and it delivered huge profits – especially after 1713, when the development of the schooner, a faster, sleeker ship, cut travel times dramatically. By the early 18th century, cod was so central to the economy of New England that Boston Town Hall even had a golden cod hanging from its ceiling.

The suspension of the Atlantic slave trade and the ultimate abolition of slavery brought an end to the trade, but salt cod continued to flourish. It remained popular in Scandinavia, in Spain and in the Caribbean – surviving in dishes such as bacalaitos (Puerto Rico) and ackee and saltfish (Jamaica). It also continued to be a favourite of diners in Italy, especially in the Veneto, gaining a particular following among the poorer sections of society. Even in the late 19th century, shops in poorer quarters of towns in the Veneto would hang out signs every Thursday reading: Domani baccalà e ceci (Tomorrow salt cod and chickpeas). In the south of France, around Nîmes, poor salt-workers who traded sacks of their produce for dried cod developed brandade de morue, a delicious emulsion made with olive oil, garlic, lemon juice and herbs. In Portugal, it became an object of almost religious veneration.

The appearance of steam trawlers in the early 20th century encouraged the consumption of salt cod further. But the writing was on the wall. When large-scale commercial freezers burst onto the scene after the Second World War, the need to salt cod evaporated – and huge quantities of frozen cod were now shipped to eager consumers on both sides of the Atlantic. The consequences were devastating. By the 1990s, cod had been fished almost to the point of extinction. Yet, if quotas are enforced, there is still hope that stocks may recover – and that salt cod will be enjoyed along Porto’s muros dos bacalhoeiros for generations to come. 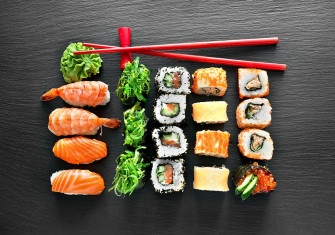 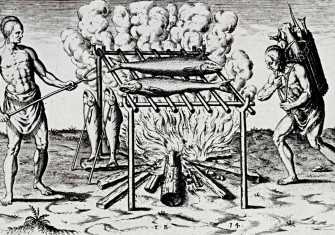