Henry II was fatally injured by the Count of Montgomery during a jousting tournament. He died on July 10th, 1559. 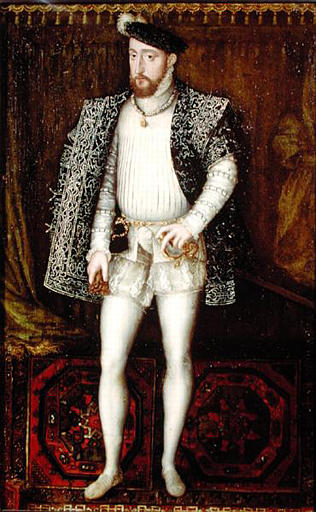 Born in 1519, the future Henry II married Catherine de Medici in 1533 when they were both 14 years old. His father, King Francis I, reportedly supervised the consummation, announcing they had both shown valour in the ‘joust’. Catherine was rich but not pretty and Henry was soon in the arms of Diane de Poitiers, a beautiful, ambitious widow in her mid-thirties who became almost a queen behind the scenes. Henry had other mistresses but his two other great loves were hunting and jousting. He succeeded his father to the French throne on his 28th birthday in 1547 and in 1558 his and Catherine’s eldest son, the stunted and sickly Francis, was married to Mary, Queen of Scots, who had been brought up in France by her mother’s family, the Guises, to keep her out of the hands of the English. The French intended through her to acquire the Scottish throne.

In June 1559 a tournament lasting several days was held in Paris to celebrate a peace treaty between France and Spain. King Henry was to enter the lists before a glittering audience of lords and ladies, including Queen Catherine, Diane de Poitiers and Mary, Queen of Scots. Henry had started suffering giddiness after physical exertion and Catherine tried to persuade him not to joust. Yet he acquitted himself well, sporting Diane’s colours as usual, until the young Count of Montgomery, of his Scottish Guard, almost unseated him. Queen Catherine, the Duke of Savoy and other friends tried to persuade the king to leave the lists, as the day was virtually over. Henry, however, insisted on another contest with Montgomery, who did his best to refuse. Montgomery’s lance struck the king’s helmet and a long splinter pierced Henry’s eye and penetrated his brain.

The king reeled in his saddle and gentlemen close by rushed to help him off his horse and out of his armour. Bleeding profusely and almost unconscious, he was carried to his apartments in the Château des Tournelles. Sir Nicholas Throckmorton, the English ambassador, who was watching, wrote: ‘I noted him to be very weak, and to have the sense of all his limbs almost benumbed, for being carried away, as he lay all along, he moved neither hand nor foot, but lay as one amazed.’

Montgomery hurried to kneel before the king and asked to have his head and hand cut off in punishment, but Henry magnanimously told him that it was not his fault and he had carried himself bravely and well. The royal doctors removed the splinter from the king’s eye and others that had pierced his head and throat and bled the patient who relapsed into unconsciousness. It was hoped that the loss of the eye was the worst that would happen, but even though the royal surgeon, Ambroise Paré, was joined by another celebrated medical man, Andreas Vesalius, sent from Brussels by King Philip of Spain, Henry’s condition grew worse.

Catherine took command, kept watch by her husband’s bedside and refused to allow Diane de Poitiers into the room. On July 9th the last rites were administered and the king died early in the afternoon of the following day. He was 40 years old.

Diane de Poiters was banished from court and ordered to return all the jewels Henry had given her. Montgomery prudently retired to his estate in Normandy. He became a Protestant and in time Catherine de Medici, who hated him, would take the opportunity to have him beheaded in 1574. Meanwhile, the new king was her 15-year-old son Francis II, husband of Mary, but he died within 12 months, in 1560, to be succeeded by his younger brother the 10-year-old Charles IX. Mary, her potential usefulness to the House of Valois at an end, was no longer welcome and left for Scotland in 1561. Catherine said of Charles: ‘After God, he recognised no one but me.’ He lasted until 1574 and was succeeded by yet another brother, Henry III. With her sons on the throne and by now having a shrewd know-ledge of the court, Catherine took the opportunity to become the dominant figure in the tumultuous French politics of the time, almost until her death in 1589.