Genes‘R’Us: Science and Ideology in the Lysenko Controversies

The debate over whether nature or nurture guides who we are is as dependent on politics and ideology as it is on scientific research.

Like many wealthy Americans in the first half of the 20th century, the self-made entrepreneur Roger Babson believed fervently in the power of genes. There are only three important days in a person’s life, he preached: when they choose their ancestors, their career and their spouse. Tracing his own heritage back to the arrival of the Mayflower, Babson consolidated his English origins as well as his fortune by applying Newtonian laws of action and reaction to the stock market. He even planted a descendant of Newton’s apple tree in the grounds of the Massachusetts business college that he founded in 1919.

Such genetic determinism was anathema to many of Babson’s European contemporaries: science supposedly knows no borders, yet for decades biological conviction was tied to political alignment. Especially in the USSR, socialist scientists rejected any notion of genetic destiny or divine direction, arguing instead for the importance of environmental influences. Human progress demanded revolutionary endeavour, a view eloquently articulated by the Austrian scientist Paul Kammerer in a 1924 publication:

We are not slaves of the past – slaves helplessly endeavouring to free ourselves of our shackles – but also captains of our future, who in the course of time will be able to rid ourselves … of our heavy burdens and to ascend into higher and ever higher strata and development.

Although British and American futurologists shared Kammerer’s optimism, their own quest for improvement involved picking apart the body’s molecular secrets and untangling the twisted strands of DNA. This line of research did indeed prove capable of loosening Kammerer’s shackles. Modern genetic engineers can alter crops, prevent lifelong illnesses and manufacture therapeutic drugs, while technologists are enhancing individual lives by equipping human beings with digital devices such as brain-controlled prosthetic limbs or cochlear implants.

But the USSR embarked on a different route to the future. When Joseph Stalin came to power in 1924, scientists everywhere mostly believed in some sort of evolution, but there was no consensus on why an offspring should differ from its parents – an essential alteration if giraffe necks were to grow longer or a fish’s fins were eventually to become feet. Even Charles Darwin was mystified: he knew nothing of genes, but did suggest that parents might be able to pass on their personal lifetime adaptations to allow acquired characteristics to be inherited. It was not until the mid 1930s that several lines of research fused together and a new form of Darwinian natural selection, reliant on genetic shifts, emerged.

Before then, for experimenters in the USSR it made scientific as well as political sense to argue against genetics. During the horrendous winter of 1932-33, a provincial agriculturalist called Trofim Lysenko (1898-1976) claimed to have shown experimentally that he could dramatically increase wheat yields by subjecting seeds to a special freezing process. This solution to food shortages was immensely appealing and, as Stalin’s protégé, Lysenko was soon put in charge of the USSR’s agricultural policies. Critical geneticists were transported to Siberia while crops failed, cattle died and people starved. Even so, Lysenko remained influential until 1964, when his supporter Nikita Khrushchev fell from power.

A Stalinist hero, Lysenko was internationally condemned as a charlatan, a fraudster responsible for the death of millions. But that black-and-white story is too simplistic: his reputation continues to be reappraised.

From outsider to insider

For over ten years, the American historian Loren Graham tried but failed to interview Lysenko. Eventually, in 1971, he accidentally encountered his quarry in the luxurious dining room of Moscow’s House of Scientists. Eating alone, Lysenko cut a solitary figure. As Graham recounts in his book Lysenko’s Ghost, he provoked his subject into angry self-justification: ‘You think I am a part of the Soviet oppressive system. But I have always been an outsider … I had to fight to be recognised.’

Lysenko took advantage of the political regime to manoeuvre himself to the centre of state power. The son of Ukrainian peasants, he grew up far away from the metropolitan centres of Moscow and Leningrad. Instead of studying laboratory science in an elite university, he worked at the Kyiv Agricultural Institute, where he was interested in practical matters of crop improvement rather than theoretical questions about genes and molecules. Lysenko may well have been justified in feeling excluded by more conventional academics with their privileged backgrounds, but he also found it advantageous to stress his proletarian roots and denounce his rivals as aristocratic traitors to the communist cause. Although never a signed-up member of the Party, Lysenko was deeply enmeshed in its rule and had no qualms about sacrificing colleagues to protect his own interests.

Lysenko’s initial fame rested on developing the pre-existing technique of ‘vernalisation’, which entailed transforming winter grain into spring grain by freezing it in a moist environment. In 1929 his father had followed Lysenko’s instructions for spring planting and, according to Pravda, obtained a yield three times higher than usual. Amid intense interest, further trials were ordered and the programme expanded even though there were few definite reports of success. In the chaos of collectivisation, excuses were readily available – the peasants had failed to carry out instructions properly, or the questionnaires had not been fully completed, or the procedure would be more effective in the frozen north.

Resolutely denying the significance of genes, Lysenko developed various agricultural techniques that he insisted would yield more food and also engage Russia’s peasants in productive labour. His central idea was to improve plant development by manipulating the surrounding environment, a concept that had some theoretical validity but was hard to achieve practically. With disastrous results, he extended this principle to cattle, claiming that they would produce more milk if they were treated with kindness.

For Stalin and other government leaders, Lysenko represented an ideal candidate in their search for young provincial practitioners who could persuade the peasant population to work hard and promote the Soviet social experiment. Lysenko’s critics soon began to multiply, but they disagreed among themselves and mostly judged it politic to lie low. With Stalin’s encouragement Lysenko clambered ever upwards, becoming President of the Leningrad Academy of Agricultural Science in 1938. From then on, he was effectively in charge of the Soviet Union’s agricultural policies, but he left countless casualties lying in his wake – not only millions of starving peasants in the USSR and China, but also many outspoken scientific opponents. These included his one-time ally Vavilov, who mysteriously disappeared in 1940 and died in Siberia three years later, supposedly while attempting to breed frost-free plants.

In 1948, to the horror of scientists all round the world, the government declared that genetic experimentation was banned and that Lysenkoism would be the official doctrine. For the moment, Stalin and Lysenko had definitively won their battle against the geneticists.

Nobody had ever seen a gene, so to deny their existence was not totally irrational. The search for a material entity, a molecular building block, ended only in 1953 when the structure of the double helix was revealed. Stalin died in the same year and Lysenko’s influence plummeted. Looking back over the preceding decades, western scientists found it easy to denounce Lysenko as a scurrilous pseudo-scientist who had conned his way into power and devastated the Soviet Union’s agricultural system while ruthlessly condemning his critics to exile and death in distant concentration camps.

These prolonged debates were fuelled by political ideologies as well as scientific facts, and the situation was far less clear cut than it might appear. Lysenko could not have succeeded alone: he thrived in a regime determined to prioritise policy over data. In addition, from a Marxist perspective, western science was not squeaky clean. In 1949, a distinguished Soviet biologist published a savage indictment in a popular weekly journal that – with some justification – accused geneticists of racism and financial corruption. Boris Efimov’s caricatures ensured that everybody easily got the point. On the left, an evil-looking microscopist with a Nazi pamphlet sticking out of his pocket is searching for the genetic inheritance that will condemn to death anyone of Jewish descent. On the right, a fat American capitalist clutches the reins controlling a bunch of puny scientists who declare themselves to be independent by waving ‘The Banner of Pure Science’ – the large dollar sign reveals the true price of loyalty. And at the bottom, a Ku Klux Klan vigilante brandishes his baton alongside a geneticist clutching a hypodermic sterilising needle: the triplets of racism, science and the state are marching along arm in arm.

However exaggerated Efimov’s drawings might seem, the consequences of tying together genes and heredity have been subjected to ever-closer scrutiny. Adolf Hitler was far from being the only government leader to embrace eugenics, the bid to improve humanity through techniques of selective reproduction. In 1910, Winston Churchill wrote to Britain’s prime minister, Herbert Asquith, warning him that ‘the unnatural and increasingly rapid growth of Feeble-minded and Insane classes … is a danger to the race’. He recommended elimination at source, and Churchill’s Mental Deficiency Act remained in force until 1959. In the US, the last of 80,000 sterilisations took place as late as 1981.

One of Britain’s leading Darwinists, R.A. Fisher, used to be celebrated for consolidating evolutionary theory with statistics, but is now condemned as a hard-line eugenicist who wanted to strengthen the nation’s stock by preventing supposedly sub-standard genes from being passed on. Paradoxically, it now seems that the molecular lines of enquiry he endorsed may eventually culminate in the opposite conclusion – that we are not just the biological sum of our genes. The evidence is piling up to suggest that any one individual’s adaptation to lifetime experiences such as parental care or food deprivation may be chemically passed down to subsequent generations.

Obviously, even identical twins will behave differently if they are brought up apart, but the new science of epigenetics raises the far more radical possibility that those differences might be inherited. How you behave depends not only on which genes you are made up from, but on how these genes are expressed – how they can be switched on and off, how they can be chemically interpreted to produce varying effects. Lysenko was slated for talking gently to his cows, but laboratory experiments with many generations of rats imply that being reared with love might indeed lead to inheritable alterations. Although similar trials are impossible to carry out on humans, some historical episodes do provide unfortunate substitutes. In the Second World War many people endured severe famine during the Dutch Hongerwinter of 1944-45 and close analysis of surviving data suggests the existence of an effect that skips one generation: the grandchildren of women who were pregnant while on the verge of starvation apparently have a higher than normal incidence of problems such as obesity, diabetes and heart disease.

Even though not all the indications of epigenetic research can yet be classed as conclusive, opportunists all over the world have been generating sensational and misleading headlines about its frightening potential for controlling the future direction of the human race. In Russia, which is once again governed by an absolutist regime, the scaremongering has taken a somewhat different line: the origins and tenets of epigenetics are being twisted to revive support for Lysenkoism and Stalinism as well as for Russian Orthodox brands of anti-Darwinian creationism.

The focus of scientific research is also being affected. Russian geneticists might be able to consolidate the Dutch conclusion that starvation’s consequences are passed down by analysing survivor statistics from the siege of Leningrad, which caused by far the most extensive war famine. Yet, reluctant to fan neo-Lysenkoism, they are steering clear of this opportunity to explore epigenetics.

Patricia Fara is an Emeritus Fellow of Clare College, Cambridge. Her most recent book is Life after Gravity: The London Career of Isaac Newton (2021). 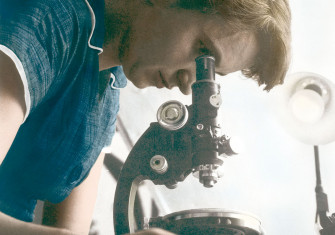