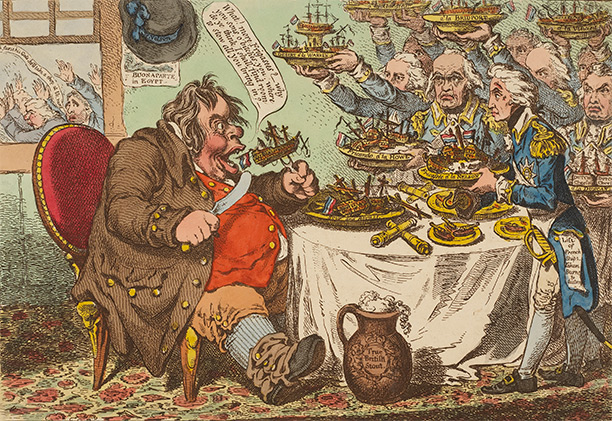 The caricature reproduced here, drawn in 1798 by the mighty James Gillray, shows the archetypal Englishman ‘John Bull’ bellyaching because he is being forced to eat countless captured French ships, served to him as ‘fricassées’ by Nelson and his victorious admirals. (Suspicions about foreign food are nothing new.) In the background the Whig grandees Charles James Fox (1749-1806) and Richard Brinsley Sheridan (1751-1816), early supporters of the French Revolution, flee with hands raised, fearing they will be served up for consumption next.

Gillray recognised a fundamental truth about the Brit, which is that he will always find something to moan about. His John Bull – or ‘Old Grumble Gizzard’ – is a different character from the figure he was to become in the ‘respectable’ Victorian age. In the pages of genteel Punch and in insipid satires elsewhere the John Bull of 19th-century cartoonists such as John Leech was a genial, avuncular figure, who embodied the best characteristics of a stalwart nation. Gillray’s generation knew rather better.