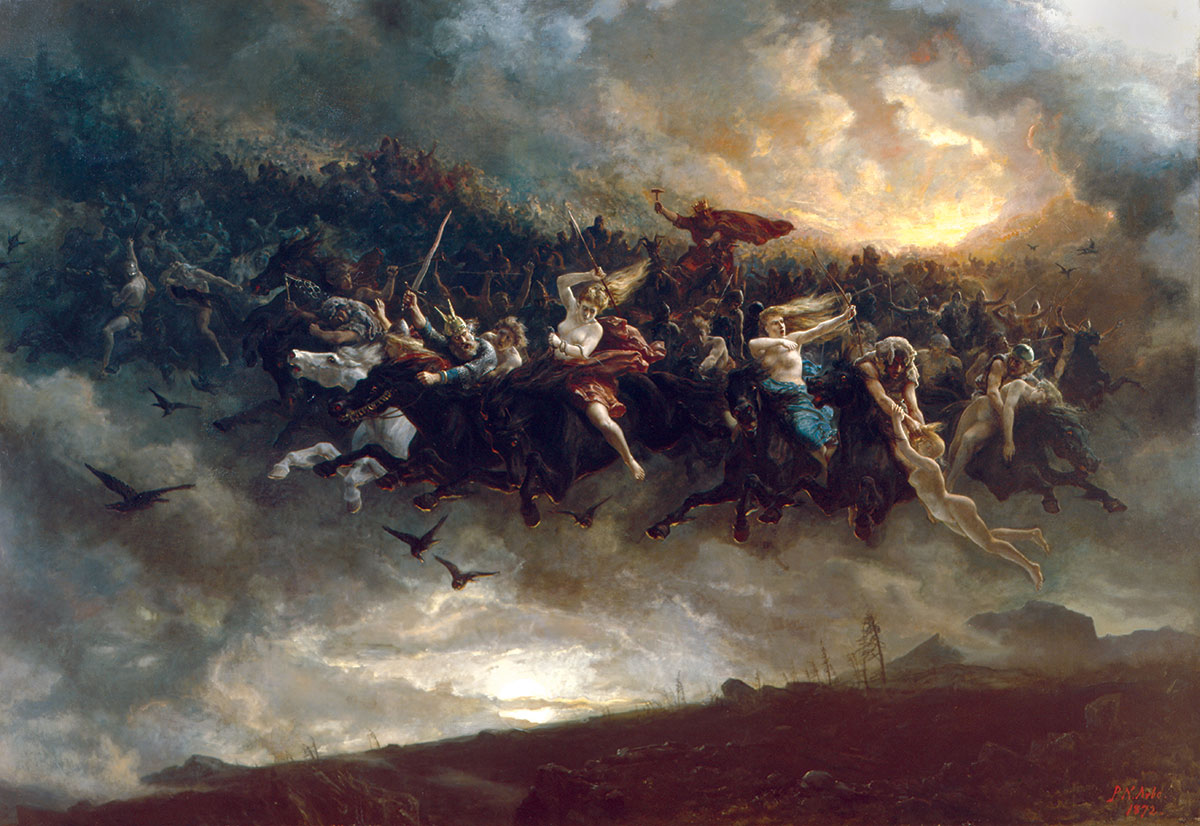 A chaotic, menacing assembly of gods and trolls and restless souls.

Odin (Woden, or Wotan), the principal pre-Christian deity of the Germanic peoples and the Norse god of the wind and the dead, raises a sword in command of his Wild Hunt across the midwinter sky.  Among the other figures in the procession is Thor, son of Odin and the god of thunder, holding a hammer aloft, his cape billowing as he rides a chariot pulled by two goats.

Accompanied by Odin’s ravens, the menacing throng ‘sweep through forest and air in whole companies with a horrible din’, all in search of mortals who, having failed to find a hiding place from the celestial hunting party, are abducted as prey and taken to the underworld. The arrival of the Wild Hunt was thought to herald catastrophes, such as war, plague or famine, and presaged the death of anyone who witnessed it.

This painting, by the Norwegian artist Peter Nicolai Arbo, was painted in Paris in 1872, inspired by Asgaardreien, a work by Arbo’s fellow countryman, the Romantic poet Johan Sebastian Welhaven. The poem’s opening lines set the scene: ‘Through the nightly air stampedes a train of frothing black horses.’

The concept of the Wild Hunt of Odin was first named and recorded in German Mythologies, compiled by Jacob Grimm, one half of the German brothers celebrated for their collections of Teutonic folklore, and published in 1835.

Versions of the myth are found in many parts of Europe: the historian of early modern religion, Ronald Hutton, has argued that the legend of the Wild Hunt may have influenced medieval and early modern ideas about the witches’ sabbath. The Wild Hunt has been adopted in a benign way by the followers of the pagan religion of Wicca. The leader of their Wild Hunt, which takes place on Halloween, is believed to be Hecate, Greek goddess of the night, the moon and necromancy.

In the arts, the Wild Hunt has been the inspiration for the Australian writer Tim Winton’s 1994 novel, The Riders, works by composers Franz Liszt, Carl Maria von Weber and Arnold Schönberg and Mike Mignola’s classic 1980s graphic novel series (and film franchise), Hellboy.