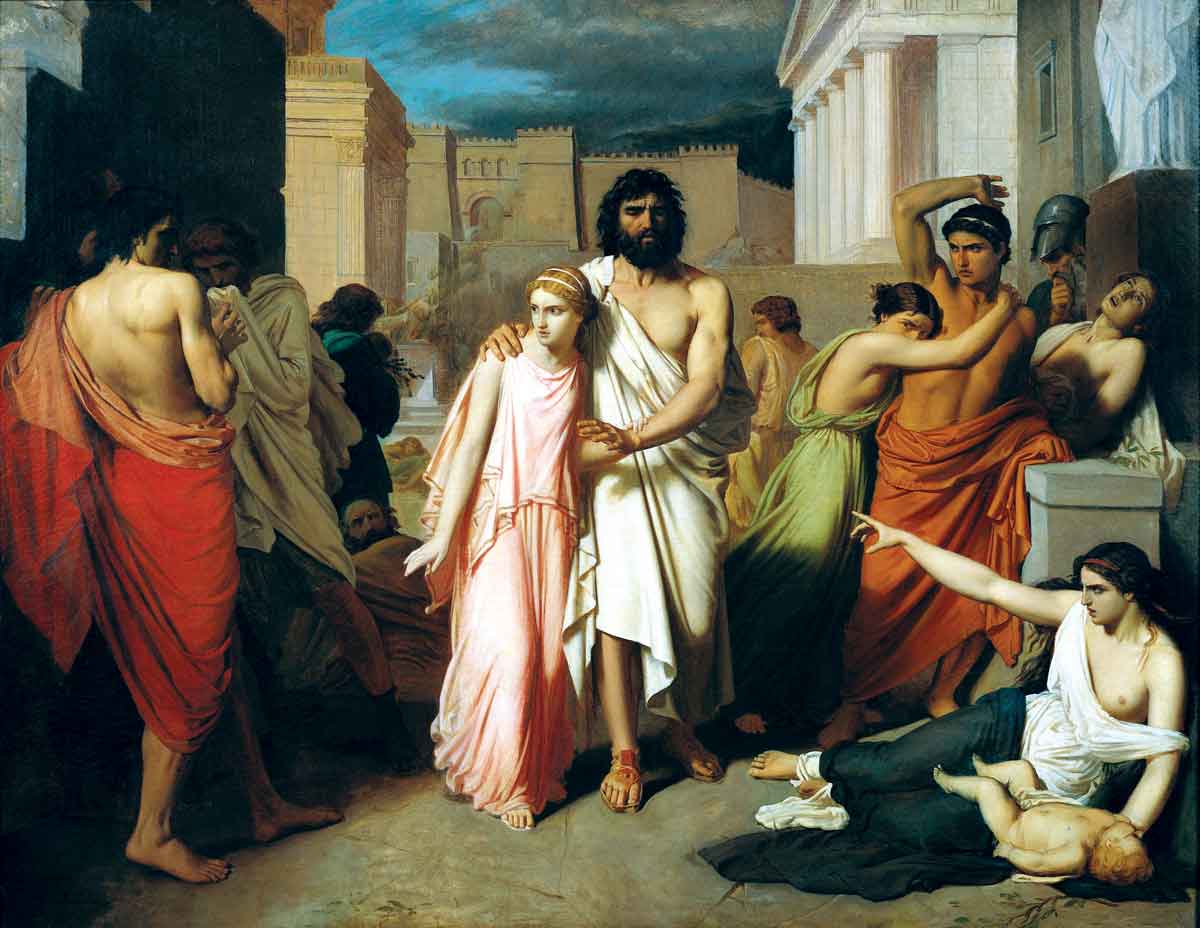 Oedipus, King of Thebes, is supported by his daughter (and half-sister) Antigone, as they walk though the plague-ravaged city. Oedipus became ruler after defeating the Sphinx, a creature with the head of a woman, the body of a lioness and the wings of an eagle. It sat outside the cursed city’s walls as a punishment from the gods. It would kill any traveller who failed to answer its riddle – ‘which creature walks on four legs in the morning, two at noon and three in the evening?’ Oedipus answered correctly – ‘Man?’ The Sphinx threw itself off a cliff and Oedipus was offered the city’s crown and its dowager queen, Jocasta.

He hoped to discover the cause of the plague that afflicted the city and sent his brother, Creon, to consult the Oracle at Delphi. The cause was religious pollution: Laius, the previous king and husband of Jocasta, had been murdered while travelling and the culprit had never been caught.

Oedipus, curious to know more, summoned the blind prophet Tiresias, whose reluctance to speak made Oedipus suspect him. Tiresias declared: ‘You are the criminal you seek!’ An angry Oedipus mocked the blind prophet, who responded that it was really the king who lacked vision. The murderer, said Tiresias, will be revealed to be both brother and father to his children, and son and husband to his mother.

Jocasta, while comforting Oedipus, revealed that Laius was prophesied to be killed by his own son, but had in fact been killed by robbers at a crossroads as he travelled to Delphi. This tale, meant to console Oedipus, alarmed him: he had abandoned his home in Corinth, having been warned that he would kill his father and marry his mother. On his travels, a carriage tried to drive him off the road at a crossroads and he then killed those inside.

The truth was that Laius and Jocasta had abandoned their baby son to a shepherd, Polybus. Jocasta, realising the awful truth, returned to the royal palace, where she hanged herself. Oedipus, in a rage, removed the gold pins from the dress of his wife and mother and blinded himself with them. He left their daughters, Antigone and Ismene, in the care of Creon and headed into bitter exile.

The story of Oedipus is arguably the most profound and influential of all the Greek myths, the basis of Sophocles’ fifth-century BC drama, Oedipus Rex. Filmed by Pier Paolo Pasolini, set to music by Igor Stravinsky and George Enescu, it was the basis of Sigmund Freud’s most famous psychoanalytic theory. 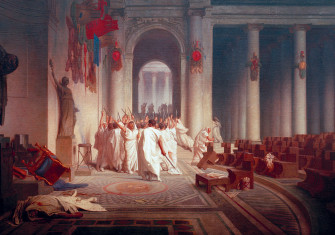 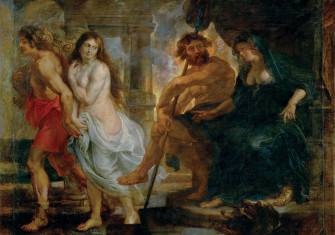