Holbein the Younger’s image still startles 500 years after its creation.

‘One could lose one’s faith from that picture.’ Those were the words of Fyodor Dostoevsky to his wife Anna on seeing this painting of a ‘startlingly dead’ Christ in the Swiss city of Basel in 1867. She dragged the great Russian novelist away from the image, fearing the shock might induce one of his frequent epileptic fits. So struck was he by the work, it would be referenced two years later in his novel The Idiot.

No one knows why or for what Holbein created the image, a long way from the elegant Tudor portraits for which he became best known. It could have been for a winged altarpiece, like Thomas Grünewald’s masterpiece in Isenheim, with which Holbein was familiar. Perhaps it was a public object of devotion, to be carried in procession, or a tomb cover? What is certain is that, five centuries on from its creation, it continues to astonish and to take its place among the masterpieces of the Northern Renaissance.

It has been claimed that the model for the dead Christ was a corpse retrieved from the Rhine. Emaciated, battered, unflinchingly grotesque, this figure is in the early stages of putrefaction, of rigor mortis, the glassy eyes open, as is the mouth. Three wounds of the Crucifixion are visible: on the side, the effect of a Roman lance; and nail piercings on the feet and on the cramped hand, from which a single finger extends.

Clues to the nature and originality of the composition can be found in Holbein’s biography. He was born in the free imperial city of Augsburg towards the end of the 15th century, moving to Basel as a journeyman painter just as the city was embracing the teachings of the Protestant reformers.

Holbein’s style was a strange and almost unique mixture of Catholic and Protestant aesthetics, both devotional and realistic, personified in this image of the dead Christ.

Holbein’s Son of God, painted when the artist was in his early twenties, is human, all too human, and one wonders what the devout must have made of so bereft and uncomfortable a portrait of their saviour. But, it has been argued, because the eyes and mouth are open, it is as if Christ is still able to see, even to speak, even when in so wretched a state. And the extended middle finger points the way to somewhere. Given the circumstances, the message seems to be that his Resurrection is even more miraculous than thought.

In 1526 Holbein travelled to England with letters of recommendation from the humanist philosopher Erasmus, where he would enter the circle of that other great humanist, Thomas More, and the court of Henry VIII. Holbein would portray Erasmus, the king and More, as well as the latter’s nemesis, Thomas Cromwell.

Holbein was to play a role in Cromwell’s downfall. His portrait of Anne of Cleves, who Cromwell had encouraged Henry VIII to take as his fourth wife, was thought ‘very lively’. But Henry was underwhelmed by the reality. There would be no resurrection of Cromwell’s political career after that. 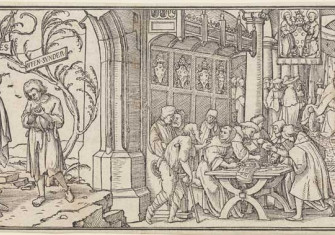 Portrait of the Portrait Artist 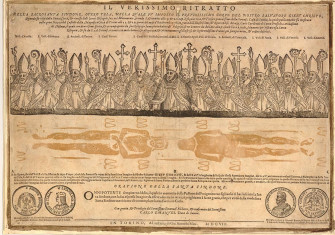