Britain and the United States may have been on the same side during the Second World War, but cinematic representations of the conflict could stir controversy between them, as Jeffrey Richards explains. 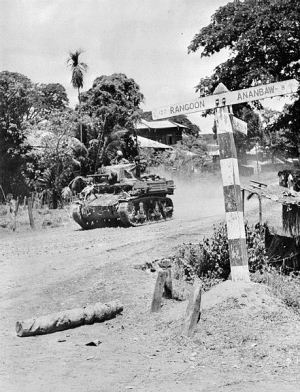 The official rhetoric of the Second World War emphasised the fact that the United Kingdom and the United States stood shoulder to shoulder in the fight against Fascism. But under the surface there were tensions that could flare up to sour the ‘special relationship’. For there remained strong currents of Anglophobia in the USA and of anti-Americanism in Britain. This tension was nowhere more true than in the field of cinematic representations of the conflict.

One film in particular became the focus of concern and that was Objective: Burma! (1945; Warners DVD), still remembered as the ‘film in which Errol Flynn won the war single-handed’. It became notorious in Britain when it opened because there had been no major feature film set in Burma; Britain’s 14th Army was deeply sensitive about its neglect, becoming known as ‘The Forgotten Army’; and Objective: Burma! concentrated exclusively on a single American military unit.

Both director Raoul Walsh and star Errol Flynn recalled the film in their autobiographies and, in so doing, reveal the danger for historians of relying exclusively on autobiographies for evidence. Walsh and Flynn record that the film was banned by the British authorities and that one newspaper depicted Flynn holding an American flag and standing on the grave of a British officer. These stories have been endlessly repeated. But the historian Ian Jarvie, returning to original sources, has demonstrated that they are in fact false.

The film originated in a request by Warner Brothers producer Jerry Wald to the writer Alvah Bessie to devise an original screen story set in Burma. Bessie came up with a story detailing the exploits of a patrol of American paratroopers sent to knock out a Japanese radar station deep in the Burmese jungle. The script was submitted, as was customary, to the US War Department Public Relations Bureau and a memorandum came back to say that there were few American troops in Burma and it was largely a British operation; that there were no paratroop activities in Burma; and the Japanese had no decent radar and no air superiority on which to capitalise. Warner Brothers agreed to add a newsreel prologue to the film stressing British involvement in Burma and to add a dedication at the end to British, American, Indian and Chinese troops fighting there.

Released in the United States in January 1945, the film gained excellent reviews. But on May 31st, 1945 several newspapers carried a Reuters report of an article by Colonel William Taylor, who had commanded American gliders in Burma, describing the film as ‘a sickening travesty’. Taylor’s comments were reported extensively in the British press and when the film opened in London on September 21st, 1945 the British press denounced it in outraged terms. Three popular papers – the Sunday Express, the Daily Mirror and the Evening Standard – called for it to be banned and it was condemned in an editorial in The Times. After a week Warner Brothers bowed to pressure from the press and withdrew the film. It was not seen again in Britain until 1952, but it was never ‘banned by the British authorities’. Ian Jarvie tracked down the cartoon by Philip Zec mentioned by Walsh and Flynn. It was published in the Daily Mirror on October 5th, 1945, but it did not feature Flynn. Instead it showed a typical Hollywood tycoon in a canvas chair surrounded by scripts marked ‘All American Burma Front’ and ‘All American defence of London’. A suited Englishman is politely pointing out ‘Excuse me – but you are sitting on some graves’. Beneath the chair are a series of graves marked ‘Britain’s sacrifice for world freedom’.

Aside from the controversy, what about the film? It is in fact an excellent example of a particular genre: the lone patrol film. It is not about the Americans taking Burma. It is a story of a single US army patrol and its fight against the jungle, the Japanese, the swamp, the heat, the flies, the fever, the exhaustion and the despair. Far from triumphalist, it is actually downbeat as only 11 of the original 50 patrol members survive. The director, action specialist Raoul Walsh, sets a relentless pace, stages battles and attacks superbly and, aided by Franz Waxman’s pounding score and James Wong Howe’s atmospheric photography, delivers a tremendously exciting genre piece. The Burmese jungle was convincingly recreated at the Lucky Baldwin Santa Anita Ranch near Pasadena, California.

The approved British version of the campaign came in the feature-length documentary Burma Victory (1945; Imperial War Museum DVD). It was the pet project of Admiral Lord Louis Mountbatten, Supreme Allied Commander, South-East Asia, and he planned it as a joint Anglo-American production. But this foundered over the total inability of the two sides to agree on the main theme of the film. The British wanted it to concentrate on the drive southwards to liberate Burma. The Americans, anxious not to be seen to be participating in the restoration of the British Empire, wanted to emphasise the building of the Ledo Road and the drive northwards to relieve the Chinese. In the end they went their separate ways, the Americans to produce The Stilwell Road and the British to make Burma Victory. It was the final production of the Army Film and Photographic Unit (AFPU) and was directed, like Desert Victory (1943), by Roy Boulting.

A vivid and powerful account of the campaign to liberate Burma, it stresses throughout, both visually and in the commentary, the hardships undergone by the troops: the monsoon rains, the dense jungle conditions, the loneliness, isolation and disease. Although it emphasises the ‘unorthodox and innovative’ leadership of Mountbatten, it also, as if in reproach to Objective: Burma!, lays continual emphasis on the multi-national nature of the campaign, praising the contributions of Americans, Chinese, Australians, Africans and Nepalese alongside the British. It underlines throughout the vital nature of the co-operation between air and land forces. It ends with the surrender of Japan, the guns falling silent and a final shot of a cross marked ‘A soldier of the XIVth Army’. Not released until after the war was over, it was hailed and promoted as ‘the real Burma film’.

Jeffrey Richards is Professor of Engilsh at Durham University