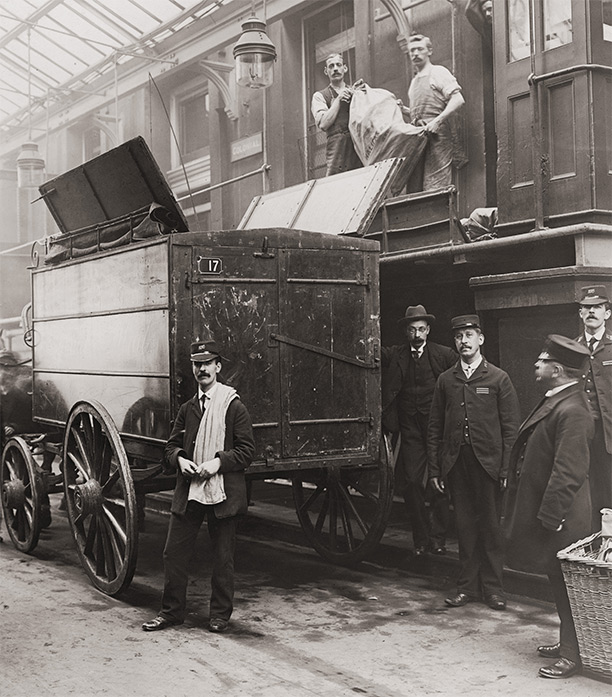 It is December 1898 and the inaugural dispatch of the first letters to be sent via the new Imperial Penny Post is soon to leave the General Post Office in London EC1. A sack of imperial mail is about to be slid down into a horse-drawn van via its roof from an upper sorting office. A London postman, with his empty sack over his shoulder, stands in front. The previous rate for a letter up to half an ounce in weight going abroad was tuppence halfpenny, but a successful campaign mounted by Sir John Henneker Heaton MP has brought about this reduction, although for the moment Australia, New Zealand and the Cape (South Africa) are excluded. Henneker Heaton had gone out to Australia in 1864, aged 16, and became a journalist and public figure in Sydney before he returned to England in 1884 and later set about agitating for a special imperial postal rate for the 22 million letters and postcards that were being sent to the colonies each year by the 1890s.

The idea of forging cheaper, more effective links between the mother country and its possessions, to back up the shipping lines criss-crossing the oceans and the cable network underneath, chimed with the imperial enthusiasms of the age, vigorously fanned by the colonial secretary, Joseph Chamberlain. The gathering of colonial premiers in London in 1897 for Queen Victoria’s Diamond Jubilee gave the opportunity to get them on side.  What could fit in better with the sentiments so aptly expressed by a loyal versifier from Cape Breton in Nova Scotia:

Here’s to Queen Victoria,
Dressed in all her regalia,
With one foot in Canada
And the other in Australia.

The wave of enthusiasm generated was big enough for all to overlook the fact that, even at the old higher rate, the Post Office had been losing money on overseas mails, since the contracts negotiated with the shipping companies in the 1860s were far too generous to them. So there was never any chance that this new initiative would pay for itself. With the contractual cushion beneath them, the Cunard, P&O, Orient, Union, Castle and Royal Mail Lines did not mind, happy to speed the mails in, for example, 38 days to Sydney, 17 to India and just over a week to Canada. The Indian mails went every Friday across the Channel to Calais; by Sunday night a special mail train had taken them far down Italy to Brindisi, where they were put on either of P&O’s fast packets, Isis and Osiris, for Port Said. There they were transferred to the Bombay steamship, which had left England a week before the letters, and then set off for the last leg through the Suez Canal, Red Sea and Indian Ocean. If the Cape to Cairo, Berlin to Baghdad and east-west Australian railway lines got built, the mails would get faster still.