The First of the Romanov Tsars is Crowned

The great Russian dynasty was founded on July 22nd, 1613. 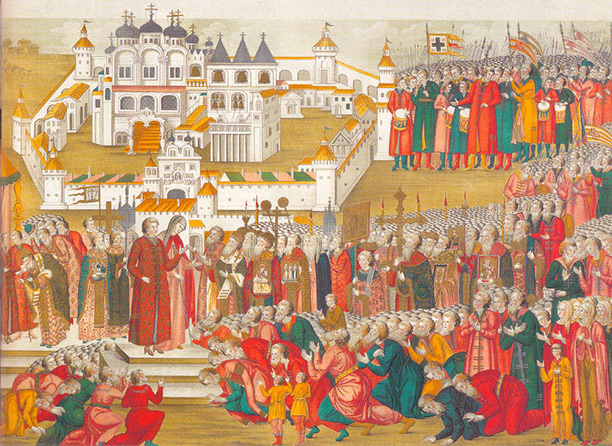 When Tsar Ivan the Terrible died in 1584 he was succeeded by Fyodor, the elder of his two surviving sons (he had killed his eldest son in a fit of rage). Fyodor was not quite right in the head and the power behind the throne was Boris Godunov, a trusted adviser to Ivan, who had made him Fyodor’s guardian. Ivan’s younger son Dmitri died in mysterious circumstances in 1591 at the age of eight. Godunov was suspected of having organised the boy’s murder.

When Fyodor died childless in 1598, Godunov took over as tsar. He feared the Romanovs, the family of Ivan the Terrible’s adored first wife, Anastasia Romanov, who had died in 1560. She was Fyodor’s mother. Godunov sent the head of the family, who was Anastasia’s nephew, into a monastery, where he was made to take vows as a monk under the name Philaret. That was meant to put paid to his political prospects. The others were exiled well away from Moscow.

Godunov’s death in 1605 set off what in Russian history is called the Time of Troubles. He was succeeded by his son, Fyodor II, who was murdered a few months later. A young man claiming to be Dmitri, the rightful heir to Ivan the Terrible (who allegedly had not died after all but had been hiding), installed himself in Moscow with the support of Polish, Russian and Cossack fighters, was crowned tsar and married a Polish princess. The Romanovs had returned to the scene and Philaret Romanov was raised to the rank of metropolitan (archbishop), but the False Dmitri was murdered in 1606 and the leader of his opponents, Prince Vasily Shuysky, was crowned in Moscow.

In the years of complicated muddle that followed rival groups of powerful lords (called boyars) supported different claimants to the Russian throne, while the Poles and the Swedes exploited the situation to their own advantage. In 1608 the Romanovs and others backed a second False Dmitri, who the first False Dmitri’s Polish wife improbably purported to recognise as her husband. He set up a rival court and military base at the village of Tushino, west of Moscow, while Shuysky gained the support of the Swedish king in return for land along the Russian border.

In 1609 the Poles invaded Russia and took Smolensk after a long siege. The Tushino regime collapsed and the False Dmitri fled to the south, where he was murdered in 1610. Shuysky’s backers deserted him and he was deposed that same year. The Romanovs and other lords offered the Russian throne to the son of the Polish king, but the king wanted it for himself and the negotiations broke down. A Polish force took possession of Moscow, but in 1612 a Russian uprising besieged them in the Kremlin, starved them to the point of cannibalism, promised them safe conduct if they surrendered and, when they did, killed them to the last man.

By this time chaos and desolation gripped much of the country after years of marauding armies, crop failures, famines and plague. There were roving gangs of bandits everywhere and large areas were deserted. As so often in human history, tyranny was found preferable to anarchy and, at last, late in 1612 an effective coalition of Russian lords summoned a national assembly to select a new tsar.

After some days of prayer and fasting and the consideration of various candidates, including Polish and Swedish princes, the assembly chose Mikhail Romanov, Philaret’s 16-year-old son, to be the new tsar. He was not present at the assembly, but a deputation found him staying in a monastery, where he seemed horrified at the news and professed himself unworthy to take on such a heavy responsibility. That was what he said at least, but he was persuaded that it was his duty to take charge and save his country from total collapse and he returned to Moscow to be crowned in the beautiful Cathedral of the Assumption in the Kremlin.

It took years of determined effort to bring peace and prosperity back to the country, but it was achieved. Treaties were signed with the Poles and Swedes, order was restored, trade encouraged and industries developed. A major role was played by Philaret Romanov, who was appointed Patriarch of Moscow and All Russia in 1619, while Tsar Mikhail was, or successfully posed as, a gently impractical, sweet-natured figurehead until his death, in 1645, on the day after his 49th birthday after a reign of 32 years. His son Alexei succeeded him and the Romanovs would rule Russia for over 300 years all told, until the revolution of 1917.