The Execution of Perkin Warbeck

The pretender to the English throne was hanged on November 23rd, 1499 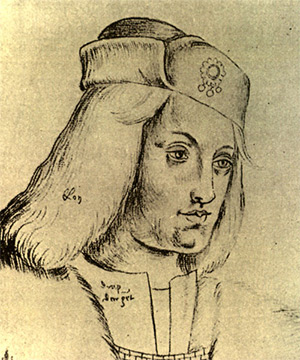 On November 23rd, 1499, Perkin Warbeck was drawn on a hurdle from the Tower to Tyburn to be hanged. A native of Tournai, his six-year masquerade as Richard, Duke of York had come to an end two years previously. He died, not for his imitation of a Yorkist prince, but because of a plot to overthrow Henry VII. A plot which also cost the life of the last Plantagenet, Edward, Earl of Warwick.

Warbeck's career as Duke of York began in 1491 in Cork where he was initially acclaimed as the Earl of Warwick. But soon he adopted the identity of Richard of York, the younger of the two 'Princes in the Tower'. He claimed to have been permitted to escape when his brother was murdered, a story sufficiently plausible to be accepted by those who wanted to believe it.

Warbeck's welcome in Ireland fell short of that accorded an earlier Yorkist pretender, Lambert Simnel, in 1487. So he began a long migration around the courts of Europe in search of support. He was received as Richard of York by Charles VIII of France; by Margaret of Burgundy, who acknowledged him as her nephew, and he attended the funeral of Emperor Frederick III in 1493 at the invitation of Maximilian I.

Warbeck made his first attempt to invade England with the help of Margaret of Burgundy. A small force landed near Deal on 3rd July, 1495, hoping for popular support. Instead they were routed. Warbeck abandoned the venture without even disembarking and again made for Ireland. With the support of the Earl of Desmond he besieged Waterford, but when the town resisted he was again forced to withdraw, this time to Scotland.

In Scotland Warbeck was well received . He married the king's cousin, Lady Catherine Gordon, and was granted a monthly pension of £112, a clear indication that James IV accepted his claim to the English throne. But the subsequent Scottish invasion of England in his support in September 1496 was a fiasco: no public backing was forthcoming from Northumberland and the Scots withdrew without meeting the English forces. The episode served only as an excuse for Henry to raise taxes for defence. Now an embarrassment to the Scottish king, Warbeck returned once more to Ireland.

A rising in Cornwall against the tax increases in June 1497 encouraged Warbeck to expect support there. On September 12th he arrived near Land's End with just 120 men in two ships. This final invasion was by far the most successful; his force was several thousand strong by the time it reached Exeter. His supporters, however, were unarmed and when Exeter resisted, Warbeck was forced to move on. When the King's army reached the rebels Warbeck realised there was no hope and fled for the coast. He took refuge in Beaulieu Abbey and then surrendered.

In his confession to Henry at Taunton on October 5th, 1497, Warbeck admitted that he was the son of a bourgeois of Tournai. He said he had come to Cork in 1491 as a merchant's apprentice and had been 'recognised' as a Yorkist prince. Though some of the ringleaders of the Cornish rebellion were executed, Warbeck was merely taken into custody until he tried to escape in June 1498. He was then sent to the Tower.

Early in 1499, yet another false Warwick had been set up in opposition to Henry. Though the plot was quickly suppressed it may have convinced the King of the wisdom of disposing of Warwick altogether. An agent provocateur may have been employed. Warbeck and Warwick were confined in neighbouring cells and one of Perkin's erstwhile supporters was appointed gaoler. An informer gave away the plot: to burn down the Tower, escape to Flanders, and place Warwick on the throne. The false pretender and the true pretender along with several others, including the gaoler, were found guilty of treason. Perkin Warbeck was hanged on November 23rd; the Earl of Warwick was beheaded on Tower Hill on the 29th.