The Eunuchs are Expelled

Roger Hudson tells the story behind a moment of violence in 1923 outside China's Forbidden City in Peking. 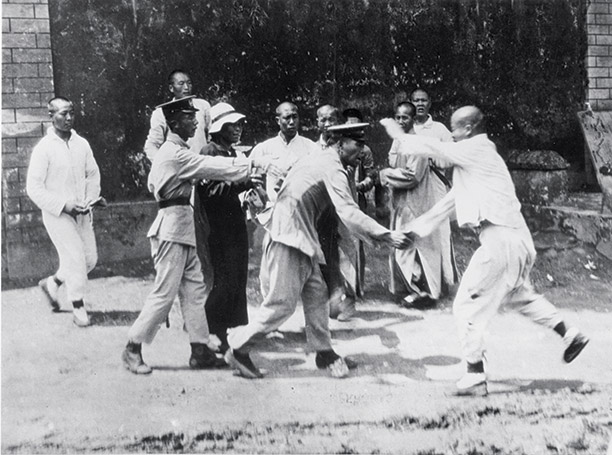 Eunuchs, formerly part of the Chinese imperial household, scuffle with police outside the emperor’s palace, the Forbidden City or the Great Within, in Peking after they have been expelled in 1923. In fact the empire itself had ceased to exist and the Qing dynasty had come to an end in 1912, but the child-emperor Hsuan T’ung, or Puyi, then aged six, was allowed to go on living in the Forbidden City. He never liked the hundreds of eunuchs that still formed part of his entourage: ‘By the age of 11 flogging a eunuch was a part of my daily routine . . . Whenever I was in a bad temper the eunuchs would be in for trouble.’ So when his Scottish tutor, Sir Reginald Johnston, blamed the eunuchs for starting a fire in order to destroy the evidence that they had been selling off works of art from the imperial collection, Puyi, by now 18, used this as an excuse to send them packing.