The English came late to gardening, but they have more than made up for it. During lockdown, many people, at least those fortunate enough to have access to some kind of outside space, found solace in gardening. Germans refer to gardening as the ‘English art’ and it is telling that the nation’s garden centres were among the first institutions to re-open to the public. And yet the English were relatively late to their art form. In the middle of the 16th century, the Italians and French were the masters of garden design, horticulture was the domain of the Dutch, while Spain and Portugal, with their vast overseas territories, were entranced by the exotic plants brought back to Iberia. A century on, things had changed, as the historian Margaret Willes points out. Charles II had inherited a powerful navy and possessed lands in the Americas and the Caribbean that provided exotic plants – he was obsessed by the pineapple – which prospered in a temperate climate ideal for cultivation, especially when supplemented by the enormous advances in knowledge made possible by the likes of the Society for Improving of Natural Knowledge, or the Royal Society. By 1664, John Evelyn, having travelled the Continent, could compare England’s diversity of people with the variety of its flowers, ‘transplanted into our British elysium’.

Sadly, few of the gardens typical of the Tudor and Stuart period survive. The enduring image of the English garden now is that of the 18th century, the landscapes of Capability Brown and his contemporaries: a grand house with extensive grounds, paid for by Empire and the Industrial Revolution. But there are echoes still of those earlier enterprises.

Newspapers are full of articles about where to go when normality returns. But arcadia is often close to hand. Walter Stonehouse, a Yorkshire vicar, made designs for his rectory garden that are now held in Magdalen College, Oxford, where he was a fellow. They inspired the Stuart gardens at Moseley Old Hall, a National Trust property just north of Wolverhampton, one of Charles II’s hideouts when he fled the Battle of Worcester. A place of quiet abundance, it will be among the first places I’ll visit. 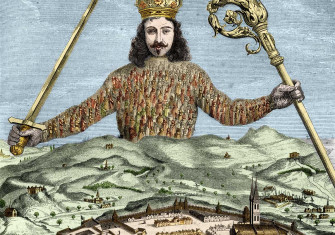