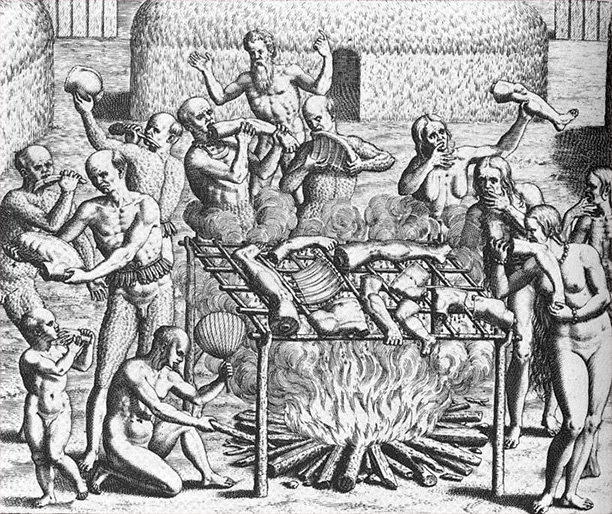 One soldier told how a specialist in my unit kept a human finger in his wall locker during his entire tour of duty. The laughing ensued as I heard the story of a soldier in another company eating the charred flesh of an Iraqi civilian, the victim of an IED attack aimed at American forces. I thought about how callous these men had become, and how horrified I was at the idea of disrespecting human life in such a manner.

The words are those of Brad McCall, a former US soldier who deserted his unit and fled to Canada in 2007. History affords many such examples of aggressive cannibalism used to terrorize enemies.

To eat your enemy is to perform an extreme form of physical dominance. Intrusive proximity is associated always with contempt, and it finds its most extreme form in aggressive cannibalism. It was all too clearly present in the case of the American soldier whose behaviour provoked not horror but laughter from his peers.

Cannibalism is far from being merely ‘senseless violence’, as we see when we consider tribal cannibalism. Some tribal peoples have practised consensual cannibalism as part of their rituals of mourning and burial. American anthropologist Beth Conklin has uncovered complex funeral ceremonies among the Brazilian Wari’ – a tribe that had been practising reverential cannibalism on its dead until the Brazilian government intervened in the 1960s. Here cannibalism was not a pleasure but a duty. In some cases, with the corpse several days old, tribe members forced themselves to eat flesh so putrid that it made them nauseous. It would have been disrespectful not to do so.

In the early modern period, various European observers documented rituals surrounding hostile cannibalism. Such behaviour was motivated by deeply embedded notions of Us and Them. The French traveller André Thevet made this abundantly clear in his account of the Brazilian Tupinamba (1567).

They have been always their mortal enemies ... they say we have eaten your parents, also we will eat you, with many other threatenings ... The greatest vengeance that these wild men use, and that seemeth to them most cruel, is to eat their enemies.

Other examples underline this impression of controlled and meaningful violence. In the seventeenth century, the Canadian Iroquois were observed by European missionaries. Citing their evidence, the cultural historian Peggy Reeves Sanday emphasizes the cosmic significance of Iroquois cannibalism. Prolonged ordeals of torture – designed to test the strength and courage of the victim – involved repeated lacerations and burnings. Yet these attacks were countered by moments of humorous, even gentle treatment from his tormentors. And the captive would in fact co-operate because he understood himself to be observed by the sun-god during his trial.

Daniel Korn, Mark Radice and Charlie Hawes (2001) point out that Europeans who encountered Fiji island cannibalism in the early nineteenth century found an essentially religious motivation for the consumption of an enemy – it was believed that the spirit of a dead person remained with the body for four days, and that if you ate the corpse before this time elapsed, you ‘prevented it from ascending to the spirit world and becoming a source of power and guidance to your enemies’.

Though Christian Europeans shunned the cannibalism of the New World, they themselves in fact practised cannibalism more systematically than any tribes in Canada or Brazil. Until around 1750, human fat, flesh, bone and blood (preferably drunk warm) were widely used and esteemed forms of medicine. Advocates and consumers included Francis Bacon, Robert Boyle and Charles II. Meanwhile, from the early sixteenth century, Protestants and Catholics in northern Europe  denounced and slaughtered one another with tribal ferocity, even as each side attacked the ‘cannibal barbarity’ or inhumanity of the other. Frank Lestringant (1997) tells how, around 1580, a French Protestant was killed and eviscerated by Catholics. His heart was next ‘chopped in pieces, auctioned off, cooked on a grill and finally eaten with much enjoyment’.

Elsewhere such savagery might be inspired by social antagonisms. Historian Piero Camporesi (1988) tells of violent aristocratic feuds in early-modern Italy. In one case, a victim’s disembowelled heart was bitten. In a second, the narrator tells us, ‘lucky was the man who might grind the entrails between his teeth’. In a third instance, a man was tortured and killed before being disembowelled. After gnawing his intestines, his attackers proceeded to ‘cut him up into small pieces to remove his fat because he was young, being probably twenty-eight years of age, tall and slim in build’. In Camporesi’s view, the emphasis on the victim’s youth and stature betrays an intention to sell this fat to ‘pharmacologist-doctors’ who would find it ‘beneficial to all nervous ailments’. Given the trade in cannibalistic medicine, the inference looks all too plausible.

In these incidents the aggressors do not actually eat, but enact their dominance by cannibalistic gestures. Such gestures violently break taboos, yet avoid the possibility of being contaminated by the substance of their victims. In a broadly similar way, selling Orsi’s fat is a form of derisive exploitation, and one that procures someone else to do the actual consumption.

Aristocratic revenge feuds, by their nature, have a certain amount of history behind them. Yet some startling episodes of cannibalism in the twentieth century involved a hostility that developed over a very short space of time. Korn, Radice and Hawes document events in China during the Cultural Revolution, a time when ‘just killing the class enemy was not enough to express class hatred’. At a school in Wuxuan Province, students turned against their teachers. The head of the Chinese department, Wu Shufang, was condemned as a class enemy and beaten to death. Another teacher was forced to cut out Shufang’s liver, which was then cooked in strips over a fire in the schoolyard. In another incident, a young man was tortured because he was the son of a former landlord. The attackers cut open his stomach and removed his liver, which ‘made a revolutionary feast for the villagers’. Around 10,000 people probably took part in acts like these, with up to a hundred victims being eaten. In this case the violence was overtly political, yet had the intensity of tribal or religious antagonism. Many of those involved were still teenagers.

How does the cannibalism described by McCall in Iraq compare with the man-eating of tribal societies? Most US citizens would distance themselves from such behaviour, whereas the cannibalism of the Tupinamba, the Iroquois and the Fiji islanders was accepted by all members of those societies, even by its victims. Notions of honour or respect were at work here: a courageous victim was worth eating. To McCall, however, the man-eating soldier was guilty of ‘disrespecting human life’. Moreover, his disrespect was blunt in its aim, stretching even to those Iraqis he was supposed to protect, not only to legitimate enemy combatants. But it is also noticeable that the American soldier’s cannibalistic act has a certain social dimension. Those soldiers who hear of this with laughter are themselves a kind of tribe, who implicitly enact a communal celebration of shared values. The difference is that, in 2007, cannibalism was a daring individual transgression, not a cosmically meaningful ritual.

Richard Sugg is the author of Mummies, Cannibals and Vampires: the Human Body in Religion, Medicine and Science from Shakespeare to Dracula.