The English polymath died in London on March 3rd, 1703. 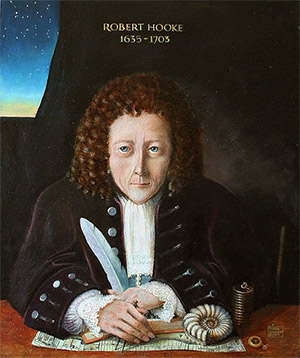 One of the most brilliant and versatile figures of his time, Robert Hooke (1635-1703) died a disappointed man. His own law, Hooke’s Law, has to do with elasticity, but he brought a piercing intelligence and inventiveness to bear on a remarkable range of fields – anatomy, astronomy, geometry and geology among them – at a time when science was young and not yet compartmentalised. Hooke proved the rotation of Jupiter on its axis and determined the rotation period of Mars. He discovered that light rays bend round corners (diffraction) and put forward the wave theory of light to account for it. He investigated the action of the lungs and identified the role of air in combustion. He studied the crystal structure of snowflakes and the honeycomb structure of cork. He was interested in music and acoustics, and he designed balance springs for watches. He suggested the manufacture of artificial fibres by copying the action of silkworms. He examined fossils and tried vainly to get the history of the Earth examined in a non-Biblical light.

Stephen Inwood’s recent biography, The Man Who Knew Too Much, shows Hooke interested in virtually everything. He devised improved scientific instruments – thermometers, telescopes, microscopes, pendulums and pumps – as well as a pedometer, a marine barometer, a depth sounder and various navigational instruments. He made advances in the study of insects and lectured on the medicinal properties of cannabis. He worked on machines for making cider and measuring the wind. He considered the possibilities of flying machines, long-distance signalling systems and bouncing shoes, which would shoot the wearer twelve feet up in the air. Not content with all this, he was also a practising architect who worked with Christopher Wren on the rebuilding of the City of London after the Great Fire of 1666.

The other side of the coin was that Hooke, who was fiercely competitive, became eaten away with resentment because he believed that he was denied proper credit for his achievements and made too little money out of his inventions. People grew weary of his complaints that practically every new invention or idea that came along had been anticipated by him years before, but ignored. He was the Royal Society’s curator of experiments from 1662 and a fellow from 1663, but the Society’s failure for many years to elect him to its council rankled and he had a long, bitter wrangle with Isaac Newton, whom he accused of stealing his work without acknowledgement. It was not until Hooke died that it became possible to elect Newton to the Royal Society’s council.

Hooke’s last years were pitiful. His health deteriorated sharply in 1697, his sight and his legs began to fail him and he became increasingly ill-tempered and miserly. Stooped, short of breath, unwashed and sleeping in his ragged clothes, he finally died in his rooms at Gresham College in the City, alone in the middle of the night, at the age of sixty-seven. His emaciated body so swarmed with lice that no one wanted to touch it, but in an iron chest in the room there was a hoard of coins worth, in today’s money, close to £1 million.