Death of King Ethelbert of Kent

The first English king to be converted to Christianity died on February 24th, 616. 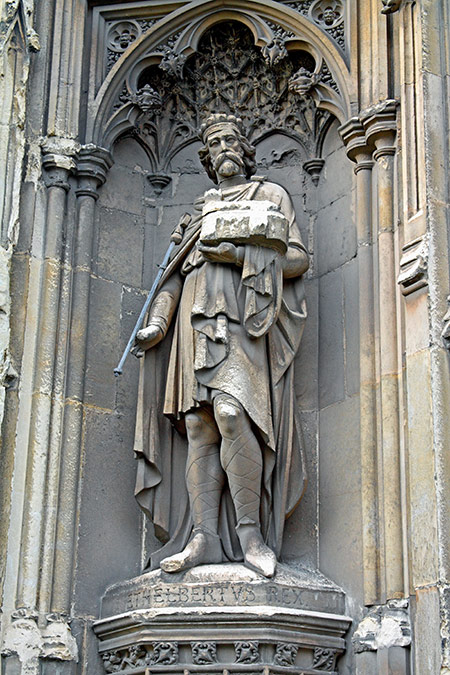 Ethelbert was the first English king to be converted to Christianity, which proved to be a crucial event in the development of English national identity. In 597 a Roman monk called Augustine arrived in Kent as leader of a group of missionaries sent by Pope Gregory the Great. There were plenty of Christians in Britain already and had been ever since Roman and early Celtic times, before the country was invaded from the mid-fifth century onwards by pagan English of various Germanic tribes, who in time set up small kingdoms.

Augustine’s mission was not to establish British Christianity, but Roman Catholic Christianity. Ethelbert’s wife, Bertha, was a daughter of the Merovingian Frankish king in what is now France. She was a Christian and it was a condition of the marriage that she would be free to practise her religion. Ethelbert evidently considered that an acceptable price for a close connection with the most powerful ruler in western Europe.

The details and dates are often uncertain, but Bertha brought a bishop with her from France as her chaplain and presumably she had her own Christian retinue as well. For worship she restored the ancient church of St Martin of Tours, which dated back to Roman times. Ethelbert had consequently been in close touch with Christianity and he soon accepted it for himself. His household followed suit and pagans lower down the social scale in Kent found it in their interest to be baptised in numbers in the local rivers. Ethelbert now presided over the creation of a law code which gave the Roman church a secure place in the kingdom. Augustine was made Archbishop of the English on the pope’s orders and he appointed bishops of London and Rochester before his death in 604. London was in the kingdom of Essex, which was ruled by Ethelbert’s pagan nephew Sebert, who had also became a Christian convert.

Bertha died in or soon after 601, it seems. Ethelbert apparently took a second wife. When he died in 616 he was buried in what was later St Augustine of Canterbury’s abbey. He was succeeded by his son Eadbald, who had reverted to paganism. He horrified the Roman clerics by marrying his father’s second wife, which was strictly against the rules, but he afterwards reverted to Christianity. Augustine, Bertha and Ethelbert were all later canonised as saints.

In time, other pagan English kings were impressed by the Roman Church’s positive support for strong regimes, which in turn made religious control easier. These kings accepted the Roman church and carried their people with them. Over centuries the process would lead to the creation of a single unified English nation.