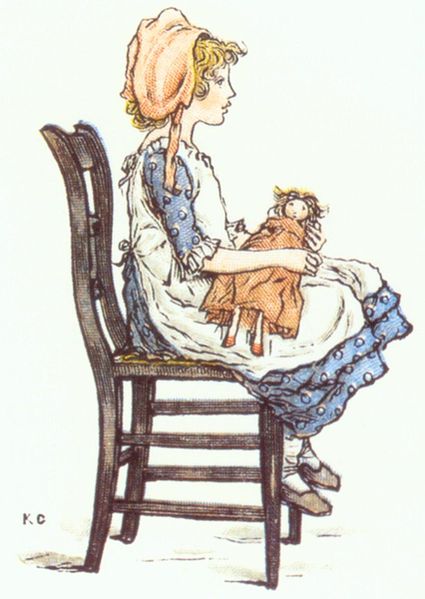 The uncrowned queen of the golden age of children’s book illustration was fifty-four when she died at her house in Hampstead. Designed for her by Richard Norman Shaw, the house was a tangible proof of success, for she had started life in modest circumstances in Hoxton in 1846. Her father, John Greenaway, was a wood engraver who worked on the Illustrated London News and in the 1850s her mother kept a ladies’ outfitters in Islington, where the family lived above the shop in Upper Street. Kate spent her childhood summers with relatives in the country in Nottinghamshire and it was to an idyllic countryside that she turned for inspiration. She loved her childhood and recalled: ‘I hated to be grown-up and cried when I had my first long dress.’

After studying at the Slade School, she got work from Christmas and Valentine card manufacturers as well as publishers of children’s books and magazines. Early titles in the 1870s included Fairy Gifts or a Wallet of Wonders by Kathleen Knox and Starlight Stories Told to Bright Eyes and Listening Ears by Fanny Lablache. Kate made her name with Under the Window, Pictures and Rhymes for Children, which apeared in time for Christmas 1878 and sold out in a flash with the bookshops clamouring for copies. Illustrated editions of two books by Charlotte M. Yonge followed. In 1880 came Kate Greenaway’s Birthday Book for Children and in 1881 Mother Goose or the Old Nursery Rhymes. Typical later titles included Jingles and Joys for Wee Girls and Boys, Language of Flowers, Baby’s Birthday Book, Kate Greenaway’s Album and Kate Greenaway’s Alphabet. She did an illustrated edition of The Pied Piper of Hamelin and in 1885 specially for John Ruskin her version of Dame Wiggins of Lee and Her Seven Wonderful Cats. By this time her books were being ruthlessly imitated and pirated, while Greenaway dolls, children’s fashions, pottery and wallpapers were selling in quantities in Britain and abroad. In France there was a whole children’s dress style called ‘Greenwayisme’. Kate issued her own annual Almanack from 1883 to 1897 and her last production, in 1900, was The April Baby’s Book of Tunes by Countess von Arnim (the author of Elizabeth and Her German Garden).

Frightful as some of these titles may sound, Kate Greenaway’s illustrations had extraordinary charm. They showed saucy or demure curly-haired children in old-fashioned clothes – pretty girls in frocks, smocks and bonnets, boys in hats and short jackets – living in an innocent world where no serious harm would ever come to them. Her own life, however, was very different. Dumpy, plain and shy, she never married and had no children herself. Instead she was taken over by Ruskin, who when they met in 1882 was sixty-three to her thirty-six. He greatly admired her and from then on supervised her work and dominated her life. He always admired childish innocence in women, and the type of ‘girlie’ Kate portrayed, and Kate was mesmerised by him. They spoke baby-talk to each other, he was her ‘darling Dinie’ and they signed their letters with varying numbers of kisses according to mood. He wanted her to do drawings of her child models in the nude and send them to him, but she declined. The relationship was almost certainly never consummated, but her devotion to him survived his ill temper, his fits of madness and his eventual senility and lasted until his death in 1900.

She herself then had litle time left. In 1899 she had been diagnosed with breast cancer, which she kept secret from everyone. The pain was abominable, the cancer spread to her lungs and breathing became almost impossible. Hampstead was silently blanketed in November fog when the end came at nine o’clock on the evening of the 6th. Privately and with the minimum of fuss, she was cremated at Woking and on the 13th her ashes were buried in Hampstead Cemetery next to her father and mother. On her headstone was inscribed a verse she had written for the occasion:

Heaven’s blue skies may shine above my head,
While you stand there – and say that I am dead!