The Death of Hernando Cortez

The man who conquered Mexico died on December 2nd, 1547. 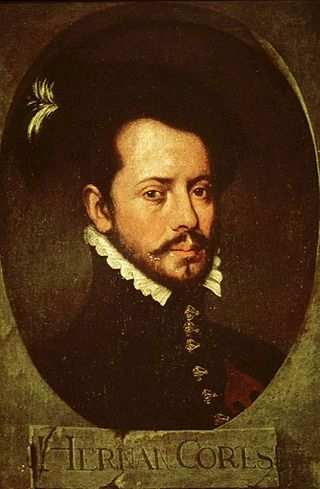 By modern Western standards, the Aztec nation of Mexico was a barbarian one, then again, so was the conquistador army of Hernando Cortéz that destroyed it in 1521. By the time Cortéz died, twenty six years later on this day in 1547, the native peoples of central America were living under the rule of Spain.

'They were not the stuff of which bureaucrats are made' wrote one historian of the conquistadors with heroic understatement The men who were sent to America to extend the Spanish Empire were, by necessity, largely desperate individuals, men who had little to lose in sailing to an unknown and dangerous territory Many were seduced by the promise, usually illusory, of gold and unimaginable riches for the taking. This partly explains their savage behaviour once they arrived on the continent, but does not take into account the machinations of their leaders, especially Cortéz.

Although he never did, Cortéz wanted to rule Spain's colony in central America In this sense he was a young man in a hurry, anxious to destroy the existing Aztec civilisation under its leader, Moctezuma, and establish his own power base. As a non-aristocratic man from Extramadura, a bare and outlying part of Spain, Cortéz, like many conquistadors, knew the only way he would ever be a powerful land-owning dynast would be in the New World rather than the Old.

In this situation, the Aztecs stood little chance When the Spanish arrived in the capital Tenochtitlan in 1519, Moctezuma greeted them wanly but amicably. The Aztecs were not a primitive people They were certainly aggressive and often gruesome in their practices – human sacrifice to the gods was a daily part of life – but their civilisation was highly developed and their capital city, artificially built on a lake for protection, was beautifully laid out around a sophisticated temple complex. It was also larger and more populous than many Spanish cities, including Seville, Granada, Toledo and Valencia.

At first the Spanish were friendly, exchanging gifts and behaving well, but Cortéz soon seized Moctezuma and held him hostage. When Moctezuma died in June 1520, the Aztecs finally rose up and drove the Spanish out. But the conquistadors soon returned and razed the city in August 1521.

Cortéz was not master of Mexico. But having won the territory by force he found it difficult to rule. As the years went by Cortéz, the self styled Captain General of New Spain of the Ocean Sea, administered the Colony in an increasingly arrogant and regal manner. The colony was full of men as ambitious and ruthless as himself who formed themselves Into pro and anti-Cortez parties. Rumours were spread that he had murdered his wife, complaints made about this highhanded style, plots hatched against him. Finally, officials were despatched by Spain to help administer the colony, which did not improve Cortéz already volatile and bitter temperament.

Cortéz never achieved the title of Viceroy he so desired He had made too many enemies. In 1540 he gave up and returned to Spain, leaving behind the colony he had created by the force of his personality. He would never truly rule the empire he helped create. But, even so, he had established a form or rule that was every bit as influential as Britain's interventions in North America while an independent USA adopted the parliamentary democracy of its former colonial master, most South American states, or at least the generals and dictator politicians that rule them, favour something more along the lines of Cortéz and the conquistadors, and with equally bloody results.