The Death of Clément Méric Foretold

The recent killing of a French teenager by fascist sympathisers recalls the tensions and divisions of the 1930s, says Chris Millington. 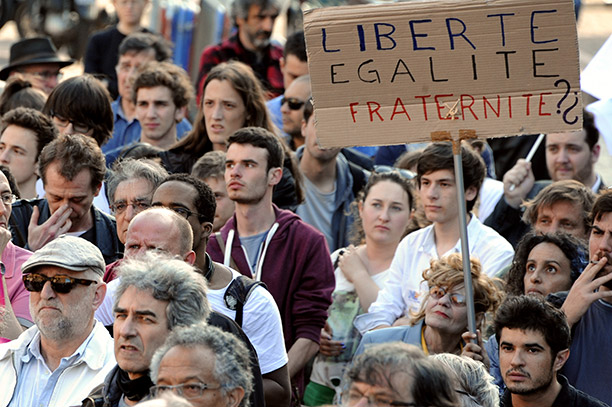 On June 5th Clément Méric, an 18-year-old anti-fascist, died in front of shoppers following a fight with a skinhead gang in the well-to-do ninth arrondissement of Paris. According to press reports Méric and several friends had encountered the gang, who were wearing t-shirts bearing neo-Nazi slogans, at a discount sale for sportswear. An altercation followed and insults were exchanged. The skinheads left the shop, only to attack the young anti-fascists in the street outside. Méric received several blows from a knuckleduster before falling and striking his head on a post. He died soon after. A variety of left-wing and anti-fascist groups staged street demonstrations in central Paris and elsewhere against fascist violence. The incident has sparked a debate in France about the violence of fascist groups, with the Minister of the Interior Manuel Valls declaring his desire to ‘eradicate this violence that bears the mark of the extreme right’. A ban on such groups looks likely.

A similar debate was played out in France 80 years ago. Compared with the violence committed in Germany and Italy prior to the accession to power of Hitler and Mussolini, political violence in interwar France is less well known. French historians, keen to downplay the strength of fascism in their country, have claimed that confrontation was limited to furious attacks in the press and displays of bravado in the street. These historians do not deny that violence could break out sporadically, such as when nationalists rioted in Paris on February 6th,1934, but given that activists daily threatened to wreak bloody vengeance on their enemies, rarely did they come to blows.

However France was not immune to the political violence that engulfed the rest of the Continent. On the extreme right­ uniformed paramilitary groups, such as the Jeunesses Patriotes and the Solidarité Française, regularly beat their opponents with canes, truncheons and knuckledusters. It was not uncommon for these groups to plan attacks against rivals’ political meetings, trashing the meeting hall and thrashing rival speakers. Left-wing activists responded in kind and also committed premeditated attacks, such as when Communists shot and killed four nationalists at the rue Damrémont in Paris in April 1925. Violence was usually confined to beatings in the street, but fatalities were not uncommon and 60 people were killed in violence involving political groups in the period of sharpest conflict between 1934 and 1938.

Political violence concerned groups on the left and the right. Aware of the situation in Germany, socialists and Communists saw right-wing violence as the precursor to a fascist takeover in France. Conservatives believed left-wing violence was the harbinger of revolution and civil war. There are parallels to be drawn between the response of the left to Méric’s death and the actions of the interwar anti-fascists. During the 1930s the socialist and Communist parties staged large counter-demonstrations designed to deter fascist paramilitaries from violence with a non-violent show of strength. Such protests were usually held outside extreme right-wing political meetings and were informed by the Communists’ desire to involve the masses in anti-fascist action. Activists would encourage the general public to attend in order to engage them in the struggle and foster support for the Third Republic. Left-wing politicians have sought to couch the response to Méric’s death in similar terms: as a neo-Nazi attack against the Republican values that France holds dear.

Likewise a ban on extreme right-wing groups was implemented in June 1936. The banning of the antisemitic Action Française, a remnant of the Dreyfus Affair, in February 1936 set a precedent for legal action against such groups. Members of Action Française had committed a brutal act of violence against the socialist leader and future prime minister of France Léon Blum, who required medical attention. Shocked parliamentarians quickly moved to ban the group. In June that year the newly elected Popular Front coalition outlawed the remaining right-wing paramilitaries. However this did not bring a complete end to political violence. The outlawed groups were re-founded as political parties and some maintained their fighting wings. Colonel François de La Rocque’s Croix de Feu, for example, became the ostensibly more respectable Parti Social Français, yet its leather-clad ‘propaganda flying squads’ continued to fight anti-fascists in the streets and meeting halls of France.

If we can learn anything from the political violence of interwar France it is that such incidents are impossible to predict. Fighting usually erupted following chance encounters between activists. The left’s purported desire to hold non-violent counter-demonstrations rarely worked out in practice. Socialist and Communist activists were quick to resort to force themselves and protest marches could end in bloodshed as often as not. The ban on paramilitary groups did reduce the frequency of incidents, but violence was still always a possibility when opponents clashed. In France, as in most of Europe today, this kind of political tactic is less acceptable than during the interwar period. Political groups from the Communist Party to Marine Le Pen’s Front National have united to condemn Méric’s killing. While, in the 1930s, the left-wing Popular Front and the extreme right-wing leagues all condemned the violence of their enemies, they were less willing to condemn the aggressions committed by their own members, which were always characterised as ‘legitimate self-defence.’ Nevertheless, the experience of the Popular Front tells us that it is in legal sanction and public involvement in anti-fascist action, and not in violent retaliation, that the solution lies.

Chris Millington is a lecturer in 20th-century history at Swansea University and the author of From Victory to Vichy: Veterans in Inter-war France (Manchester University Press, 2012).